Talking Bars with the Tablehopper

Marcia Gagliardi is known as the Tablehopper, a woman who eats her way through San Francisco restaurants and reports on the happenings in her weekly newsletter. I know her as a girl who loves her bourbon.

She wrote a book called The Tablehopper's Guide to Dining and Drinking in San Francisco: Find the Right Spot for Every Occasion

. I decided to interview her about the book and skip all the blah blah blah about food. 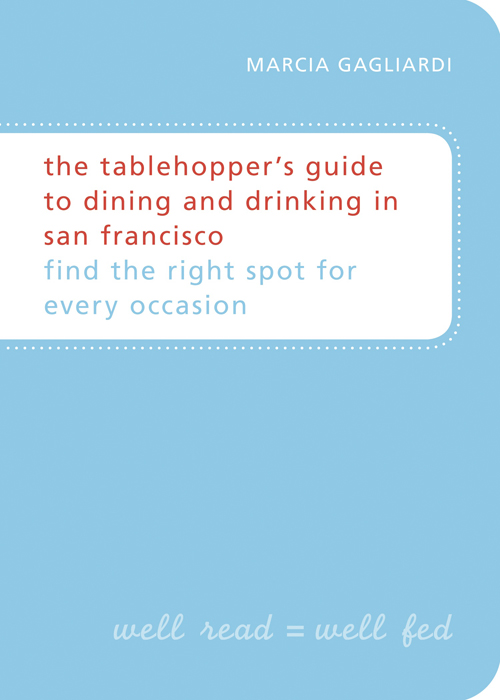 Camper English: I love the book. I was skeptical about any book of restaurant information because it all changes so fast, but I realized when reading it that flipping through restaurant reviews on the internet is no fun. I found lots of venues I'd not heard of that are now on my to-do list. That said, mostly I eat garnish so let's keep this interview to bars, okay?

Fishermen's Grotto #9 sounds tacky and amazing. How did you find this place- are you secretly hanging out at Fisherman's Wharf with the tourists?

Tablehopper: Truth be told, I actually was checking out a few restaurants to see if the tourists knew something I didn’t. And guess what? They did! Scoma’s rocks. As for the Grotto, I have a friend who knows how much I love vintage bars (alas, a disappearing genre), and she told me the Fisherman’s Grotto #9 was the most incredible time capsule. Boy, was she right. I’ve actually brought three friends there for drinks, and everyone agrees I need to throw a Rat Pack party there. Abalone and martinis?
http://www.fishermensgrotto.com/

I haven't been to the neighborhood in years but it's good to know there is a bar waiting for me the next time I get off the Alcatraz tour boat. Let's play "Name the secret bastion of alcoholic goodness in an otherwise craptastic neighborhood."

Round One: The Richmond
Tommy’s! The high church of hangovers. My buddy Jamie runs the 540 Club on Clement—and they even host literary/boozy events with neighboring Green Apple Books. But it’s such a smoker patio bar that this ex-smoker can’t bear it any more. Stinky patrons! I do think Would You Believe? wins for my favorite sign. And props to McKenzie’s Bar on Geary for absorbing my birthday posse after we feasted on a banquet dinner at Hong Kong Lounge next door. The sassy bartenders totally styled us with good shots.
http://www.tommystequila.com/
http://www.540-club.com
McKenzie’s, 5320 Geary Blvd. at 17th Ave.

Round Two: North Beach
Oh, the choices are quite fabulous (as long as it isn’t Friday or Saturday night, when I don’t even come near this neighborhood), from Tony Nik’s to 15 Romolo to the new Comstock Saloon. And then there’s always Vesuvio or Gino & Carlo’s if it’s early in the morning and you happen to have the shakes.
http://www.tonyniks.com
http://15romolo.com/
http://comstocksaloon.com/
http://www.vesuvio.com/
Gino & Carlo’s, 548 Green St. at Grant Ave.

Round Three: Pacific Heights
My days of underage drinking at the Lion Pub are long gone (I was the queen of whiskey sours, ouch). It’s pretty slim pickings, but the cocktail list at Dosa is always full of surprises. And again, if I was still a smoker, I think Dimples (another winning name and sign, btw) would be a filthy Japantown den I’d occasionally be lurking in, but those days are done.
Lion Pub, 2062 Divisadero St. at California St.
http://dosasf.com/
1700 Post St. at Buchanan St.

The book is divided into bar (and restaurant) categories for activities like where to dump someone, where to 'eat and cheat', and places for 'ladies who lunch like dudes.' Hilarious, but incomplete if you don't name places:

Where there is a large selection of beer on tap and also you can bring your cat whose name is Roger:
Zeitgeist. But I’d sedate Roger and put him in a punk rock cat carrier fashioned out of a fixie.
http://www.zeitgeistsf.com

And if Roger is actually a spy cat?
Ahhh, oui. La Trappe—you and Rog can hide downstairs in the beer dungeon, as I call it.
http://latrappecafe.com/

From New Jersey?
Toronado. There’s enough dude ‘tude behind the bar, plenty of beers, and a few darker corners so Roger can still feel stealth.
http://www.toronado.com

Where you can dress up as a British naval admiral and nobody will question your legitimacy?
Oh, Vesuvio all the way. Emperor Norton is still a well-known name in those parts. And the last guy I had a conversation with there with like an extra out of Terry Gilliam’s Brazil.
http://www.vesuvio.com/

Where you can eat garnish as a meal?
The Bloody Mary bar at Elixir on Sundays could help sustain you. And Koko Cocktails has a bacon happy hour on first Fridays!
http://www.elixirsf.com
http://www.kokococktails.com/

Thanks Marcia, and best of luck with the book! 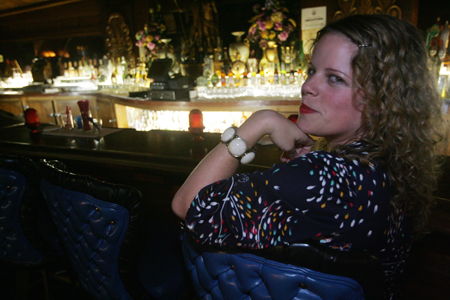 love her! thanks for the tips you two. :)

Super fun interview...you two should have a show.

That show would probably be amazing.

The Richmond Craptastic? I hope the rest of the city keeps thinking that. In the meantime we have some wine to taste at Blackwell's.

That show would be saucy, methinks--as in boozy.