Ice nerds got a real treat this Tuesday, for Andrew Bohrer from Seattle was guest bartending in San Francisco along with Amanda Womack from Cask.

He brought chainsaw Thursday to the city in order to chop up giant blocks of clear ice from an industrial ice maker into big cubes that could be further cut into ice balls.

Keep scrolling for videos of hand ice carving... or click here for an index of all of the ice experiments on Alcademics. 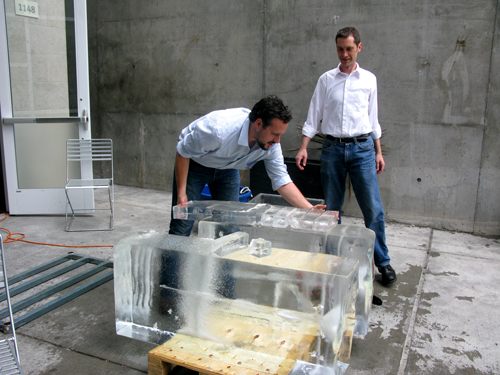 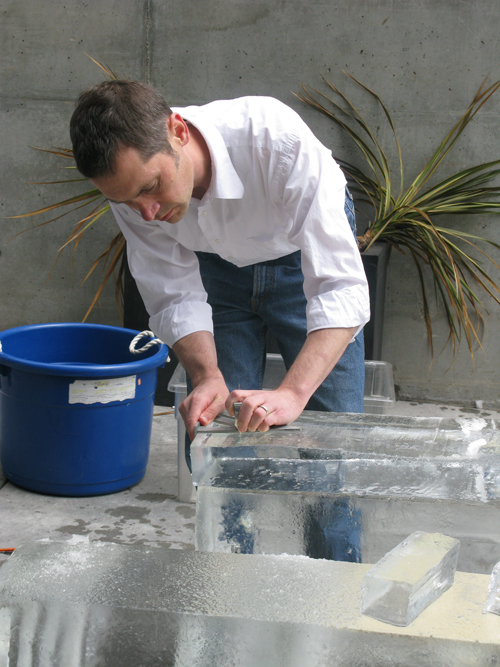 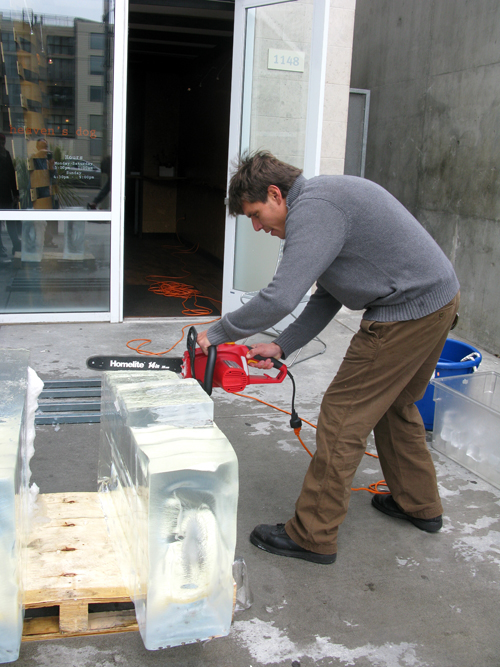 Note: there is some NSFW language in the videos along with chainsaw noise.

First they started with the giant block and shaved off slices.

Then they cut those slices into rectangles

Then they cut those rectangles into cubes.

Then Andrew Bohrer demonstrated cutting an ice cube into an ice sphere using the shaving method.

Then he showed how he makes shaved ice by shaving ice.

Then he showed how he takes a big chunk of ice and with a knife can reduce it down to cubes. I wish I had his skillz!

Then Amanda Womack shows how she cuts ice spheres- by tapping at the outside with a knife rather than shaving.

Wow, great videos. Did Andrew happen to give any specific info on the knives he uses? It looked like both he and Amanda were using Japanese knives, and I'm wondering how much details like steel hardness and edge angle matter to the various stages of ice prep.

Thanks Dave- Yes both the knives shown are Japanese knives. In one of the videos Andrew talks about why he uses them- because he can also cut citrus and other things with it and keep working without changing all the time. Amanda said that he used to use an ice pick to carve ice balls. They also used a third, smaller knife that looked like a big citrus knife that came with a colored cover (I don't know the names of knives.)

I hope Andrew's hands are clean ;)

It looks like Amanda is using a Shun Classic of some sort (you can get them at Sur La Table). The handle of Andrew's knife looks like a MAC Professional, though the angled tip is different from any of my MAC knives.

I admit to being totally amazed by the carving/shaving and the hand splitting of cubes. Ice doesn't do that in my hands! I was thinking maybe because that ice was warm, but he was actually complaining about it being warm!

BTW I'm going to get NSFW tattooed on my knuckles

The smaller knife is from the Shun Pro Line.

He told us what the larger knife was, another Japanese Manufacturer, but I forget. It was a very nice knife.

They were using Globals for the ice balls for the Spirited Awards at Tales:
http://www.flickr.com/photos/vidiot/4845507484/

and the pics around there. I really should go find the video and post it.

Yes please! I'd like to see as many ways as possible of doing it.

One for the knife fans:
Been doing very similar work here in the UK over the last year or so. We've had a lot of success with these knives:
Shun 7" Santoku Blade
NSF Miu 7" Santoku
Japanese single bevel edge, forge steel 3" ice blade
Silky Okata folding saws for larger blocks
A hammer and pitchfork ice pick for splitting huge lumps (after scoring the break lines with the saw)
Porsche Type 301 blade
Knives that haven't worked well:
Global brand knives
Sabatier knives
And for knives in funky colours there's a fantastic daily use selection of blades from Switzerland under the brand Kuhn Ricon (Colori II range).
Hope that helps!
(And this sort of ice work will certainly feature in my next set of cocktail videos!)

Thanks Merlin- and let us know when those videos are posted!

I love the idea of 'Chainsaw Thursday!

Camper, do you know how they are storing these cubes? I'd assume they aren't using them immediately which means refreezing them, is there a way they have found (that you could share) that keeps them from refreezing to each other and cracking when broken apart?

I have answers! One person says when they put them back in the freezer he just leaves space between cubes at first, then moves them closer together after they've been in there a bit. A second person says he does "Nothing special, just a little tap tap tappy with the ice pick to separate."

Two other people say to spray a little vodka on the cubes before storing them in the freezer and they'll not stick together. Which sounds like a cool experiment to try!

I know this is an old post by my question is related to the chainsaw. Chainsaws use oil to lube the bar, does it not get on the ice? I am aware that you are using a electric chainsaw not gas as well. Thoughts?

Yes electric chainsaw. Most bartenders say they don't use any oil in them. I've heard others use cooking oil but I think no oil is more common.

Thanks so much! Thats kinda strange because they chainsaw will get destroyed so fast without the oil. Hmmmmmm.....

The bartenders have said to buy inexpensive electric chainsaws and if they break just replace them. Not sure how often that happens.

Oh ok. Right on. Thanks a ton for the quick response.