The Bacardi Boat of Truth

The day after the Ministry of Rum festival, there was a rum event put on for bartenders that involved a boat ride sponsored by Bacardi followed by a debate from multiple rum producers in Oakland.

I learned a couple things about Bacardi rum on the boat before things got tense: 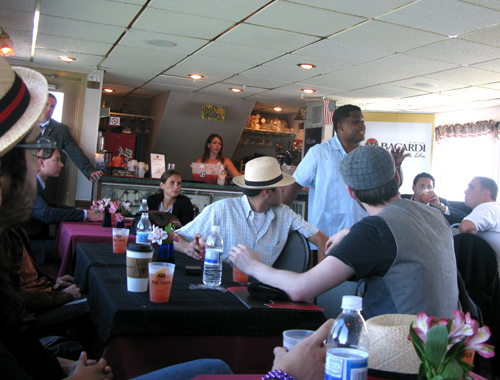 Then Things Got Interesting.

But the point of the cruise seemed to be to address the negative perception of Bacardi by top bartenders and rum connoisseurs. I am not so sure the cruise was successful at changing peoples' minds, but it was a step in the right direction.

"This is the most transparent Bacardi has ever been," said David Cid, Bacardi Brand Master Apprentice.

True enough, I learned that some of the rum is made in Mexico, that some used to be made on another Caribbean island,  and a few other pieces of information that might have been previously glossed over. Cid says the press kit in the most extensive in the brand's history as well.

But the discussion went south when once again they tried to assert that the product is exactly the same as it was when it was made in pre-Castro Cuba before moving to Puerto Rico, and thus if bartenders are making classic rum cocktails they should make them with Bacardi.

The bartenders pointed out that the still was once a four-column still and now it has five columns, that they buy molasses on the open market, and that the product is bottled with local water in different markets and at different proofs. Also, some of the bartenders have tasted vintage Cuban Bacardi and say it tastes different than it does today.

Cid said that the product is distilled differently for bottlings of different proofs- it's not just a matter of adding more water. He also  acknowledged that because distillation technology is better they would have to filter less now than they did previously to achieve the same flavor. He did a good job at explaining how Bacardi white could be the same as it used to. 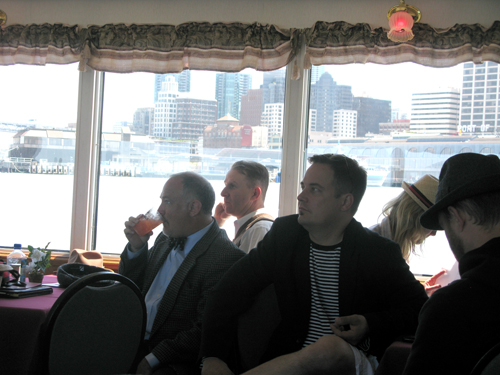 I think this could be mostly solved with a minor change of phrase. Perhaps Bacardi could state that it is an accurate recreation of the product as it was made in Cuba produced with today's more efficient, consistent, and environmentally-friendly technology. Then the bartenders could choose to believe it or not.

In any case, this boat trip was a case of another brand dipping their toes into the new model of transparent business practices. Patron tequila seems to be doing the same thing by bringing people to the new distillery and bringing around the master distiller for interviews.

It's a tough place to be for companies that have relied on secrecy (and many would say disinformation) in the past and have built up a lot of distrust in connoisseurs of their categories. It will be interesting to see if and how these companies can work to change their reputations and working relationships with bartenders.

Important business relationships happen on the front lines- between the sales, PR, and brand ambassadors and the bartenders and consumers. In the newer business environment fostered by the advance of social media these relationships are becoming even more significant, and now some business decisions result from front line interactions rather than meetings in corporate boardrooms.

So hopefully the higher-ups at Bacardi will listen to front-line conversations like this one on the boat and keep taking  steps toward increased transparency.

I dunno about all this, Camper. It'd be pretty easy to crack open one of the few bottles left of the old Bacardi and compare.

I think I recall reading something from the Beachbum that stated Cuban Bacardi was delicious and wonderful, because he had finally tried some(Wayne Curtis too). The modern Bacardi Superior tastes not far from vodka.

I often wonder where PR ends and "having a product selling itself" begins.

I guess this just goes to show how one can successfully sell to consumers and fly over the heads of industry professionals.

I've tasted pre-Castro Bacardi, and it's different than modern Bacardi; the old Bacardi was more flavourful and smoother. I just do not like Bacardi's rums, with the exception of their Bacardi 8, which is a decent rum.

Vodka. That's precisely what Bacardi reminds me of.

David Cid and his team members are setting new standards for ethical and positive promotion. Facundo Bacardi's goal was to create a consistently pure, clear and clean rum that would offer the essence of cane spirit but not overpower the flavors of cocktail ingredients. His research, his technology and his methods were demonstrably successful. To that end, the company continues to make rum within these parameters. The yeast, a key ingredient, has followed the process for 150 years.

Coca Cola goes to great lengths to guard their secret recipe, to be consistent over the decades and to deliver a known product. Having said that, Coke has changed since 1886 when Dr. John Stith Pemberton first concocted the beverage, including the Classic debacle, but the product still remains true to the original intention.

Arguing whether the rum is the same as a bottle tucked away since 1930 in Havana is purely an academic exercise. Having a chance to speak openly and candidly with David Cid about rum is a pleasure and a privilege.

Bacardi have been saying that the rum is the same for decades, and a simple tasting tells you that it isn't.

I think it's great that Bacardi are trying to improve their image and trying to address people's concerns, but they use different stills, different raw materials, and produce at a wholly different scale than they used to. Some things had to give. There's nothing wrong with admitting that. I don't think there's any brand that could produce rum of the same flavor and quality that Bacardi did in Cuba at the scale that Bacardi produces their rum today.