Making Clear Ice Without a Cooler

In a set of experiments, I showed that you can make clear ice by controling the direction of freezing. The container I've been using for this is an Igloo cooler. When using it, the ice freezes from the top-down and all the cloudiness in the ice forms at the bottom of the container rather than in the middle of the block.

I wanted to show that you can do this without a cooler as long as you have some sort of insultation that accomplishes the same thing as the cooler. In this case, I chose a bigger pool of water as an insulator.

As a control I froze a plastic take-out container of water in the freezer. 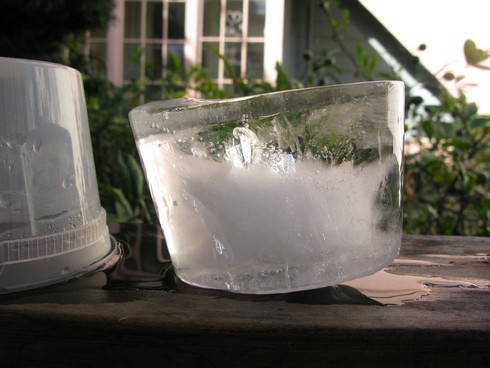 As usual, it is cloudy over a large area, mostly in the center. This is because the water freezes from the outside-in. The last part of the ice to freeze contains air and any impurities, and is cloudy. 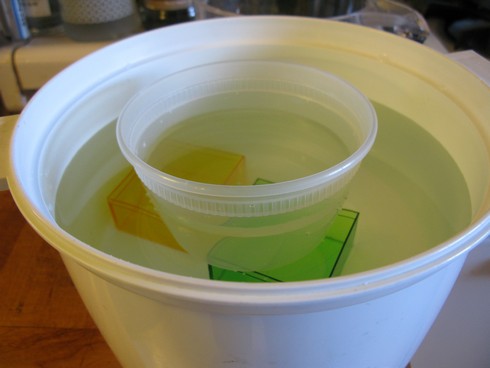 Both containers were filled with water to about the same level. The purpose of this is to use the outer container of water as an insulator. The water inside the smaller container would then freeze only from the top-down instead of outside-in, because the water surrounding it would freeze later (because it is so big). 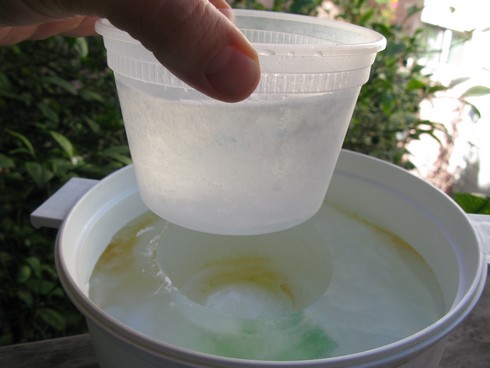 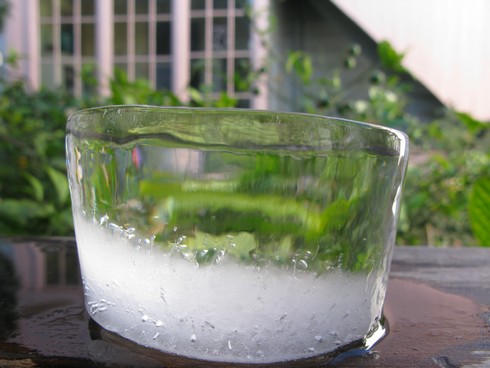 The results show that this worked- the cloudy part of the ice was the last part to freeze at the bottom of the container.

Holy crap, you have some free time! ;o)

What about the "starting" temperature of the water? I did not scientifically follow up on this, but once when I put warm water in the ice cube tray, I found the final ice cubes seemed more solid than the last batch of ice cubes I had made. I seem to recall them being clearer as well. Lots of uncontrolled factors, though.

Care to pursue? For science! I'm a slave to my automatic ice maker...

And for an insulator - what about just nesting an ice-cube tray inside another?

What if the bigger container was extremely large, so that the "center" of the whole structure wasn't even touching your insulated container? Would it then be completely clear inside your insulator?

Rick I'm not sure I understand your proposed set-up. However in this model with a small container inside a larger one the small container will always have cloudiness in it because it is trapped inside the vessel. We are just changing where the cloudiness appears rather than eliminating it. But it bears repeating that the last part of the ice to freeze is where the cloudiness happens, so you can always stop a freezing container before it finishes and have clear ice.

A very ingenious and "out of the box" style thinking to get around the cloudy ice issue. Why the need for clear ice though? It tastes the same whether it's cloudy or not.

Though clear ice is a little bit harder and melts slower, it's really an aesthetic choice.

What container can I use to freeze a rose?
I want it to stand as a centerpiece for my daughter's birthday.
Thanks!