Using Salt Walter as an Insulator to Make Clear Ice

This blog post is a continuation of this experiment.

In this experiment, I wanted to test out another way to insulate an ice cube tray to make clear ice. Inspired by a comment from another blog entry by a reader named Gael, I decided to try salt water as an insulator rather than just plain water as in the last experiment. If it worked, this would be a way to make clear ice at home without taking up too much freezer space.

I took a small food container and put it into a slightly larger one. The smaller container held only water. The outer container held water with table salt. The theory is that the salt water would not freeze, so it would act as an insulator for the ice, and control the direction of freezing so that it would only freeze from the top-down (as with the cooler method). 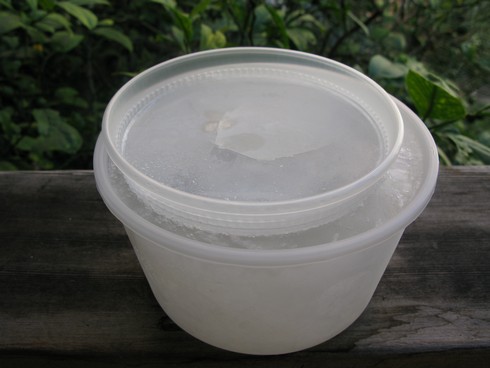 I didn't use a ton of salt. As you can see, the outer container's water did freeze lightly,though it was soft. The bottom did not completely freeze, as you can sort of see here. 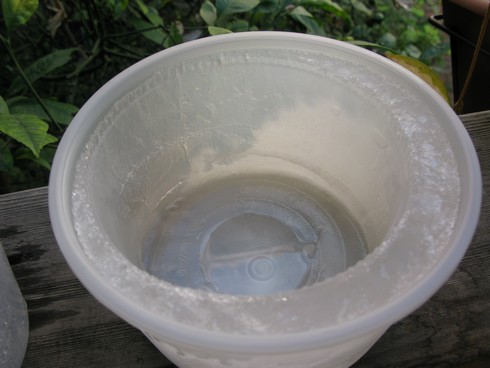 The inner container did seem to freeze toward the bottom. 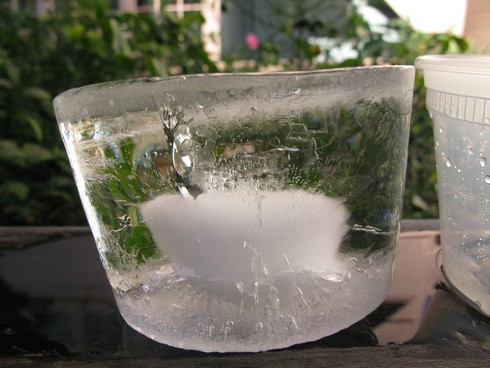 In this case the inner container sat directly on the bottom of the outer container, so it wasn't greatly insulated on the bottom. My theory is that this is why the cloudy part of the ice is raised above the bottom.

To improve this experiment, I would put raise the inner container off the bottom of the outer container, and probably use a greater amount of salt in the salt water.

As the outer container here is only slightly larger than the inner container, this system is more space-efficient than the Igloo cooler for many people without large freezers.

There's more work to do on this...

I've been following this for awhile -- really interesting stuff. At first, I was thinking that you should probably use an alcohol-water mixture instead of salt, because it won't freeze in a normal freezer, but now I'm thinking that whether or not the substance freezes doesn't really matter, what matters is the specific heat of the liquid you're using as an insulator (how much energy it can absorb without its temperature changing).

I looked around and surprisingly (at least to me), salt water seems to have a lower specific heat than water (http://www.engineeringtoolbox.com/specific-heat-fluids-d_151.html). I'm going to look for a food-safe compound that can increase the specific heat of water, but I think it will be tough to find, because the hydrogren bonds in water contribute largely to its specific heat.

What might be interesting is surrounding a container of very cold water (that's going to be ice) in very warm water, and placing that in the freezer.

Since the insulation is the important part, why not just look for insulated containers? A styrofoam soup bowl or a coffee thermos with the lid off both come to mind.

Seconding Noah, I think the property you're interested in is not necessarily whether a substance freezes, but rather its ability to conduct heat from the water to the environment of the freezer

Camper, have you thought of asking Dave Arnold over at cookingissues for ideas?

Yes, but then I realized I'd rather figure it out myself because it's more fun that way.

Okay, so here's the deal. Salt merely lowers the freezing temperature of water. The water in the outer container is still going to be 0C (32F). That's cold enough to make the unsalted water in the inside container freeze. Using a hot liquid jacket will just keep the water in the inner container warm, which will prevent it from freezing at all, so this also won't work. Folks are mentioning heat capacity, which is also a bit misguided. The specific heat of water is almost 4x that of styrofoam, but your igloo cooler works great! Let's examine that example:

Though water can hold more heat per gram, it is also a good conductor of heat. Styrofoam, however, totally sucks at transferring heat. That's why it's used in coolers and other insulating devices. This property is called thermal conductivity. The thermal conductivity of water is 20x greater than that of styrofoam, so that is why to cooler works! The heat moves 20 times faster through the water at the top of the container than through the styrofoam, so it freezes from the top down. Then you have ice on top. Ice, it turns out, conducts heat even faster than water! 4x faster. That's ~80x faster than the styrofoam. The insulated walls don't stand a sporting chance of freezing until the top layer says so. Honestly, other than a vacuum, there aren't many materials that have poorer thermal conductivity than styrofoam. There are urethane foams and other things that can be marginally more insulating, but not too much.

My suggestion would be to make a custom box insulated using a spray can of foam (there's a brand called Great Stuff that you could probably find at any hardware store). You could treat the bottom of an ice cube tray with it and maybe get clear cubes with a 1-minute modification!

I hope I didn't ruin the fun for you, but I just felt I had to spread truth where truth-spreading lay ripe.

Yikes. Pardon any awkward mistypings or leaps in logic. I am fresh out of a Sake and Sanjuro evening with my housemates and not exactly nimble.

Thank you Colin! I was thinking insulation properties and freezing points may not be related but you make it clear it is not. I should look up a table of thermal conductivity properties to find other materials that would be good besides styrofoam.

I was actually thinking of doing the very Great Stuff experiment you mention here- using it to insulate an ice cube tray. Now it's a sure thing.

Yes Adam- Buying a thermos is definitely on my list. Just need to find one that won't crack from ice pressure.

Nice to see that I've inspired an experiment. Although I'm sorry if I mislead you into thinking that salt water is a good insulator. If anything it's a good conductor. In fact many of the large blocks of clear ice are made with a brine at freezing temp and a metal container filled with water is submerged in there with a water pump agitating the water on top. This encourages ice to freeze from the bottom up. Ice is actually a better insulator which is why Eskimos use it for igloos.

I see- very interesting! So far my experiments have all been about how to do this without moving parts. I think for a mechanical device we almost need a freezer where the freezing plate is on the bottom instead of on top. (Not that I have any understanding of how freezers work.)

BTW, I'm in the middle of another salt water experiment. I added enough to where it's freezing extremely slow. It's about half way after 2 days. The interesting thing I noticed is that it's freezing in a collection of crystals instead of a solid block. While all the crystals are salt-free, this might not be the best way to get a large and uniform piece of clear ice.