The Martini Does Not Exist

Two versions of the cocktail may have completely different ingredients and be served in different formats: A bone-dry-and-dirty Grey Goose Martini on the rocks with extra olives has nothing in common with a Fifty-Fifty gin Martini with orange bitters and a twist. They're not even close to the same drink - in ingredients, in format, or in purpose. 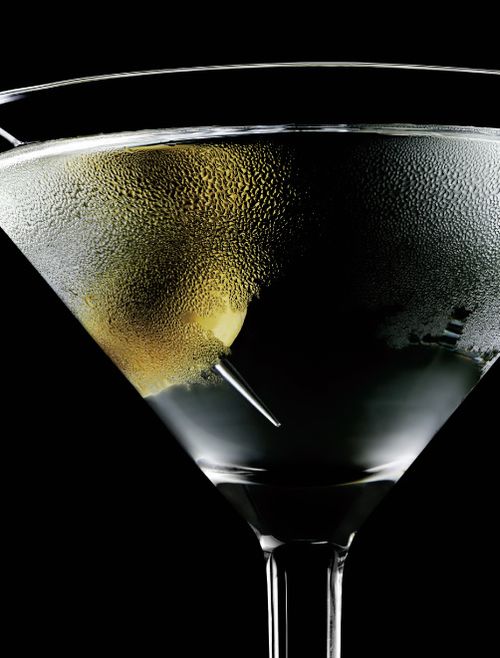 More than that, the Martini no longer exists even as a drink concept. It means different things to different people: strength, dryness, elegance, simplicity, an aperitif, glassware, crispness, an era in time, an intellectual challenge, etc.. Some of its concepts are mutually exclusive.

This conundrum surfaced when in New Zealand last year for the 42Below Vodka Cocktail World Cup, in which they had a Modern Martini challenge. The problem was that nobody agreed on what the Martini was, so everyone updated it in a different way.  Most of those ways differed from the judges' concept of the drink.

The Martini is as amorphous a concept as morality.

In this Sunday's Los Angeles Times Magazine, I wrote a story about how the Martini Does Not Exist, except in the mind of the individual.

I'm pretty happy with how it came out. After going through the issues involved with the concept of the drink (and revealing how that cocktail contest turned out), the story lists the Martini recipe as a moving target throughout the years.

Please give it a read.

When I order a fifty-Fifty Martini I usually have to tell the bartender how to make it!

Just like life it's all what you make it.

You might enjoy giving Lowell Edmunds' Martini retrospective Martini, Straight Up: The Classic American Cocktail a read. Everything from the symbolism of the drink to a literary analysis of its appearances. A cheap buy on Amazon.com used (a penny + shipping).

ME: I'd like a Martini with equal parts gin and dry vermouth and a twist.

BARTENDER: Wow. are you sure? You know, that's a lot of vermouth.

ME: Hey, can you put more vermouth in there?

BARTENDER: Huh? I already put a lot in. Most people don't like any.

ME: Yeah I know most people like a cold glass of vodka. But mine has gin in it and I like vermouth. Trust me, more is what I want.

BARTENDER: OK, whatever you say.

BARTENDER: You said you wanted it with olives, right?

Here is my typical bar conversation:

ME: Do you happen to know how long your vermouth has been open?

BARTENDER: Uh, probably a few weeks. Maybe months. No one drinks that stuff.

ME: Okay, I'll have a shot of El Tesoro and a Trumer. Thanks.

Camper, I love this article, I've shared it with most people I know. Very helpful for our ladies-only Martini Fridays, especially for those who've only ever experienced brightly colored 'martinis'. Thanks!

Wait a minute-- that's MY conversation with the bartender!

And that's my OTHER conversation with the bartender! I'm bookmarking this blog-- you are my people.

And now to read the rest of your output...

My first question to the bartender is "How long has that open bottle of dry vermouth been sitting back there at room temperature?" THEN I have to beg the bartender to actually pour a decent amount of vermouth into my drink! I didn't want chilled gin, I wanted a Martini!!!

I want to invent a freshness seal that gradually changes color after a bottle is opened so that you can see if the vermouth has been open more than a month.

I love all the interesting 'martinis' people are coming up with these days.

That why I order Gibsons... over and wet!