Some friends who meditate told me about the movie Into Great Silence, which follows the Carthusian monks of the Grande Chartreuse in the French Alps. As I barely stop talking you can bet they weren't telling me about its depiction of the silent lifestyle of the monks as something of interest, but because there is footage of them making the famous liqueur Chartreuse. 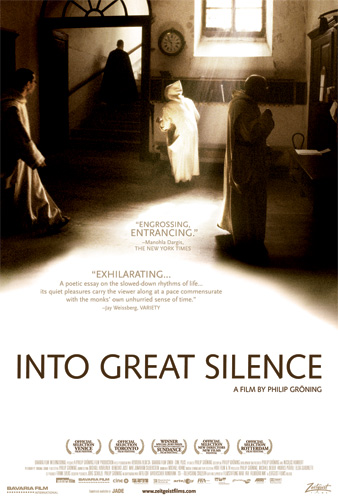 So I rented the movie and the bonus disc on Netflix. I fell asleep watching the main disc (twice!) and didn't see anything about the liqueur. But on the bonus disc, which you can rent separately and skip all the chanting, there is about ten minutes focusing on making Chartreuse.

In it, a monk goes about weighing dried herbs. You can see about four of them but I couldn't identify them. It was a combination of dried leaves, flowers, some seed stuff, and some roots. If I had the time I'd do screen caps and we'd play "guess the herb."

The monk then grinds them together and places them into a sack. He then hands them off to the distillery where other people distil them. I'm assuming much of the secret of Chartreuse comes from this combination of herbs, roots, bark, etc. that is delivered to the distillers already ground up so they can't guess what the components are.

The monk interviewed in the story says there are 130 plants used to make Chartreuse but, "There is no need to seek to know more," about the production, because they aren't telling.

However, the film then goes on to reveal more: The ground plants are infused in alcohol, water is added, then this is distilled. The distillate, which would be clear at that point, then undergoes seven or eight macerations with more plants that give it its characteristic color.

I believe they said it takes a month to make a batch of Chartreuse. No wonder the stuff is expensive.

The liquid is then sent to the cellar, where it ages first in large vats, then in smaller ones. The liquids are then reblended and sold.

I know of a few people who have visited the Chartreuse facility but apparently you don't get to see the monks; just the aging vats. I'm not sure what else, but I do still want to go in person one day. This film was a little peek behind the curtain to see what happens before it goes into the barrel.

Great film. I was film nerd before I was a cocktail nerd, and it was this film that made me the latter. When the film came out, I was completely intrigued by this alcoholic thing that I had never heard about, so I bought a bottle. It was one of the more unique things I had tasted, and the first thing I made with it, a Last Word, was amazing. Thus my love of all things cocktail was born, so its funny to see that film show up here.

I actually spent a month last summer in the city where Chartreuse is distilled now. You can tour the distillery of course, but driving by the old distillery in the mountains is very interesting -- it was destroyed by a rock slide, but much of the building remains. A little ghost-town like!

I took the tour as well, and did see a couple of the monks, as well as wandered around in the cellars and ended with a tasting. Very cool. Voiron is the city to visit, for many reasons, this included.

I was just talking to some people last night, explaining to them about how Chartreuse is made. Now I will have to send them this link!

I found a medallion with the Chartreuse emblem and namepressed on the front in the name chartreuseon the back with seven stars andthe date 1605 in around the bottom is in very tiny print. the name A. AUGIS. to whom I believe is one of the seven original monks off Chartreuse.
just trying to see if this medallion is real or some kind of trinket

I'd guess a trinket but that doesn't mean it's not a valuable one. Worth checking around!

.thank you for that reply. I'm not giving up on it yet I have had the medallion for 20 years. I found it in a sub basement that no one had used it in over 20 years it was under some 60 year old steam pumps.

Very cool. I don't really have any good brand contacts with Chartreuse who could help with it, but if you find anything interesting I'd love to hear about it.

I took a tour of the distillery in May of 2013. There are two entrances to the main building, one which goes into a small museum and from which the tours start, and one for the gift shop. The museum, shop and tasting room are all connected. It seems that most of the people who work there do speak English, quite well in some cases, but the tour was only in French. I would guess that if you have a large group of English speakers, you could reserve a tour in English.

For the tour, we first viewed the distillery (not very big, three or four stills in a room maybe 80'x50') that has the most fantastic aroma to it, not quite like Chartreuse, but very aromatic. Then we saw a 15-20 minute movie of the history in 3D!, which was followed by allowing us to wander around, basically unsupervised, in the underground cave they age the liqueur in for about 30 mins. The cave also has some dusty plaques and mock setups in various parts of the cave that tell/show the history a bit more, both in English and French. Lastly we went back up to the museum tasting room, and they let us choose a tasting of one of the various liqueurs they currently produce (Green, yellow, VEP's, MOF, 1605, 9th century, genepi and fruit liqueurs). The tour and tasting is all free and takes about an hour total to do.

The store makes you wish there was no limits on check luggage on the flight back. Everything they make, which is quite a bit more than what is currently imported to the US commercially, is available for very reasonable prices. We didn't take very many pictures, but I found this link below to someone who did and posted them to flickr.

All in all, a great place to visit.

Thanks Jason - Hopefully I'll get to visit one day.

Maybe a french herbalist can tell us what the herb jars say in the museum pix!? I tried but no such luck in google translate and most of them are not clear.

Thanks Jason for the link

A friend of mine is a priest at the Grande Chartreuse and has told me that only two of the monks know the secret of this liqueur and are sworn to secrecy. He also mentioned that some of the herbs are gathered by these monks on the very property of the Grande Chartreuse.