Continued from yesterday's post, here are more bars I visited on my recent trip to Dublin with Jameson Irish Whiskey.

The Doheny & Nesbitt is a traditional pub dating back to 1867. When I was coming in from the airport, my driver told me that there was a recent change in government in Ireland, and that would be the spot to go if you wanted to see politicians crying into their beers. Sounded good to me! We visited a couple of days after that and did not see any crying politicians; mostly people on dates, but the bar was nice.

Next we went to O'Donoghue's, a pub with traditional Irish musicians playing. I suppose if you like that sort of thing it would be good.

We also went to Cafe En Sein, locally known as "Cafe Insane." The website does a pretty good job of describing it:

A series of bars spanning 3 floors, the soaring interior of Café en Seine is amazing with a 3-storey atrium culminating in beautiful glass-panelled ceilings, 40 foot trees, enormous art nouveau glass lanterns, and statues among its many amazing features.

It's a massive space crammed with statues, Tiffany-esque lamps, and lots of iron work and tile. I should probably think it's tacky but I loved it. While we were there dance music was playing so it's probably clubby when it's crowded.

We also stopped by the Horseshoe Bar in the Shelbourne Hotel. In one of the fanciest hotels in town is the famous Horseshoe Bar. We thought that we were in it, but looking at pictures online I think we were actually in the main restuarant/lounge- maybe I should have guessed because the bar wasn't shaped like a horseshoe. It was closing time so we didn't have time for more than a beer anyway. Next time...

We had dinner at the Michelin-starred Chapter One restaurant. The cocktail menu isn't online but to my recollection it was a short list of classics. Nice bar area though.

Another night I met Paul Lambert at the Mercantile Hotel Bar. I seem to recall a cocktail menu but I had a beer as I was hungry. The menu isn't online. Anyway, the bar area is two or three floors of an old wooden hotel lobby, with live performances somewhere inside. I loved the look of the place and would like the see the rooms on day.

Next we stopped into Peadar Kearney's, a traditional pub where there was a sports match on the television that everyone was watching so we were mostly quiet.

After that, we visited Shebeen Chic, a pub named after ilegal country bars people would have in their sheds. The place had a look of a quirky coffee house with mismatched tables and chairs and lots of stuff on the walls. It was too early in the day to get a feel for the vibe of the place at night. 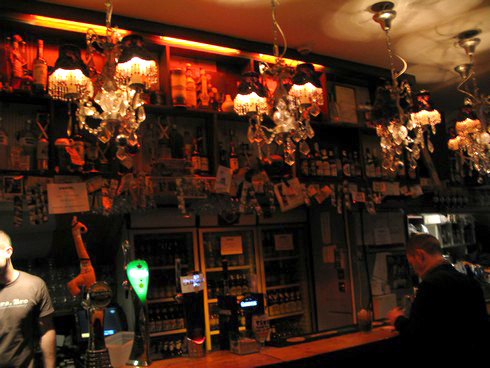 Moving on we hit up Exchequer, a hip restaurant with high-end pub fare. The drink menu had some more tempting flavor combinations to me - clove/lime syrup, rhubarb bitters, and black tea liqueur. I had drink with rum, lime, clove syrup, bitters, and amaretto. 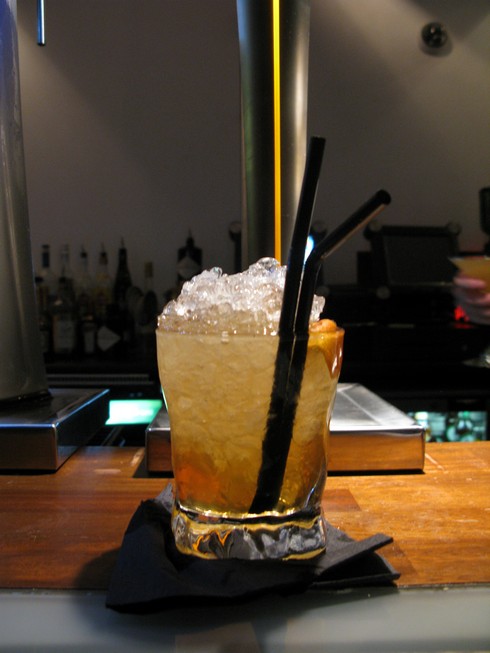 After this, we stopped into a pub called International Bar for a quick bite to eat. It was unremarkable except for the very nice bartender who managed to feed a vegetarian despite having to make the sandwich himself.

Then it was on to Long Hall, a gorgeous old but fancy bar with red carpet, dark woods, and antiques about. I really liked the place and that it was mostly full with older people on Saturday night. Many of the bars were, actually. That's one of the things I liked best about Dublin - there's not an age limit to drinking in bars.

And finally, my last stop on my trip was one of my favorites: The Bar with No Name. In this big wooden hotel building that seems like it takes up a block, there is a large downstairs bar, but that's not where the party's at. You walk down the street and enter at the sign of the snail. (Some people call this place the Snail Bar. The bartenders call it Raf's Bar for Rafael the bartender.)

Upstairs, it's like a Victorian apartment where you planned a party so you pushed most the furniture up against the walls. It looked like a hipster party in there, with people hanging out lazily on the couches next to each other or standing and talking. Except for the two bars, it could have been someone's house party. The cocktail menu, which is not online as far as I can tell, was full of simple, classic, appealing cocktails- I seem to recall a Southside, for example. Raf said he's trying to help train the local palate to be more adventurous.

We didn't hang out in the main rooms, but walked through the hotel hallway to another smaller and quieter bar supposedly for hotel guests where we ran into more bartenders. There we had a Fish House Punch made by Aaron wall, poured from a tea pot into teacups.

In my next post, I'll try to sum up some of this into a shorter post of my favorites.