Drinking in Dublin, Part I

A couple weeks ago I was in Dublin, Ireland with Jameson Irish Whiskey. While there I made sure to check out all the pubs and cocktail bars I could, because that's what I do. My hosts were Aaron Wall on one night and Paul Lambert on another- thanks guys!

I was staying at the Fitzwilliam Hotel, so that's where we began, and several other nights in Dublin that's where I ended up. Most of the pubs close early- midnightish- and even the places with late-night licenses were closed during the week, but the hotel will serve you all night long, it turns out. Me like.

From there we went to Harry's Bar, aka Harry's on the Green, across from the Gaiety Theatre. It is basically a high-volume version of an American bar that you'd find in hotels around the world. I was there when there were only about six other people in the bar, but you could tell with two separate bars and the way the space was set up it was built to hold a lot of people. 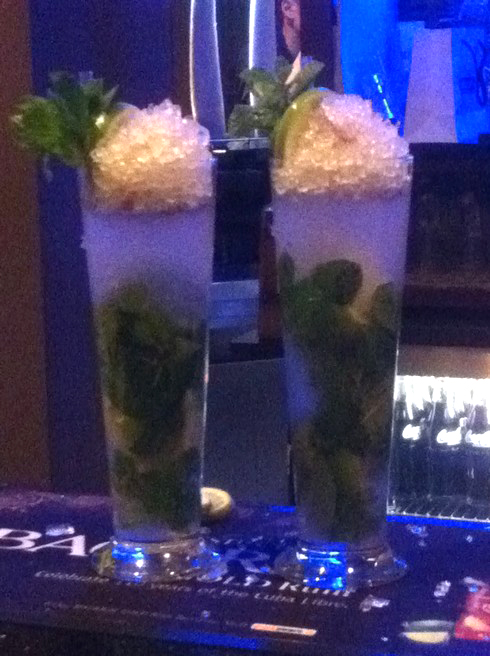 It was at Harry's I saw the bartender create the Fussiest Mojito in the World: In a super-tall Collins glass, he added about four lime slices and muddled them with sugar as you would make a Cairpirinha. Then he added a fistful of mint and pressed it with his bar spoon. Then he added ice and alternated pouring in rum and soda water while stirring. Then he packed it overflowing with more crushed ice, and garnished it with a lime wedge, a sprig of mint, and a float of dark rum on top.

Later I was told that people expect Mojitos to be made this way in Dublin, with limes muddled into the bottom of the glass, so even when making them with lime juice some bartenders will throw in a lime wedge in the bottom as a decoy.

From there we hit up SABA, a Thai and Vietnamese restaurant with a progressive bar program initially designed by Paul Lambert. There I had the Say Say cocktail, made with muddled cherry tomatoes, St. Germain, pomegranate syrup, and lemon.  St. Germain and tomatoes work well together - who knew?

The bartender there was also experimenting with some molecular mixology techniques. He let us try spheres of cucumber puree mixed with sweet chilies that were delicious.

From there, we hit up a couple of traditional pubs. First (and third, we came back later) was Bruxelles, a locally-infamous international saloon with a statue of the guitarist from Thin Lizzy out front. On the top floor it has elements of a sports bar with flags of many countries and funny but take-no-B.S. bartenders. There are two more attached bars: the rock and roll Flander's Bar in the basement, and Zodiac Bar, the former women's bar that opened when bars integrated (in the 1960's!). 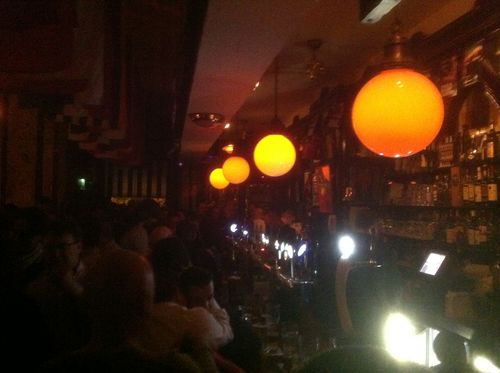 I came back to Bruxelles another night, Friday I think, and it was packed and ridiculous. People were singing along to a mix of 1990's music, drinking heavily (mostly Heineken, boo) and having a raucous time.

We also stopped into John Kehoe's, a very old and traditional pub. In the front of the room it has a "snug," a little section separated from the main bar with a window to the end of the bar for service. This was also from before bars were integrated between men and women- the women's entrance.

Down the length of the bar were wooden dividers every 10 feet or so. (You can see one in the picture below with the hazy glass in it.) I really liked this design element: it makes you feel like your little space is more intimate even when standing at the bar. 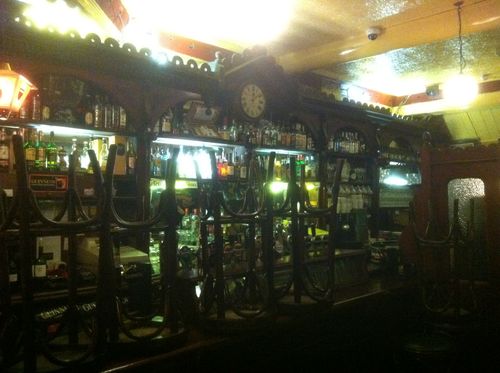