Locanda is a restaurant in San Francisco opening around April 19th according to current plans, from the folks behind Delfina.

Bar Manager Brian MacGregor, formerly of Jardiniere, has been working on the cocktail menu and took some of it out for a test run on Sunday at The Hideout at Dalva.

He says he's not sure if he'll put the Saratoga on the menu, since it was on for a long time at Jardiniere. I love that drink especially with Yamazaki whisky.

The Corriandolo Correcto was pleasingly rich and bitter. They ran out of the Empress Bianca before I could try it.

I was present at the creation of the "Stir Key." I was in New York at Lani Kai and we were sitting in front of bartender Ivy Mix. Brian asked her for something "Stirred and Murky" and this is what she came up with. (He didn't want to call it the "Sturkey" -my suggestion- as he didn't want people to assume it was some heinous turkey fat-washed drink.) 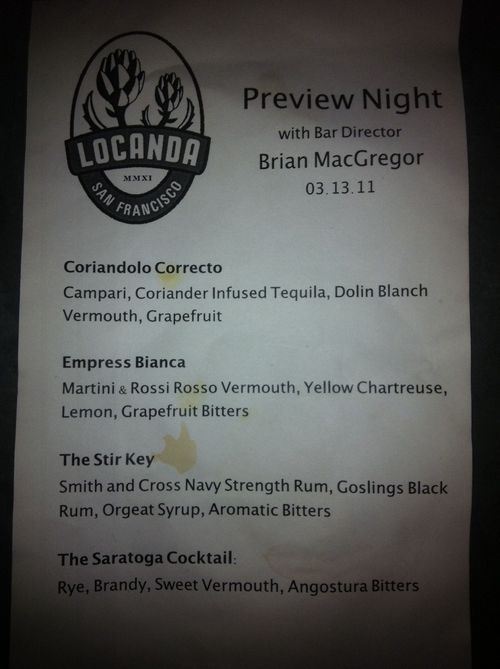 I am pumped about Locanda as well. If their showing at the Ferry Building's Cocktail Night is any indication of things to come, we are all in for a treat.

I love the combination of Grapefruit and Compari and am looking forward to trying The Corriandolo Correcto. See you on the 27th!