The History and Production of Angostura Bitters

In March I visited the Angostura distillery in Port of Spain, Trinidad. They make not only Angostura Bitters here but also the line of Angostura rums and rums for several other brands. In this post, I'll focus on the bitters. 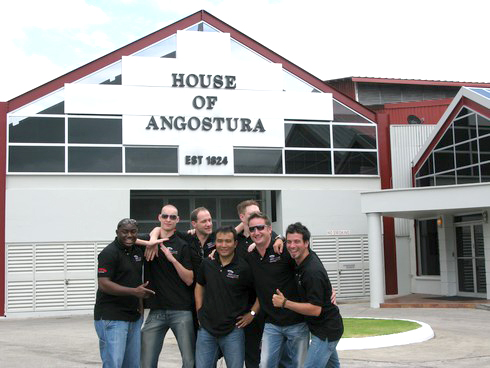 The History of Angostura Bitters

Angostura Bitters were created in 1824 by Dr. Johann Siegert. They were originally called "Dr. Siegert's Aromatic Bitters" and later renamed Angostura Bitters. (The folks from The Bitter Truth Bitters have some interesting information about a lawsuit over the name "Angostura" between these bitters and Abbott's Bitters.) 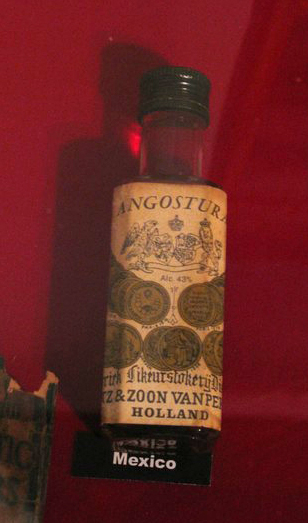 (One of the other Angostura Bitters bottles from around the world on display at the museum.)

The bitters were created for tropical stomach ailments in Venezuela, as Dr. Siegert was the Surgeon General of Simon Bolivar's army.  In fact the town of Angostura is now called Ciudad Bolivar. The bitters were first exported to England in 1830. 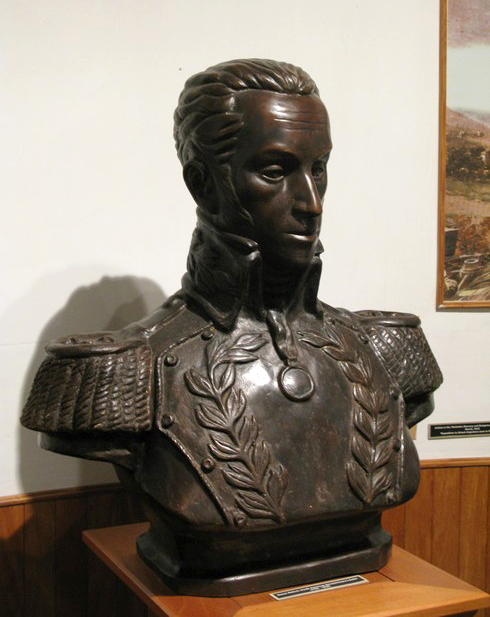 According to this good history on Angostura's website, Siegert's son exhibited the bitters in England in 1862 where they were mixed with gin. Thus the Pink Gin was born. 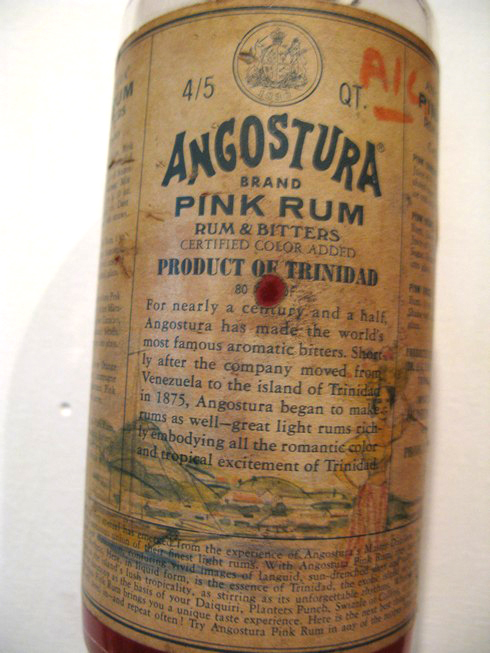 After Dr. Siegert died in 1870, his sons relocated the business from the politically unstable Venezuela to Trinidad in 1875. The company was renamed Angostura Bitters in 1904. Sometime shortly after this,  the son in charge of Angostura lost all of his money in bad business deals and Angostura was taken by his creditors.

Why is the Angostura Bitters Label Too Big for the Bottle?

For a competition of some sort, one brother designed the bottle and another brother designed the label. By the time they figured out they should have consulted each other on the size of each, it was too late to change. On the advice of a judge in the contest, they kept it as their signature. Here, our tour guide does a better job of explaining it in this 1-minute video.

How Are Angostura Bitters Produced?

The secret ingredients for the bitters are shipped from wherever they come from to England. There the ingredients are put into coded bags and shipped to Trinidad. I believe they said they have a long-standing arrangement with customs that the bags are not inspected when they arrive in Trinidad to maintain their secret.

At the distillery, there are five people known as "manufacturers" who prepare the ingredients. They weigh out the relative quantities of each in a room known as the Sanctuary. The ingredients are then dropped into a crusher that crushes them all together as they fall into the room below - the Bitters Room.

At the base of the crusher are carts that hold the ingredients. We weren't allowed to take pictures in the room due to the high-proof alcohol vapors (but later did of the bartenders there), but we did get to peak into the crushed herbs. I remember seeing largish chunks of something that looked like gum arabic, and a lot of rice-sized grey grains about the size of lavender seeds, though I doubt they were because there was a lot of them. (There you go: gum arabic and lavender- make your own Angostura at home :) )

The crushed herbs then go into a "percolator" tank with 97% alcohol to extract their flavor.  After this infusion is done, the liquid is then transferred to another tank where brown sugar and caramel color are added. Then the liquid is transferred again and distilled water is added to bring them down to the 44.7% alcohol level for bottling.

This is all done in a relatively small room with a bunch of tanks in it. It's impressive that the world's supply of Angostura Bitters is made here. 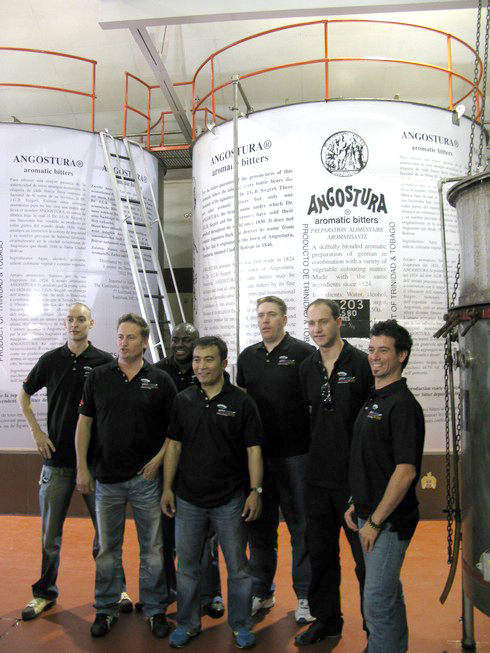 Later that day, they did publicity shots with the bartenders in the Bitters Room. They let the professional photographers take photos and let me take them without flash. As you can see the bitters tanks have the bottle labels on them. Except in this case, they actually fit.

Great writeup, it's amazing how well their product still holds up as best in class with all these newcomers in the market.

There are a few things that are guarented in life...taxes, the sun always rises in the morning and last but not least, no bar should never be without a couple of bottles of Angostura bitters!!!

Found this post when researching on the history of the oversized Angostura bitters label. Interesting tidbit :D !

There is nothing like Angostura bitters. Despite the gentian root's incredible bitterness, they must not use that much of it relative to the brown sugar and such, because as far as bitters go, it's not the bitterest bitters on the planet, and is actually quite sweet. That being said, it has a lot of flavor, and it's a unique flavor that I've never detected anywhere else except in an aftershave that I received as a gift many years ago from Dominica. Well, I didn't drink the aftershave, but it had the same unique aroma. It's the flavor I wonder about. There's something delicious about it. A manhattan or old fashioned without Angostura is just not right.

I have a lot of problems with my stomach. I'm terribly nauseous at least once a day, but most often at least half the day. I have a prescription for the anti-nausea medication called Phenergan, but I find that a teaspoon of Bitters in a glass of iced soda water helps more than any medicine I could take. I love it!!!

My daughter uses an organic green tea that helps her stomach. There are also other benefits to be obtained. If you want to try it, you can get it at aurawhittier.myorganogold.com
Enjoy

I agree. This is a great drink. A slice of lemon would give a final touch. I also add a few drops of Angostura to my grapefruit halves (with a bit of sugar and a cherry of course). This is my favourite desert.

Are there any artificial colours in Angostura Bitters? The label indicates "added colours".

I don't know the answer to this directly. My guess would be that it's just caramel coloring like in most scotch whisky, cognac, etc. to make it darker brown.

Hi Richard. I messaged the company directly inquiring the same question. (I'm allergic to artificial colors). This was the response I received:

"Our bitters does not have any artificial colours at all. The colours are from the caramel and botanicals/gentian (natural).

Sadly being an alcoholic I cannot drink it . . . used to love it in a lemon lime & bitters.

used it for years for handovers works excellent !!!

I raised guinea pigs as a child. Whenever one of our little pigs would get pouty and listless the vet's first go-to was something she called "milk sop." This was a small piece of bread dipped in milk with a drop of Angostura bitters on it. Even the pigs that hadn't eaten in days would sniff at the sop with interest, gingerly nibble at it, and then devour it with relish, and within hours they would completely recover to their perky little selves. What an amazing cure-all!

That is fascinating! Thank you for sharing.

I heard that two branches of the original family possess half the recipe and ingredients each.
One Branch does not know the contents of the recipe of the other half. Understand that both branches meet periodically , combine their recipes and manufacture a large batch of Angostura Bitters. The two recipes are totally secret .
Is this true ?
Ravikrishnan, India.

Hi - That was not the story they told us on this visit- and if it were remotely true I'm sure they would have shared that version!
I have heard a version of that story for other brands, "only 2 people each know half of the recipe." At this point I'm thinking those are a bit too romantic to be true.

I have a bottle of. Angostura royal oak fine rum with the number 12 on the label. It is a 1 liter bottle that has a #53757. What can you tell me about it, including price.

I think Angostura bitters would make an excellent base for an after-shave lotion. But the bitters contain substantial amounts of sugar, right? Is there a sourcefor the bitters without sugar?

I think the larger problem would be the caramel coloring - Angostura and other bitters will stain clothing and skin - one bar even used it on purpose to stain their furniture. It's rare to find a colorless bitters with the same flavor profile, but Ango has a bitter gentian backing and then "baking spice" notes (cinnamon, clove, etc) top notes. So you could look for (skin-safe) versions of those essential oils and build your own if you're so inclined.