The Scoop on 441 Jones in San Francisco

The former Club 441 is half a block from Bourbon & Branch, and is now owned by some of the B&B team. I checked it out the other day and got a tour from Justin Lew, Creative Director of the company. The bar is (temporarily?) named Mr. Lew's Win-Win House and Grand Sazerac Emporium after his Sazerac-themed 30th birthday party that was held there.

The space is pretty bare bones. After Lew removed the interior neon signage, there are a lot of bare walls. There's a pool table and some bar stools. That's about it... for now.

But remember how Bourbon & Branch began as just a two-room space and is now 4 rooms plus the basement, and how Rickhouse is about twice the size (and rumor has it, expanding) as Ginger's Trois that was there before it? They plan well: 441 has a large upstairs area that will probably end up becoming a balcony, as well as an entire large empty room beside it. When they decide what they want to do with it, they'll have plenty of space. (I just noticed that Cienfuegos in NYC is doing this as well- opening their third bar in the space.)

For now, it's being run as a dive bar with a small menu of classic cocktails and canned/bottled beers. You'll find John Ottman (of Rickhouse and Elixir) there most of the time, and bartenders including Jill Webster and various members of the Rickhouse/Bourbon & Branch crew. 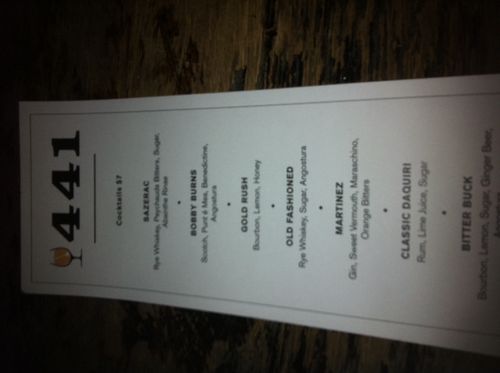