Yesterday in London I hit three spots. We had an afternoon lunch at the Paramount Club which is on I think the 32nd floor of a building with 360 degree views like this one. I don't know what it's like at night but I liked being there during the day. 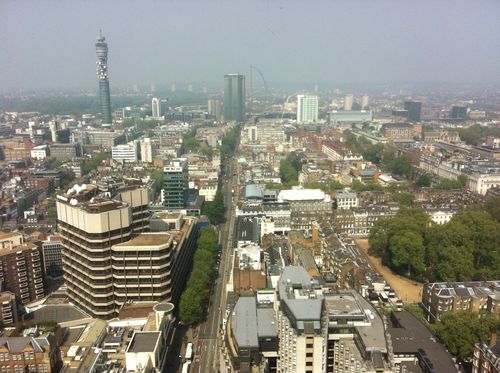 Later that night, we had dinner at Cottons, rum ambassador Ian Burrell's restaurant. The place oozes comfort and good vibes, with a soul singer near the front door, several rooms for dining, and of course a huge rum selection. Funnily enough I ordered a dish that came with roti, the same food I had the last time I saw Ian in Trinidad.

Then we hit up Callooh Callay, a cocktail bar with a neighborhood feel in Shoreditch. We had a bunch of daiquiris and a couple of bowls of punch in super hipster punchbowls. The bowl sits on a platter covered with astroturf and guarded by three gnomes in Kanye sunglasses. That's all I have to say for today. It's going to be a long one. Wish me luck.

I can't tell if those punch bowls are kinda neat or kinda cheesy. Guess it depends on what the rest of the decor looks like and how the drink tastes.

The drink wasn't perfect but the bowls were great for the atmosphere.