Here are the details on the Absolut SF flavors and campaign, from my story (no longer embargoed) in the SF Chroncle. It explains the seemingly random flavor choice and plans to work with artists and DJs for the launch. The story is here. 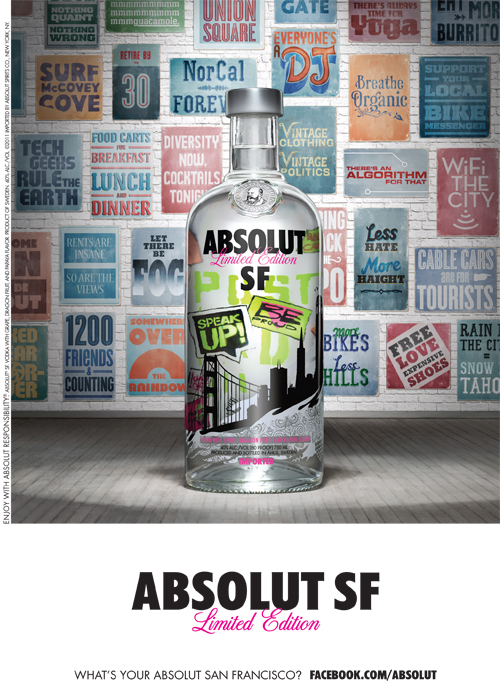 Every year since 2007, Absolut has released a limited-edition flavored vodka inspired by an American city. After New Orleans, Los Angeles, Boston, and Brooklyn - and much speculation on Facebook and Twitter - the brand will introduce Absolut SF on Wednesday.

The bottle, designed with a "freedom of expression" theme, features a cityscape on the front label and cartoon protest signs visible through the bottle with slogans like "Speak up!" and "Be Proud." The accompanying print advertising campaign offers additional cheeky slogans like "Free Love, Expensive Shoes" and "Diversity Now, Cocktails Tonight."

The flavors - grape, dragon fruit and papaya - were selected to represent the city by paying tribute to the Wine Country, and Asian and Latin cultures. Cocktails promoted with the flavor include the Absolut SF Foghorn (with the vodka plus grapefruit juice) and the Absolut SF Wild Parrot (with lychee liqueur, lime, cranberry juice and soda).

Typically, slight variations on the flavors of the Absolut city editions have become the next flavors in the permanent line. Absolut Brooklyn's red apple and ginger flavor preceded Absolut Orient Apple in green, red and yellow apple with ginger, for example. There will be about 150,000 bottles distributed, with a suggested retail price of $20.

Local artists are also involved in the campaign. Erik Otto's artwork will be featured on the brand's Facebook page, along with a downloadable early release of a single by DJ Miguel Migs from his album, "Outside the Skyline," due out this fall. Migs will also spin at the grand launch party June 16, for which San Francisco fashion designer and "Project Runway" alumnus Christopher Collins will be designing the staff T-shirts. Absolut has also pledged to donate $50,000 to Habitat for Humanity Greater San Francisco,.

"Like its preceding cities, San Francisco is a key location for our consumers - whether they live there or aspire to visit. Known for its food, its drink and its culture - San Francisco's characteristics are all characteristics that are perfectly aligned with Absolut's DNA," she said.

Also, Absolut is sponsoring the Tales of the City musical playing at the A.C.T. I'm going to the gala premier event on Wednesday and will have my first taste of the new flavor there. Woot!

We're psyched about the new Absolut too, can't wait to see what new cocktails SF will bring!