I was recently in London again, for two nights: one on either side of a trip to Tuscany with Bombaby Sapphire. In those two days I managed to visit the American Bar at the Savoy Hotel twice, Nightjar, and the brand new Worship Street Whistling Shop.

Yes, I was at the American Bar at the Savoy Hotel just one week before this visit. But that was during the daytime so it doesn't count or something. On my first night there, I stopped in for a drink at the Savoy's other bar, the Beaufort Bar [menu (PDF)]. There, there is a heavy emphasis on champagne and champagne cocktails.

Then I hit the American Bar [menu (PDF)] for a Mezcal Daiquiri, a Negroni, and on the way back a Barrel-Aged Hanky Panky. The latter was the best barrel aged drink I've had so far. Erik Lorincz makes it with four different gins and four bittering agents. The Worship Street Whistling Shop [menu (PDF)], which is both hard to say and to type, is an underground space that was formerly a wine bar. The space has lots of nice leather seating for groups, plus a couple of nooks that are being developed into theme areas. One of them holds a bathtub and the idea is to make it a little room dedicated to gin. Another room may eventually become a ship-themed space dedicated to rum. (The place had only been open a couple weeks so not everything is finished.)

Another small nook holds the laboratory, with two stills and other equipment used to make ingredients in the drinks. Those ingredients include "high pressure hydrosol", "exhaustion tonic", "chlorophyll bitters", and "walnut ketchup".

Naturally, I chose a vinegar drink, made with whisky, honey and lavender shrub, lemon, and sage dust. Delicious.

[Confidential to WSWS: Your menu lists some homemade items as WS2. If I remember correctly, WS2 = WSS. I think you want (WS)2, which equals WSWS.]

Ever since I saw (and posted) their menu, I have dreamed about visiting Nightjar. And it turns out it's just a couple of blocks from (WS)2. Barcrawl!

The place was dark and more densely fit with furniture than the last bar. And the drinks were way more elaborate. Each one came with a tiny bite of food of some sort or another, and most seemed to be fancily, fussily garnished. 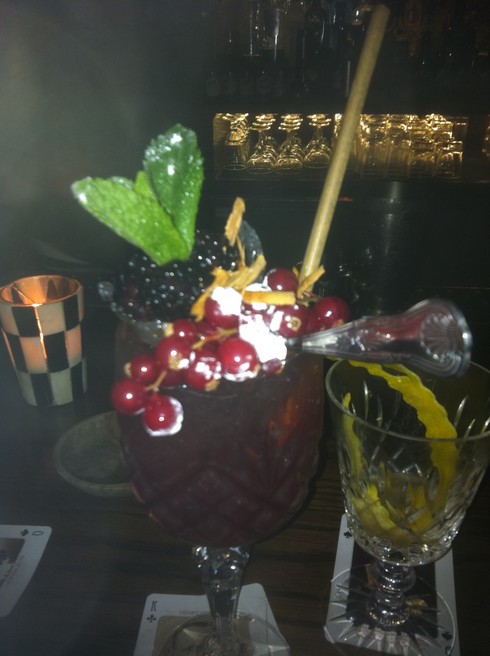 I had a couple drinks there, as you can see above. The one I hadn't started yet was garnished with mint, two kinds of berries, sugar, a spoon, and a golden straw. Unwieldy, but cool. It also came with a side of some sort of cocktail jelly.

The other drink I can't remember (it was approaching four in the morning) but both were great.

Once again, a great trip to London bars. Thanks to Erik, Ladislav, Nathan, Esther, Rich, Matthew, and all the other bartenders who took care of me.