Now that we know one way to make crystal clear ice, what are we gonna do with it?

One thing I've wanted to attempt is to make ice balls. These can be carved by hand, but that's a lot of work. The big copper ice ball makers make lovely ice balls, but these cost a ton of money. I've been trying to think of a new solution.

When they send bars the copper ice ball makers, they send an ice cube tray that makes a big enough cube to use in it. Unfortunately that tray produces cubes that are cloudy in the center, for reasons described earlier on this site.

I am a big enough nerd that I have brought my own clear ice to a bar that had the ice ball maker to produce a clear ball. It was lovely. 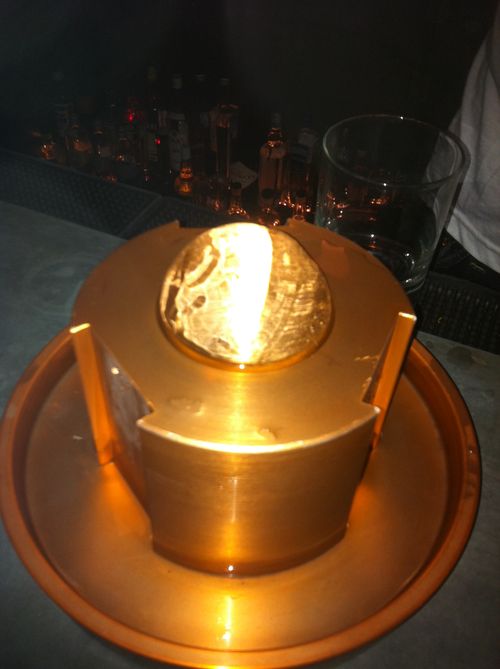 So I made a first attempt at another way of creating ice balls with conventional equipment: The Stovetop Ice Ball Method.

Don't get too excited: So far it doesn't work.

The theory is that I'll start with a clear block of ice and melt it into a heated metal bowl, creating a half-sphere. Then I'll turn it over and make another half sphere joining that one to form a complete sphere.

I bought a bowl at Ikea that's probably four inches in diameter - too big for a glass but fine for an experiment. I sat the block of ice on it, and set the bowl on the stove burner. 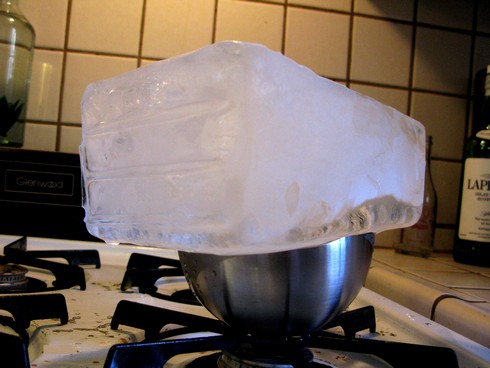 Click the link below (if you see one) to keep reading.

I turned on the burner to heat the bowl so that the ice melted into it. 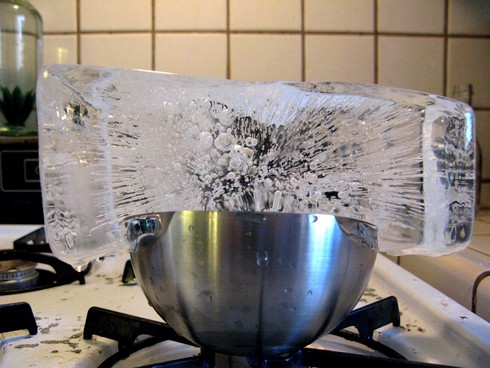 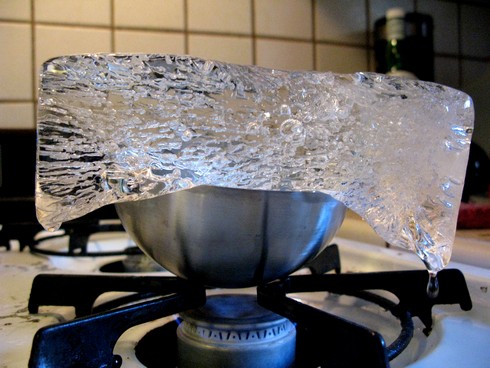 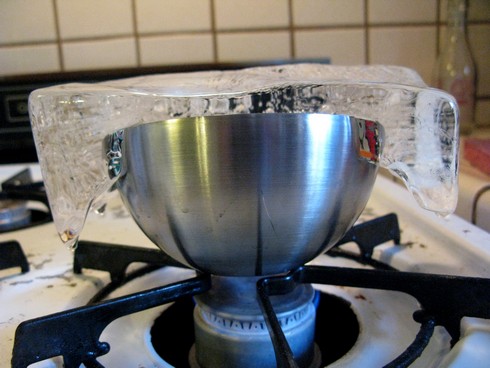 But as you can see in the next picture, it didn't quite melt evenly. The first problem with this system is that it needs some sort of holder to make keep the ice stable above the bowl. 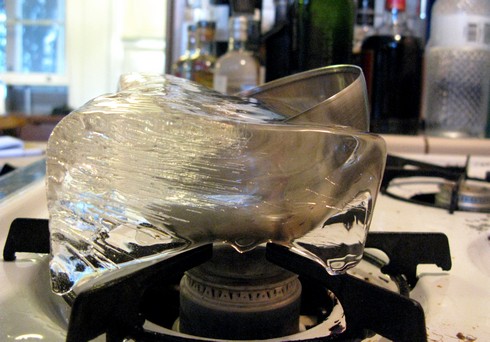 The second problem is that as the ice is melting, it gets water everywhere. A couple of times it extinguished the burner and the pilot light, so I had to relight it.

But finally, I had it melted as much as it was going to melt. 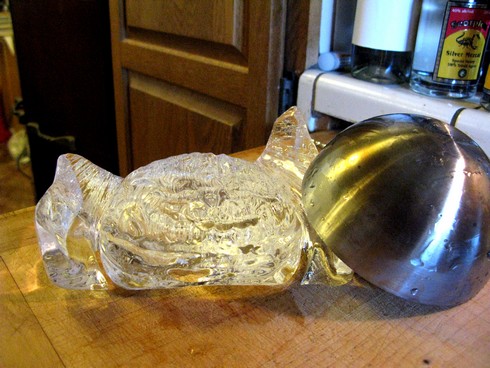 As you can see it's not a perfect half-sphere. This is because of a third problem: the melting ice inside the bowl fills up the bowl. This water then gets hot and melts the ice into a flat-ish shape.

It was then easy to pick off the sides of this half-sphere with an ice pick. 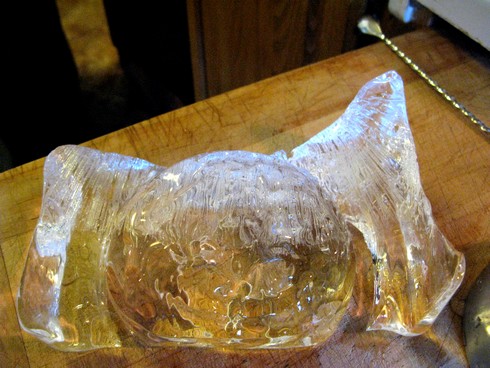 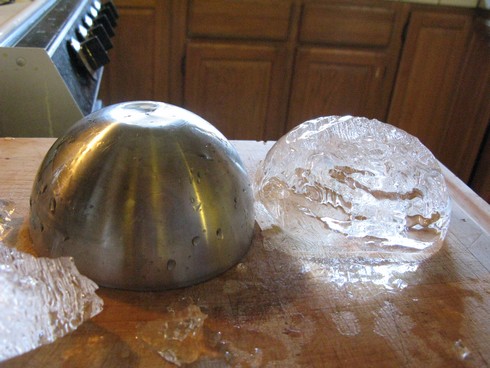 And the final ice is more the shape of a silicone breast implant than a half-sphere.

Also note that in a real attempt I'd need an ice block twice as tall as this one so that I could turn it over and melt down the other half.

1. Drill a hole in the bottom of the bowl so that the melting water inside it has somewhere to go.

2. Perhaps I can do this more slowly with less heat. This will more mimic the copper ice ball maker that is only a little warm and mostly uses conductivity and pressure to make its spheres. With an only slightly warm bowl I may not have the problems with the flattened sphere as the water collected at the bottom may not melt the ice so much.

3. I may need to devise a method for collecting water so that it doesn't extinguish the burner. The copper ice ball maker has a collection tray at the bottom. I could use a metal pan or larger bowl.

4. Have any other ideas?

I would buy one. I admire your commitment to concept however.

I have one of those ice trays Tim mentioned. The issue is getting it clear throughout the ball. Otherwise they work great.

To contain your melt outside of the bowl, a cake pan on the burner? It may also distribute the heat more evenly.

Love your trials and can't wait to see the updates. Go Ice Guru!

I say go with an ice pick and a sharp knife. I've got iceballs down to about 3.5 to 4 minutes, but I still haven't done your clear ice method.

These make ice balls, but they do not make clear ice balls.

Cake pan is a good idea. I only have a glass one but I get they're a dime a dozen at the thrift store.

Maybe you could use something like these cannonball molds, used for making fishing weights:

Attach some guide rods like on the uber pricey copper molds, then pre-heat the halves in warm water, which will hopefully give you enough carry over heat to melt through the ice.

There are also metal candle molds, which might work with your cooler method.

Thanks! I was looking at other kinds of molds but hadn't seen these. At one point I almost ordered a pair of meatball scissors:
http://www.amazon.com/gp/product/B000IVGU14/ref=as_li_ss_tl?ie=UTF8&tag=crampercom-20&linkCode=as2&camp=217145&creative=399349&creativeASIN=B000IVGU14

Did you go to the 5th Floor to use it? Why don't you just do a trade for MacCallan. They should be able to hook you up one no?

They have one at Dalva so it was a short commute. Maybe I could weasel one, but this is a humanitarian project- I'm doing it for the people!

Perhaps try drilling a hole in a round bowl, then suspending the whole thing over a pan of hot water so the steam heats the bowl?

Hmm, I worry that the steam would melt too much of the stuff outside of the bowl (ice on top waiting to melt into it) but I like the idea of suspending the bowl somehow...

Hey Camper, I made some ice ball makers.. check em out: http://sugarhousedetroit.com/blog/?p=1336

It looks like in your pictures you set the block flat side down on the bowl. When you put a cube into a copper mold it typically goes in corner down. That way the mold is working only to round out the corners rather then "cut" a sphere from a flat side.

By the way, thanks for the "Camper" method of freezing clear ice. While breaking down a 300 lb block with a chainsaw is fun, it is much more practical for my bar to use the smaller blocks.

Thanks for the suggestion! That would definitely speed things up.

I love that people are starting to use the cooler method as their commercial ice programs!

I actually thought about this not too long ago. What if you had a spherical mold with holes on the bottom on top floating in your cooler as you freeze the block? You showed that you can make excellent box shaped cubes with plastic dividers so why not try a other shapes?

Meanwhile I'm thinking of ways to melt it into shape.

In fact they already make spherical ice trays. can't you just drill whole in that for the air to escape and submerge it in your cooler to see how it freezes?

Yes this is one thing I'd like to try. Not terribly practical, but would beinteresting to see if it works!

Well it seems there is still some air trapped in the middle. Just insulating would make it freeze more slowly, which in itself may make clearer ice. That technique could be useful for making any shape ice i would think....

Tempting - Was looking for something that's heated and round - maybe I'll give it a try....