Home Books Blog Clear Ice Talks Hire Me About Search Contact
Mistakes Were Made: The Negroni Sbagliato
Tales of the Cocktail Preview: What the V.O.C. Did for the Modern Bar

A Negroni or Two in Florence

When I was in Florence with Bombay Sapphire, we had an education session by Luca Picchi. Picchi has taken it upon himself to study the history of the Negroni cocktail and the man who inspired its creation. 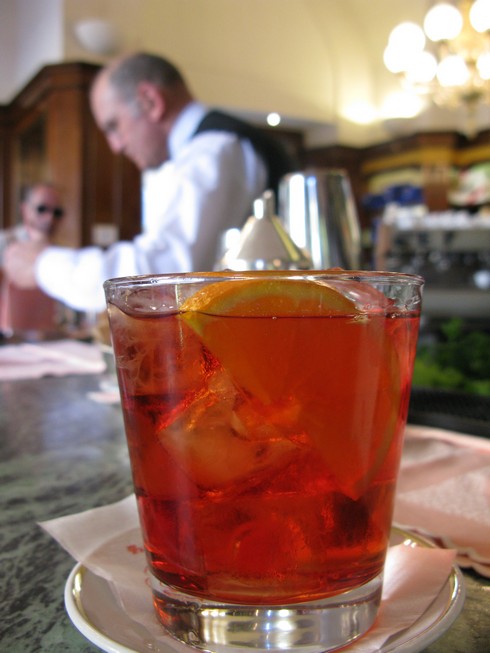 He published a book, "Sulle Tracce Del Conte" about the life of Cammillo Negroni. The book has been translated into English and may be available at Tales of the Cocktail this year (Picchi will be there) if they settle some international copyright issues.

According to Picchi, Negroni was an Italian playboy who fathered an illegitimate child and decided it was best to skedaddle. He moved to the United States and became a big cattle rancher near Saskatchewan, Canada.

He moved back to Italy in 1912, and wasn't welcome in Florence initially,but soon enough he was frequenting the bars of the city.

It was at Cafe Casoni where the drink bearing his name was invented. Negroni would frequent the place and asked for something stronger than his usual Americano. The bartender replaced the soda water with gin and the drink was born. 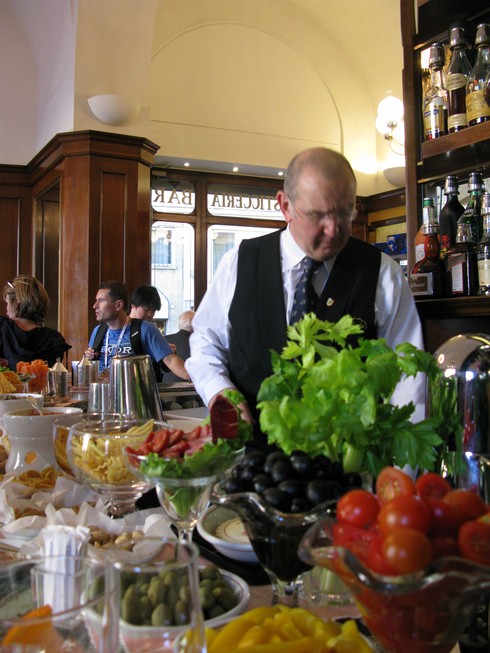 Currently, Picchi works at Caffe Rivoire and I stopped in for a drink. (If I remember correctly, Casoni and Rivoire had the same owners, and now Casoni is a store owned by Roberto Cavalli, so Rivoire is considered the inheritor of the Negroni legacy.)

Living in San Francisco, I thought that all Negronis were made the way they make them here- stirred, served up, and garnished with an orange or lemon twist. Not so! 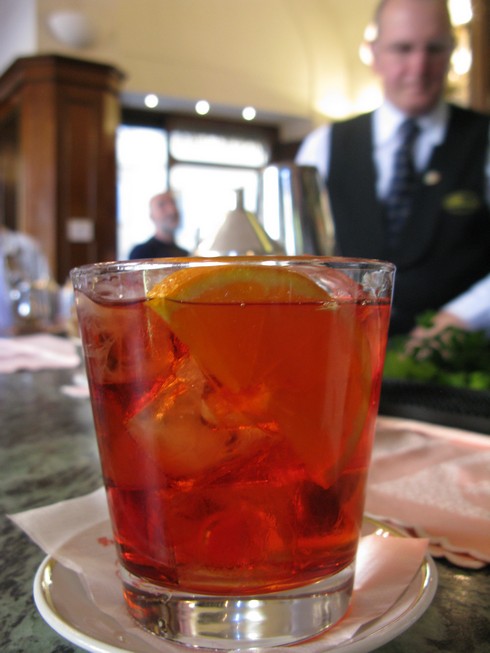 This is not the case in Italy, where Negronis are always made on the rocks and with an orange slice (rather than peel) garnish. I stopped in to Rivoire for a Negroni (or two) from Picchi, and on a hot day on Florence it was delicious.

At the bar, they have a plaque dedicated to the Negroni. I think it may be the same plaque that was once at Casoni. 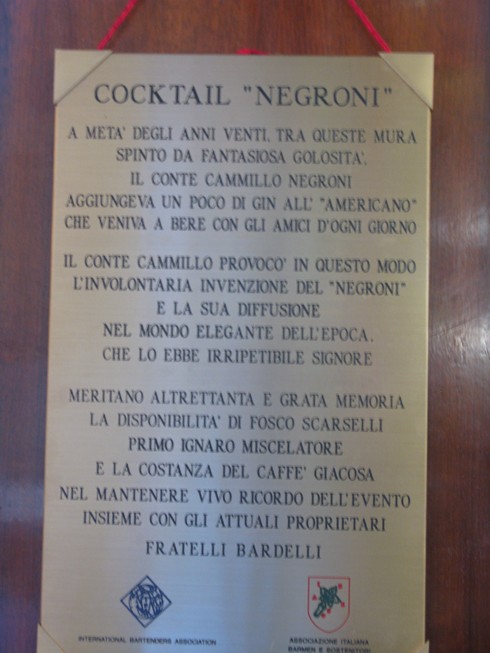 Thanks to Francesco Lafranconi who translated the plaque for me:

In the mid-twenties, between these walls, inspired by glutton delicacies, Count Camillo Negroni would add some gin to the existing Americano recipe, which he used to enjoy daily with friends.
This practice made Count Negroni the undisputed inventor of the Negroni and he was responsible for spreading it among the jet set society of that time.

A note of recognition and appreciation also go to Alfonso Scarselli the first skillful barman to have mix that recipe based on the Count request and the support of the Bardelli Brothers, the current owners, which keep promoting the legacy of the birthplace of the Negroni.

So, if you happen to be traveling to Florence any time soon, I recommend that you stop in to the Caffe Rivoire to have a Negroni from Luca Picchi.

Grandios Pictures in this Article, I get thirsty. :-)

I found there was quite a variety of Negroni variations offered and available in my travels in Italy. The first question often asked when it's ordered is "Campari or Aperol?". Aperol is a lot less bitter and sweeter than Campari and perhaps more American-friendly. I also ask for lower proportion of the Rosso Vermouth and a splash of soda...the addition of fizz brightens up the drink on a hot day.

Has the English translation of the book become available?

If so, does anyone know where to buy it?

The answer to this question is in the post.

If I might tweak the translation a bit:
"In mid-twenties, in these walls,
Count Cammillo Negroni, driven by imaginative gluttony, added some gin to the Americano, which he came to drink with friends everyday.
Count Cammillo thus gave accidental invention to the Negroni and its spread in the elegant world of the time, as was this incomparable sir.
Also deserving of gratitude and memory, his willing bartender Fosco Scarselli, the unaware first mixer [Scarselli was the bartender who made the drink for Negroni.] and the ownership of Cafe Giacosa who kept alive the memory of this event as well as the current owners, the brothers Bardelli.

The newspaper article, “Corse Matin, 1980”, Pascal Olivier invented the drink in Saint Louis de Senegal as a present to his bride and a digestive aid for himself where he was married and lived from 1855 to 1865. He married in 6 May 1857 in Saint Louise de Senegal to Blanche Elisa Gerard Fontallard (Paris 6 March 1834-Paris 23 April 1879. She was the daughter of Henry Alexandre Gerard Fontallard, a famous painter, and Adelaide Elisabeth Hellant. Later the Negroni drink was adopted by the “Cercle Militaire”, in Paris. The Famous painter Fontallard has his own Wikipedia page.

The Count Camillo story is fabricated and the fact that no Count Camillo Negroni or anyone by that name appears in the official Negroni Genealogy last updated by the Henry de Pazzis, Marquis d'Aubignan, in order to gain admission to the Knights of Malta. The genealogy is over 500 pages long and goes back from the 11th century to the present time. THERE IS NO ONE NAMED "CAMILLO" IN OUR GENEALOGY. Pazzis, Henry de Seguins Pazzis d'Aubignam Marquis de, Genealogie de la Famille Negroni et ses Alliances, 1980, 315 page manuscript prepared as one of the requirements to become a Knight of Malta.


The Negroni is equal parts of gin, sweet vermouth and the Italian liqueur Campari, garnished with an orange peel and served on ice. The version seen here was served at Republic on Elm Street in Manchester. (MARK HAYWARD/UNION LEADER)

6/2/2014 -- Manchester resident Noel Negroni at his Manchester home. MARK HAYWARD / UNION LEADER
WHEN IT COMES to legend, two of the more specious varieties are bar tales and family lore.

One grows in exaggeration and improbability as spirits flow and the night drags on. The other twists along as generations retell the story, embellishing each version with family pride.
So keep that in mind as I report a dispute raging in blogs, Wikipedia pages and the mixology world. It pits the lore of the Negroni family — a Corsican family of nobility whose descendants include a resident of our city — against a story that originated in a Florentine cafe. (That means a bar in Florence, Italy.)
Both lay claim to the Negroni, a ruby-colored cocktail with enough European mystique that it conjures notions of a Ferrari hugging a serpentine Mediterranean coastline, or a suave James Bond-like character negotiating a different set of curves.
The drink is equal parts gin, sweet vermouth and the Italian liqueur Campari, garnished with an orange peel and served on ice. Its origin has at least two tales:

• The bar story: The Negroni was invented by Count Camillo Negroni, a supposed one-time American cowboy and gambler who settled in Florence. In 1919, Count Camillo had the bartender at his favorite watering hole mix the drink to his specifications.
The story is spelled out in a 2002 book, “Sulle Tracce del Conte: La Vera Storia del Cocktail Negroni” (“On the Trail of the Count: The True Story of the Negroni Cocktail”). And you can find the story recounted on Wikipedia, the New York Times and the San Francisco Chronicle, to name just a few publications.
• Family lore: Manchester resident Noel Negroni assures us that an ancestor, the French Gen. Pascal Olivier de Negroni, invented the drink in 1857 in the West African country of Senegal. He invented the drink to help his new wife’s digestion. Family lore has the general lifting a Negroni to toast to her health on their wedding day.
Noel Negroni is a former U.S. Air Force captain. He and his wife run an insurance premium recovery firm — Adams and Morse — in Manchester. The former Digital executive moved here in 1992.

His Corsican blood boils when it comes to the Count Camillo story.
“This is a worldwide attack on the Negroni family, and they will not stop,” he said at his Prospect Street home earlier this month. “The British and the Italians are ganging up on the Negronis.”

In the interest of full disclosure, Noel lives a few blocks from me. On occasion, we get into lengthy conversations, especially when I’m out walking my dog and he’s on his morning walk. I’d call us acquaintances; we’ve never socialized.
Noel says the Count Camillo Negroni story is a ruse, created by a bartender in Florence as a marketing ploy. Negroni family members have gone through records in Florence, Genoa and Rome and found no Count Camillo, he said.
No doubt, there are some red flags in the Count Camillo story. There are no photos of this supposed count and one-time American rodeo star. (Wikipedia uses a photo of Noel’s ancestor on its Negroni page.) And the New York author of an English-language book on the Negroni cocktail stopped emailing me when I asked about photos and his research.
But Noel’s story has its problems, too. He can provide no family letters or hand-written recipes that mention the drink. Ask about proof, and he points to a 1980 article in Corse Matin, a newspaper in Corsica. It seems, the article reads, that Gen. Pascal Negroni invented the drink.
But that one-paragraph article said that the general invented the drink in Paris on “the eve of the Great War,” which would be 1914, at a military officers club. Noel said the family is now doing research in Senegal.
The Campari company is sticking with the Count Camillo story, said Dave Karraker, director of public relations for Campari America.

“As with almost every popular cocktail with some history behind it, there are always numerous tales around how it was started,” Karraker wrote in an email.
A third book on the Negroni cocktail and its culture is in the works. (Note to self: Lots of money to be made writing about obscure cocktails.) That book will mention Noel’s version, author Nargess Shahmanesh Banks said in an email.
“I don’t feel we’re in a position to comment on which version we feel is authentic,” Banks wrote.

So it’s best to close with the drink itself.

“How to Booze,” a 2010 book published by Harper, calls the Negroni “seductive, sensual and complex.” In 2002, New York Times writer Toby Cecchini wrote: “The gin gives it a racy, astringent structure, while the Campari imparts the play of sweet and bitter. The vermouth grounds these elements with a dense, smoky winyness that triangulates with precision.” (I love food writing.)
I visited two bars on Elm Street before I could find one — Republic — that could make a Negroni. I’ll refrain from trying to mimic Cecchini’s verbose description. More simply, I’ll say its taste conjures up our venerable New England drink — Moxie. With a shot of gin added.
Mark Hayward’s City Matters appears Thursdays in the New Hampshire Union Leader and UnionLeader.com. He can be reached at mhayward@unionleader.com.
________________________________________