Boy is this ever a topic I'd rather avoid! However there is no denying the historic link between sugarcane production.

We were tracing the spread of sugarcane and the sugar industry from the Old World to the new. But slave labor used to harvest and process sugarcane began long before sugarcane was brought to the Caribbean.

Before sugarcane made its way to the Atlantic islands off the coast of Spain and Portugal, slave labor was used in Crete, Cyprus, and Morocco. Warfare and plague had diminished the local labor force so slaves were 'needed' to harvest it.

Slavery and sugar remained tied for a very long time, most notably so in the New World. 11 million African slaves were exported from their homelands. Six million of them went to work making sugar- the most of any profession. When the Haitian Revolution occurred near 1800, ending slavery there, it cut off 43 percent of Europe’s sugar supply.

One cool note: female slaves were often the distillers of rum in the islands. 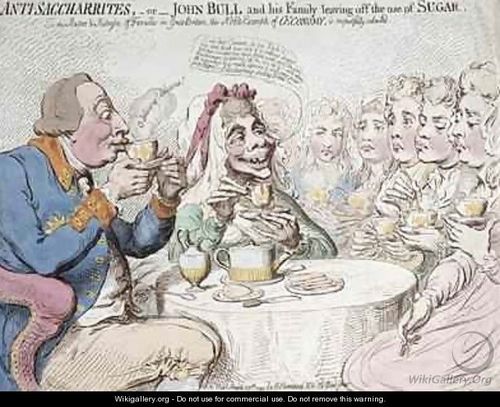 The abolition movement in England linked sugar to slavery, and encouraged people to boycott sugar. The movement was largely lead by women, who purchased the sugar for the home. They were known as anti-saccharites.

1807 the British House of Commons made the slave trade- but not slavery- illegal.  It wasn't until the 1830s before it was by British law.

The Emancipation Proclamation that finally freed the American slaves took effect in 1865.

After the abolition of slavery in Cuba in 1884, all Caribbean sugar was made by non-forced labor.

After slavery ended, new labor was needed to harvest sugar cane, as many former slaves weren't about to take it up again.

Laborers came from many places, but especially from China and India. They worked as  indentured servants, paying off their ride to the new island for several years. Indentured workers were called coolies.

This and other policies kept former slaves from buying land and becoming economically equal to whites.

After 1869, Trinidad granted small parcels of land to people who completed their indenturship. They bought up 23,000 acres between 1885 and 1895.

On Mauritius, nearly half a million Indian workers imported between 1834 and 1910. At one point they produced 9.4 percent of the worlds sugar supply, mostly providing it to Britain.

Though it was far from smooth sailing, eventually things worked out. According to Sugar: A Bittersweet History by Elizabeth Abbott:

“Mauritius is an anomaly in the colonized sugar world. Its minorities, Creole and white, have accepted its Indianness- at 68 percent of the population, it has the largest concentration of Indian outside India- and a succession of Indo-Mauritian leaders have governed. An elite minority speaks English, the country’s official language, while everyone else speaks French-derived Creole. Hindu and Muslim holidays are observed, and since 1877, the Mauitian currency has been its rupee. Mauritius’s unique circumstances and the dynamics of its society have enabled its people to unite in racial harmony. Ironically, they have embraced sugar as their common denominator.”

In Hawaii, the indentured laborers were Chinese, Japanese, Korean and Filipino. Chinese workers were later banned from immigrating because the powers that be felt there were too many who stuck around after their indenture time expired.

What fascinates me about the post-slavery indentured servant era of sugar production is the racial and cultural makeup of Caribbean islands that results from it. There are interesting mixes of whites, blacks, and Asian/Indian populations that vary depending on the island. The cross-cultural pollination over many years has lead to some fascinating local customs, celebrations, and cuisines that we think of as unique local island traditions when we visit on vacation. You go to Martinique and it's all very French and people drink champagne on the beach. You go to Trinidad and eat roti and other Indian food for every meal. As it turns out, those traditions developed due to the unique mix of people from diverse parts of the world, united under a shared history of sugarcane.

The Emancipation proc was issued in '63 and didn't end slavery anywhere by law...that would be the 13th Amendment, passed as a consequence of the Civil War in '65 which legally and officially ended slavery in the US.