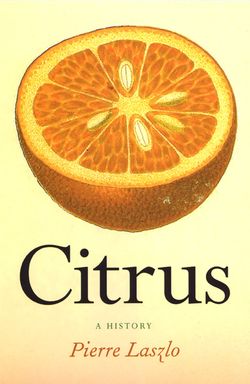 Citrus: A History by Pierre Laszlo is a weird book. The first two sections contain detailed information about the species, spread, and cultivation of citrus around the world. The third section contains chapters like "Symbolic Meanings of Citrus" and "Image of Citrus in Poetry," which I didn't find terribly engaging.

So let's dwell instead on the first parts where the good stuff is. Here are some facts I highlighted.

"If Judaisn accounted for the cirum-Mediterranean spread of citrons, Islam established a major beachhead for the cultivation of citrus to the Iberian Peninsula."

"Sour limes (the kind most often found in the grocery store) originated in northeastern India and were brought by the Arabs to al-Andalus."

Three orange trees planted by Eliza Tibbets in 1873 were the foundation of citriculture in California. One of the trees survives to this day.

It wasn't until 1795 that British seamen started getting lime juice to prevent scurvy, earning them the nickname "limeys." Scurvy dropped from 1457 cases in 1780 to 2 in 1806. 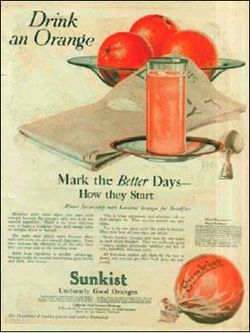 Humans don't have the ability to synthesize Vitamin C, but most animals do.

Nobody used to drink orange juice. It was during an orange glut in California that the idea occured to an ad man to sell more oranges and save trees from being cut down. He created the slogan "Drink An Orange" and sold it to Sunkist. In the early 1920's orange juice became part of the American breakfast.

So: The book has some good information and some not-so-useful stuff.

There are a few other books on citrus - has anyone read any? Any good?

The book "Limeys" by David L Harvie is a fairly comprehensive look at the introduction of limes into the British navy's diet through the work of Scottish Naval surgeon Peter Lind if anyone is interested in finding out a little more about that specifically.