I recently received an email from Gordon Ryan of the forthcoming bar ReviveR in Gosford, Australia, who has been experimenting with some of the ice concepts posted here on Alcademics (an index of all of the ice experiments on Alcademics can be found here). He agreed to let me share his trials with y'all.

I’m going to be opening a new bar about an hour north of sydney in a few months time and one of my key things is to get ice that compliments the drinks we’ll be serving. I recently went to Tales and saw both the ice sessions, so picked up some great tips there, but your post on using the cooler to make the ice inspired me to see what I could come up with, so I thought I would share my efforts. Please excuse the roughness of the build as it was something that I threw together as a proof of concept.

His first experiment is with a homemade and extra-large version of the Polar Ice Tray that I wrote about here. (It might be best to check that post out if you're not familiar with it.) Gordon writes:

I started by buying a largish plastic crate and then a bunch of 2.5 Litre tubs (2.5 Quart?).  I also bought some expanding foam filler, set two of the smaller tubs into the foam and then waited for it all to dry. 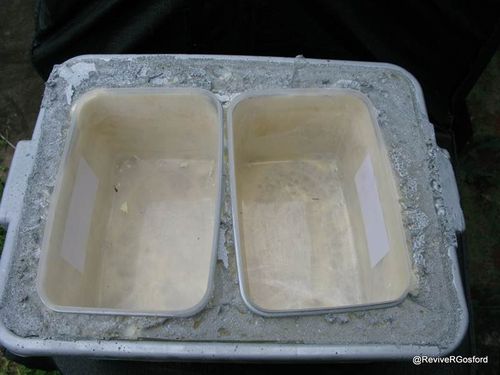 I then took one of the tubs and drilled a series of holes in the bottom. (This is to imitate the Polar Ice Tray.) 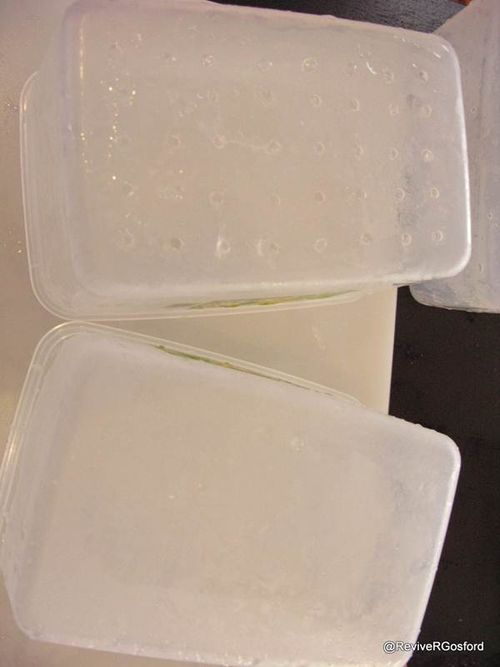 (He then placed the perforated tray into a solid tray and placed that into the insulated cooler. The next picture is the result.) 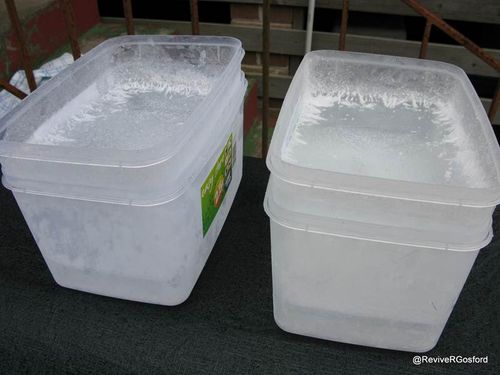 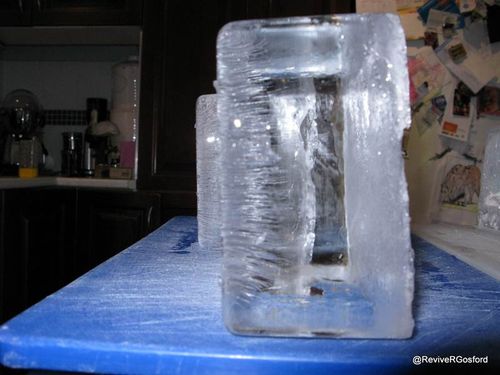 He says, "And so this was the result.  Not perfect, but still pretty good I think."  Agreed!

For the next experiment, he created an insulated ice cube tray, sort of a version of the Igloo cooler method that fits ice cube trays. In his words:

I also grabbed some of the Styrofoam boxes today and made a new tray specifically for the Tovolos. 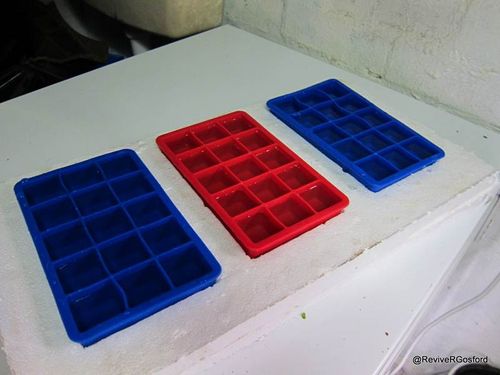 I started with a box that was used to ship broccoli, then cut it down so I had sheets of foam.  I then traced out the trays, then cut out the holes.  Once that was done, I used spray adhesive and glued it to one of the uncut sheets. 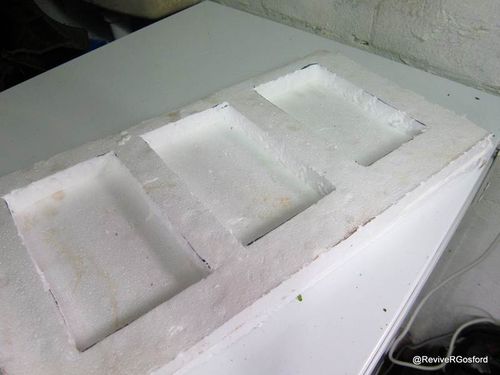 Then he added the ice cube trays back in as pictured above, and froze them. And here is a nice cube they produced. 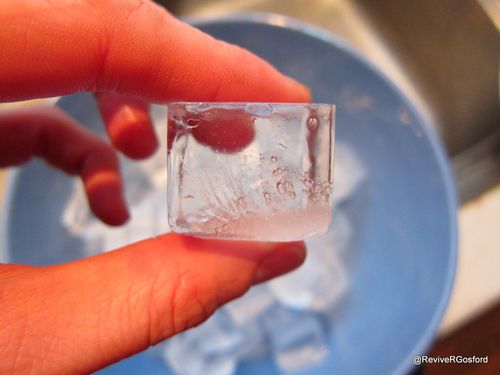 He says "I think the key is to take the ice out of the freezer while there is still water in the base as you can see you can get some great results at the top of the cubes and then it gets cloudy at the bottom."

Agreed. It's the same with large ice in the Igloo cooler. The cooler method (controlled-direction method, pond method, whatever we're calling it) does not reduce the amount of trapped air or impurities in ice. It only controls where in ice they form - in the last part to freeze.

Thanks for sharing Gordon!

Do you know what the temperature of the freezer was when this test was conducted? Was distilled, tap, or filtered water used? I have been trying this with my ice maker in my freezer and have not been able to obtain the same results. I have insulated the bottom of the ice making machine with Styrofoam and sealed it with tape. Any tips?

While I don't know the answer to your questions specifically, it might have something to do with using an ice maker. Is the insulation placed so that each cube (I'm assuming its a cube machine) is individually insulated? It only works if the only cold air is coming from one direction. It's not so much about insulating the machine but each piece of ice. I don't know too much about ice machines though...

Do you happen to have the contact information from the person who ran this test? I would be very grateful. :)

Hi, I just found out about this post and it's exactly what I was looking for !
I've been looking for days for something as efficient as the igloo cooler method but since we're in the winter, getting one of those is pretty hard and pretty expensive. Plus, this method is definitely gonna fit the little space my wife is willing to let me use in the freezer. Plus plus, the materials are available right at the corner shop. AWESOME !

Thanks a lot Gordon for thinking of it and thanks a lot Camper for putting this experiment on your blog which I just discovered and it's a gold mine !

... ps I'm talking about the ice cube tray but the first method is pretty cool too. It just seems to require more crafting and using expanding foam which is most of the time a pain in the ass.

I've looked up for the Polar Ice Tray but it doesn't seem to exist anymore.

If you've got any better advice to make homemade clear ice cubes for cocktails (I'm a GinTo lover from Belgium btw) I'd be really glad to ear about it.

nevermind I found it http://www.polaricetray.com/

If you're low on freezer space, then I'd recommend buying a cheap aquarium pump (like this one). It'll work in an ordinary uninsulated container (or even better with just some bubble wrap over the top) and will give you a great bottom-up freeze -- this is the most space-efficient method I've found so far to make clear ice at home. Check out the thread at http://www.alcademics.com/2014/12/making-a-clear-ice-block-from-the-bottom-up.html for more details (including my comments toward the bottom).

Not sure how pure the tap water is in Belgium, but here in London impure water was the thing that really screwed up all the top-down methods for me.