In studying sugarcane and sugar, we've looked at its biology, origins, spread to the West, and its previous nefarious association with forced labor. (Go here for the project index.)

In today's post we'll look at how sugarcane was processed in the olden days to make cyrstallized sugar. Most of this information comes from the sources cited here.

Sugarcane is first harvested. This was (and still is in many parts of the world) done by hand. First the cane fields are burned to remove excess vegetation and to kill off things like rodents and snakes, then it is cut. I believe that when using modern machines to harvest cane they don't need to burn the fields first.

Then the watery juice must be extracted from the cane. A while back I purchased a stick of cane and tried to get the juice out myself. It was a pretty massive failure. 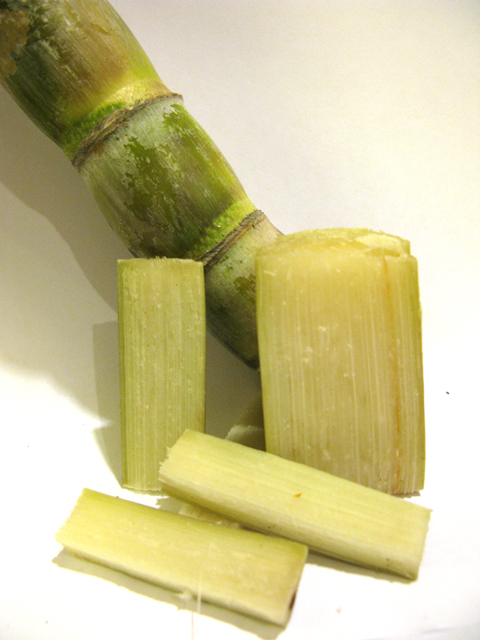 Sugar cane is chopped, pressed, pounded, or soaked to remove the liquid from it. I don't know how the soaking method might work though - anybody have an idea? I am guessing the fibers are shredded and it is washed with lots of water to get the sugar to separate from the fibers. Tequila (post-baking) is shredded and washed to release its sugars so perhaps that's what my book meant by 'soaking.'

Anyway, then the sugary liquid is heated. This removes water and concentrates the sucrose that eventually becomes supersaturated in the solution. (This is the opposite of adding sugar to water. At first the crystals dissappear into solution until it can't hold any more, then crystals will no longer go into solution. In sugar production, they take an un-saturated sugar/water liquid and remove the water until it becomes saturated.) Crystals then begin to appear in the liquid and then must be separated out.

The hot crystal-containing liquid was then poured into conical containers with a hole at the pointy part on the bottom. As it cooled, the solid sugar would stick to the sides and the liquid molasses would drip out the bottom.  What was left was a solid cone of sugar.

White sugar was preferred to (and more expensive than) the brown stuff that forms naturally. One method to create a whiter product was to put wet clay on top of the cone. Water would drip from the clay through the cone and wash it. This was called "clayed" sugar and was one of many categories used to describe the quality of the sugar, along with muscovado, refined, and double-refined. Sugars from different regions were considered superior to others: Brazilian sugar was once considered inferior to sugar from Jamaica and Barbados, for example.

The liquid that remains at the end of the process is molasses. It still contains sucrose but not enough to crystalize. But as we know, it can still be fermented and distilled into rum...

I think the "soaking" works using a process like osmosis and/or using chemicals. I think I read about this somewhere many years ago, but I may just be crazy.