In the Solid Liquids Project (project index here) we are experimenting with the best methods to dehydrate liqueurs, and then putting the dehydrated liqueur to good use.

This is one of those uses.

I've been using a food dehydrator as one method of dehydrating liqueurs. It works well enough, though other methods are faster. In order to use it, I insert plastic trays into the dehydrator shelves so that the liquid won't pour through the holes.

These trays are actually designed to make fruit leathers. The instructions on how to do so come with the tray, so I knew as soon as I got enough liqueur sugar I'd be using it for this.

On my first attempt, I followed the instructions a little too closely. Basically you use apple sauce to form the base layer of the fruit leather, then add other fruit to it to flavor it. The example recipe given is to use:

To this I added 1/3 cup dehydrated Campari sugar and mixed it up in the blender.

I spread this out over two of the circular trays and let it dry for 14 hours, which was a little bit too long as the fruit leather was cracky in some parts and they didn't roll up. 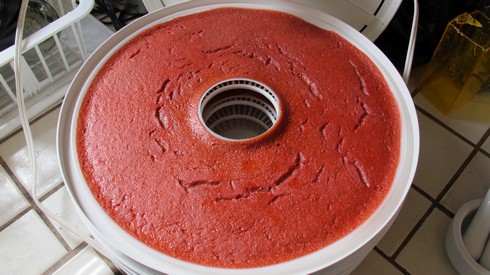 They were delicious, but unfortunately you could barely taste the Campari; only a little bitterness.

On my second attempt I left out the strawberries as a flavoring agent, and I did much better. My recipe was simply:

Add ingredients to a blender and blend until blended. Spread out over one tray in fruit dehydrator and dehydrate for about 12 hours, until there are no sticky spots. For thinner roll-ups, spread out over two trays. 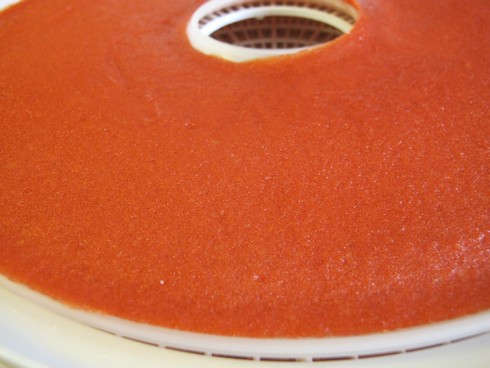 These were done to the perfect amount, and rolled up quite easily. 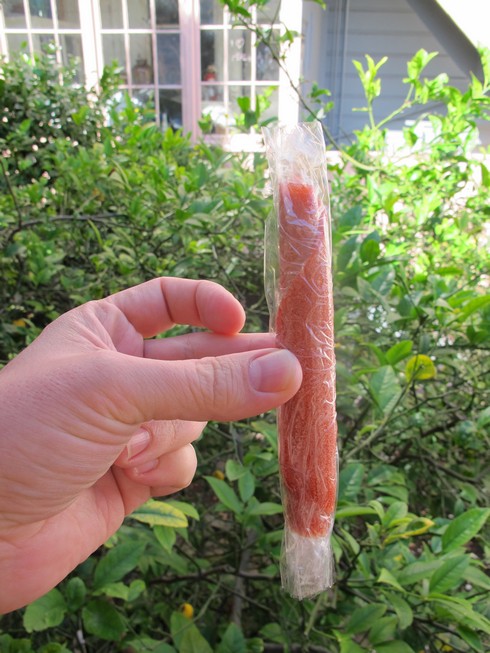 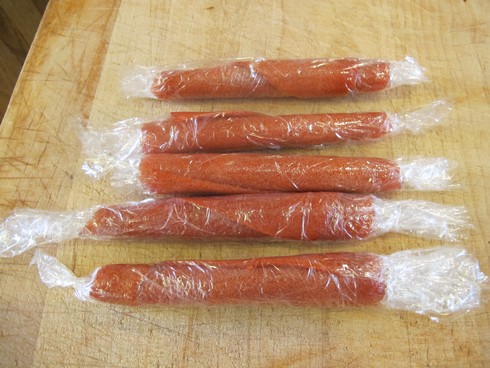 They were also delicious. The Campari flavor kicked in as you chewed the roll-up and in the after-taste. They were amazing but as I say in the recipe, could use more Campari!

For both recipes, I attempted to roll up the roll-ups into a straw, because a Campari straw would be fabulous.

On one attempt I rolled a roll-up around a chopstick then waited to see if it would stick. It did not so I then weighed it down and put it in the oven to see if the ends would melt together. They did not, so I put it in the microwave to see if I would accomplish it that way, but it just came apart. Alas. I'll keep working on this.

Good question. I have not tried I believe that the alcohol will throw off the mix a bit as it's so liquid (it takes a lot of Campari to make that much Campari powder) and also alcohol is a solvent so it could push around the other ingredients.

That said, I bet that if you just burn off the alcohol in Campari (heat it just to boiling and let it reduce by a lot) then you're left with a non-alcoholic Campari syrup, which might work in this recipe just fine.