I hit a snag in the Solid Liquids Project (project index here) as I can get some liqueurs to dehydrate into a powdered sugar, but not others.

In the last two posts, I think I've identified a commonality in the liqueurs that did not crystallize: they are probably sweetened with something other than (or possibly in addition to) cane/beet sugar.

I believe (but am not certain) that X Rated Fusion, Hypnotiq, and Courvoisier Rose are sweetened with fruit juice. Wild Turkey American Honey and Irish Mist are sweetened at least partially with honey. None of these crystallize when heated in the various methods used to make other liqueur powders.

So I decided that I had better learn about these various sweeteners.

Table sugar, which comes from either cane or from sugar beets, is sucrose. Fruit sugar is fructose. Honey gets its sweetness from the fructose and glucose. My first thought was that perhaps sucrose crystallizes readily and fructose does not.

Fructose, or fruit sugar, according to WikiPedia: "Pure, dry fructose is a very sweet, white, odorless, crystalline solid and is the most water-soluble of all the sugars. From plant sources, fructose is found in honey, tree and vine fruits, flowers, berries and most root vegetables... Commercially, fructose is usually derived from sugar cane, sugar beets and corn." Thus, there is definitely a way to get fructose to crystallize- can it be done with conventional oven methods? I need to research this further.

Glucose is sometimes called grape sugar. If what I understand is true, you don't find it just laying around. Wikipedia says, "Glucose is produced commercially via the enzymatic hydrolysis of starch. Many crops can be used as the source of starch. Maize, rice, wheat, cassava, corn husk and sago are all used in various parts of the world. In the United States, cornstarch (from maize) is used almost exclusively. Most commercial glucose occurs as a component of invert sugar, an approximately 1:1 mixture of glucose and fructose." I'm not sure that helps at all.

Returning to honey, we know it can crystallize as we see it around the neck of the jar. To find out how, I again turn to Wikipedia.

Fresh honey is a supersaturated liquid, containing more sugar than the water can typically dissolve at ambient temperatures. At room temperature, honey is a supercooled liquid, in which the glucose will precipitate into solid granules. This forms a semisolid solution of precipitated sugars in a solution of sugars and other ingredients. Since honey normally exists below its melting point, it is a supercooled liquid. At very low temperatures, honey will not freeze solid. Instead, as the temperatures become colder, the viscosity of honey increases. Like most viscous liquids, the honey will become thick and sluggish with decreasing temperature. While appearing or even feeling solid, it will continue to flow at very slow rates.

When sugar syrup is supersaturated, the crystals soon fall out of sollution. Why should honey act differently?

The melting point of crystallized honey is between 40 and 50 °C (104 and 122 °F), depending on its composition. Below this temperature, honey can be either in a metastable state, meaning that it will not crystallize until a seed crystal is added, or, more often, it is in a "labile" state, being saturated with enough sugars to crystallize spontaneously. The rate of crystallization is affected by the ratio of the main sugars, fructose to glucose, as well as the dextrin content. Temperature also affects the rate of crystallization, which is fastest between 13 and 17 °C (55 and 63 °F). Below 5 °C, the honey will not crystallize.

From this I am guessing that in order to make honey crystallize I can either add some seed crystals to it (table sugar), or try to affect the fructose/glucose balance. Possible ways to do this could be:

Since I didn't have any glucose or fructose sitting around, I decided to try adding some table sugar. I did this previously using Wild Turkey American Honey and the oven dehydration technique. It did not work.

This time I decided to try the stovetop crystallization technique, adding extra table sugar to Wild Turkey American Honey. I added some as it was boiling, and then as it hit the candy stage at which a liqueur would normally crystalize, I added more. I kept adding more and more in the hopes that it would crystallize in some way. Eventually I had probably added more sugar than there was liqueur in the first place but it never precipitated out of solution.

When it hardened it was hard but still sticky; kind of like peanut brittle. This type of dehydrated liqueur won't make a dry sugar when crushed, unfortunately. 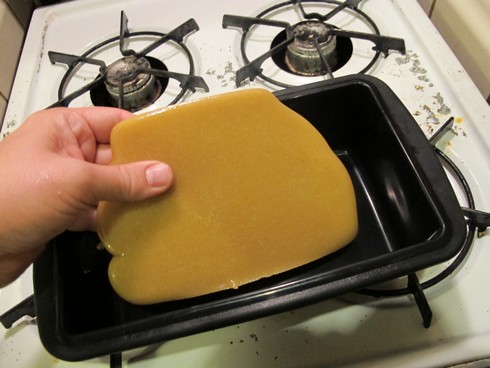 So I need to think of some new ideas. Any suggestions?

I'm trying to figure out if I can make sugar crystals from fresh fruit without artificial additives?

It wouldn't come out as sugar crystals - just dehydrated fruit. It's fructose here, not sucrose, so the chemistry is probably different. I guess you'll have to search other places. Good luck!

Is this quest still alive in 2016 or has the grail been found?

I have not found the grail, alas.