So far in the Solid Liquids Project (project index here) I've been experimenting with the best way to get liqueurs into a solid/powder/sugar form.

I have performed all of these experiments with Campari so far, but now it's time to try some other liqueurs. Since Skyy Spirits is sponsoring this project, I began with other liqueurs from the company. 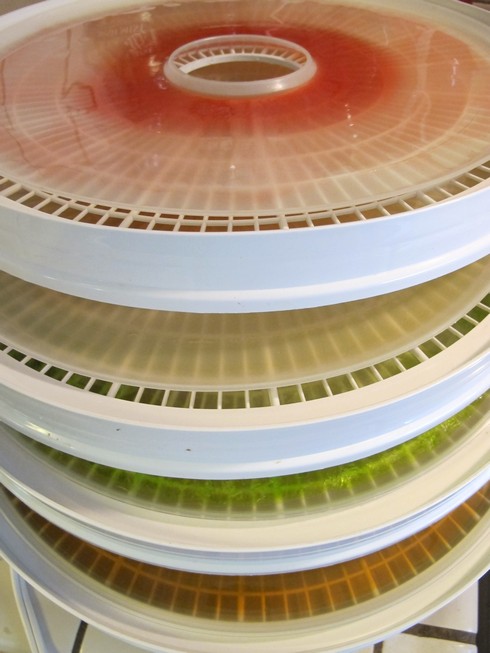 After a standard amount of time (24-36 hours), only Midori had crystallized. 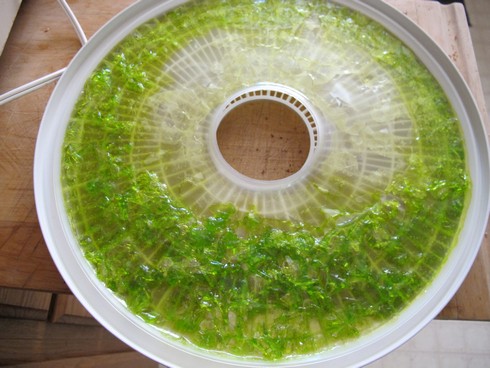 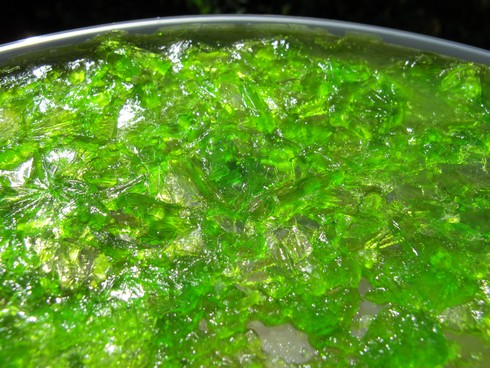 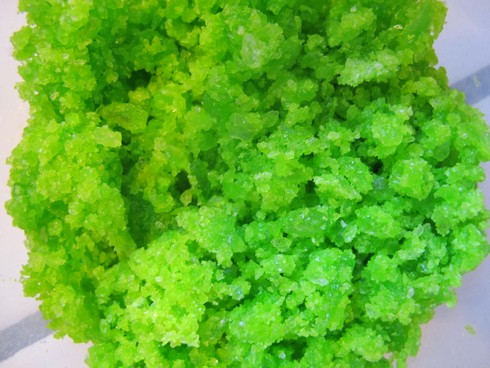 Second Attempt: A Long Time in the Dehydrator

The others remained partially liquid, like a thick syrup. 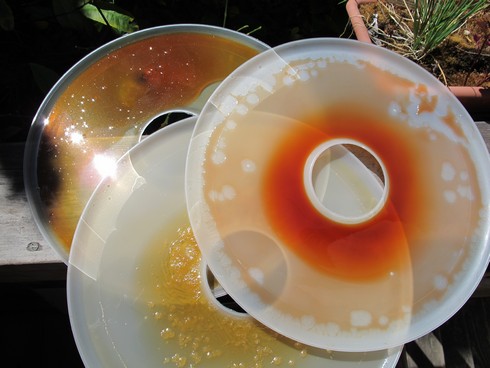 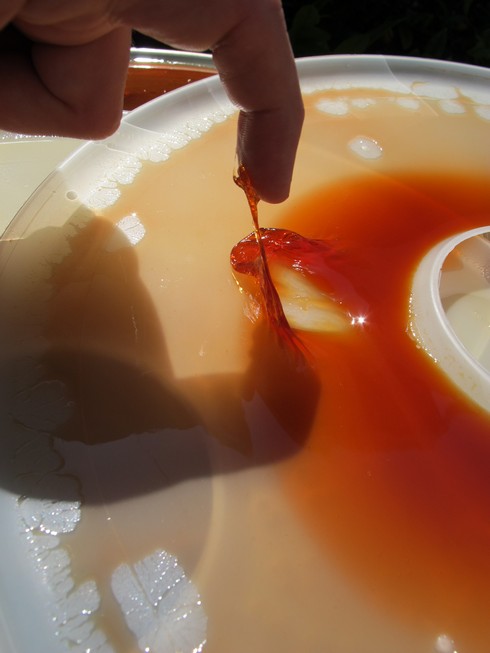 So I put them back in the dehydrator for another two days. They never crystallized, but when I let the trays cool, most of the liqueur did turn solid, forming almost a plane of glass that easily cracked. 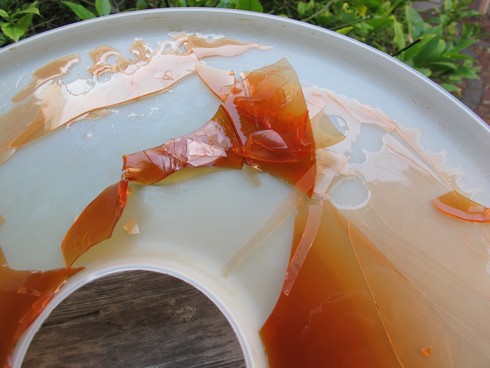 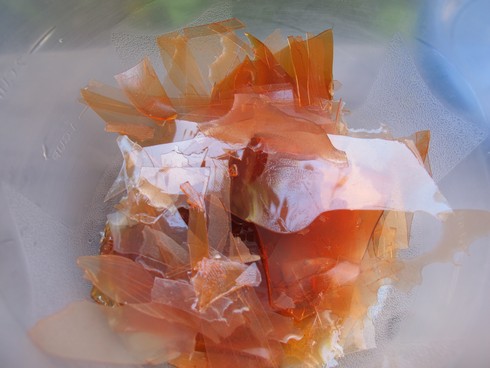 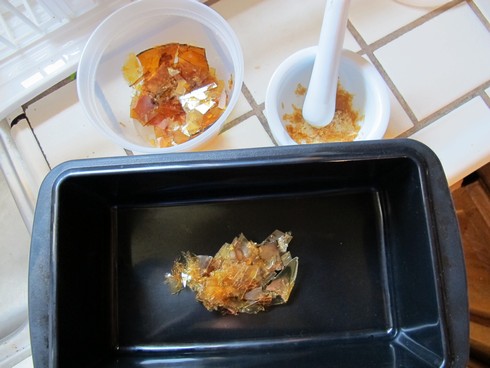 Next I tried to use the oven to see if the temperature was the problem; perhaps these liqueurs needed higher temperatures to crystallize? I took the sticky solid liqueurs from the dehydrator and put them in the oven at 170. The result was just a sticky puck of gooey liqueur. Still not crystallized. 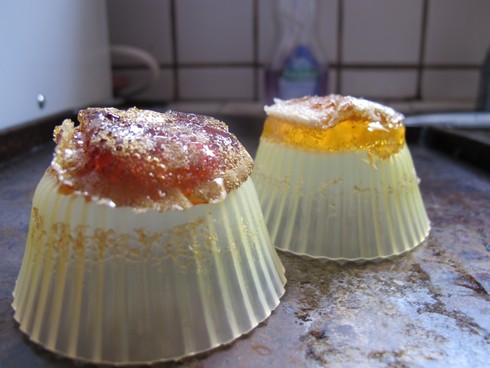 Then I repeated the oven attempt, this time using liquid liqueur (last time I took it from the dehydrator after that didn't work) but set at the lowest temperature, 140 Fahrenheit. This also did not achieve crystallization.

What if, I thought, the problem is that there isn't enough sugar in the liqueur to crystallize? To test this theory (assuming it would fail, because as the liqueur dehydrates the water and alcohol disappear, making a concentrated sugar solution so it shouldn't matter how much sugar is in there as long as there is some) I added sugar to Wild Turkey American Honey.

This liqueur wouldn't actually hold much additional sugar. I added one part sugar to two parts Wild Turkey American Honey and it would not fully dissolve into solution. 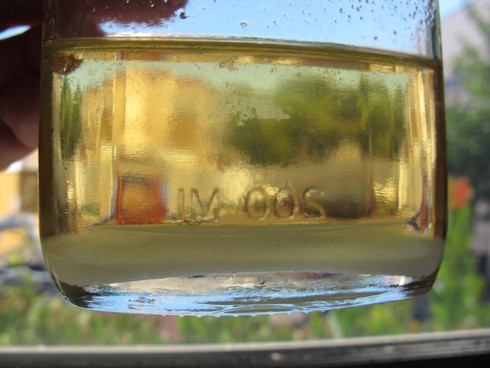 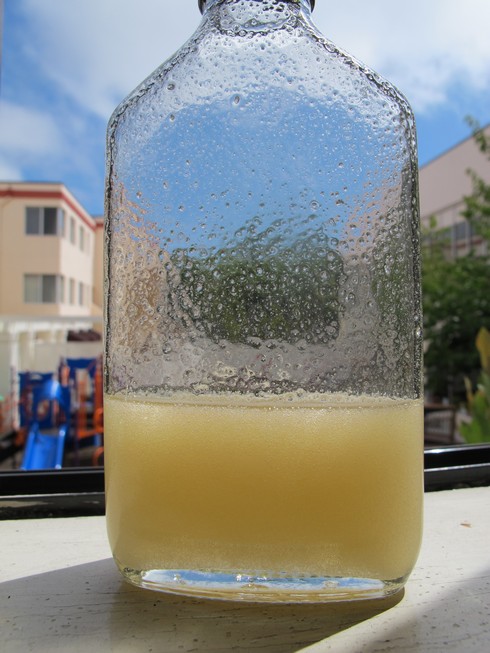 So I gave it a hard shake and put it in a cupcake cup and put it in the oven at 170F. After a day it mostly crystallized, but still left a slightly sticky puck of non-solid liqueur at the bottom. 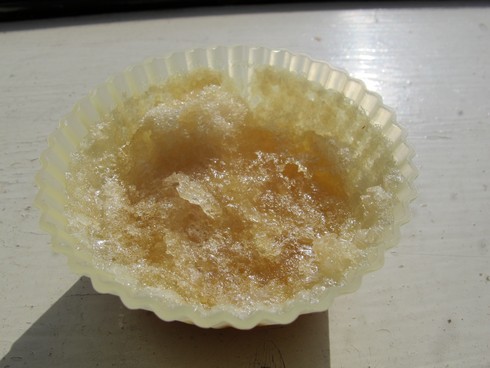 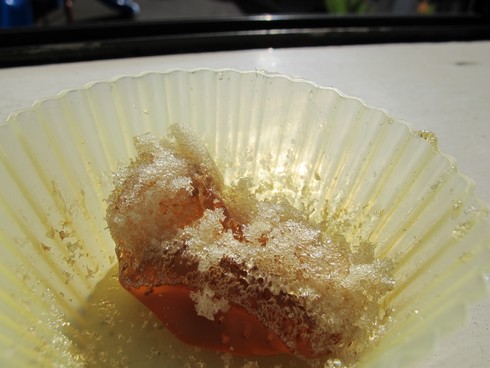 When I ground up this sugar in a spice grinder, it became a powder, but the powder was incredibly sticky. You couldn't use it to rim a glass or anything like that. In the storage container I put it in, it quickly formed a solid gooey mass. 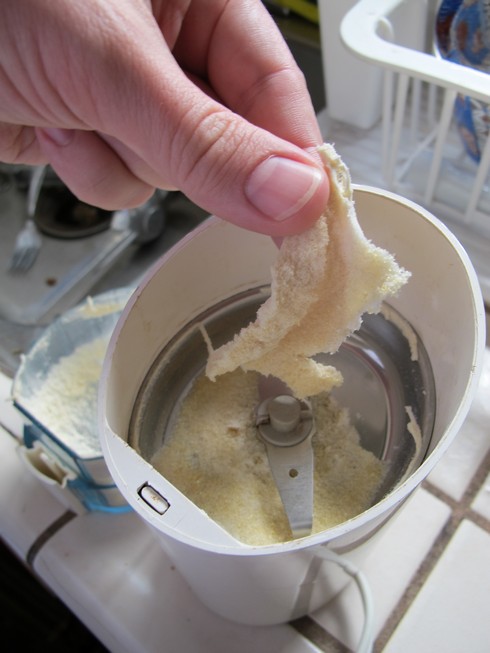 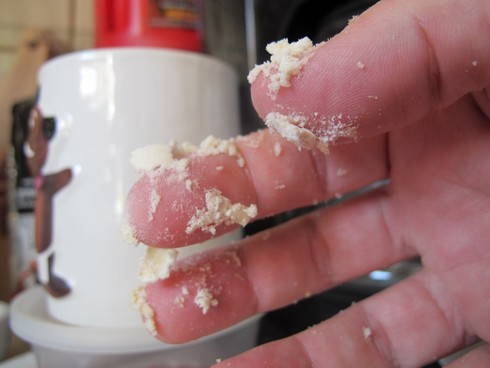 I was slightly despondent: Only two out of five liqueurs that I tried to dehydrate were successful.Would these methods only work on a fraction of liqueurs? 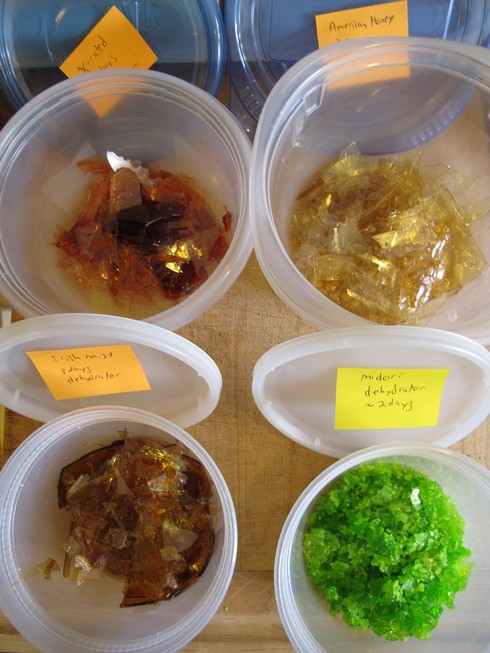 But then inspiration hit....

I'm having the exact same problem with Gran Gala. Can't wait to see the solution you came up with.

Not to spoil the surprise or anything, but so far I haven't come up with a solution! Trying to identify a pattern in which liqueurs dehydrate and which don't.

Well, I actually live near the distributor for Willpowder so I'm going to run by there and grab some tapioca maltodextrin to try with some Bailey's. I'll give it a try with some other stuff as well to see if that might work.

Nice- I was thinking of picking some of that up but haven't yet. Keep us posted!

Is there an easy method to test for glycerine? Do the non-drying liqueurs have any similar mouthfeel to Fee's bitters, particularly the sweeter ones?

I am trying to discern if it might be glycerin or just glucose/fructose as opposed to sucrose. More on that in my next post.

Loving this priject. Curious that you are having better luck with nut based and bitter liqueurs

Good news and bad news. The good news is that it does work. Some liqueurs work better than others but you can definitely do it and the liqueur doesn't even need any fat to do it. The mildly bad news is that it takes a lot of tapioca maltodextrin to make it work. About 7:2 maltodextrin:liqueur is what I've found so far. It does taste just like the liqueur, however, and you don't lose any of the alcohol in the process. I set up a site that goes a little more in depth if you or anyone else is interested. zymologictable.blogspot.com