My fellow judges were Tony Abou-Ganim, Francesco LaFranconi, and our host Tyler Florence. This makes me look awfully good in comparison! 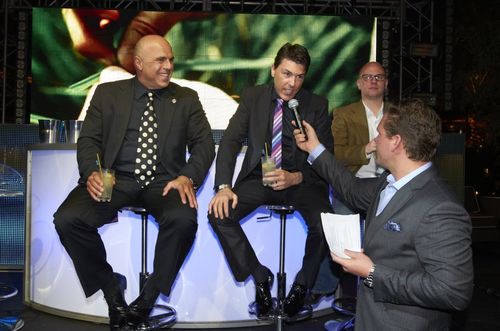 In the first round (that I did not judge), 46 bartenders from the US and Canada were judged on a single drink in shifts. From these, the top ten were chosen to compete onstage at the XS nightclub at the Wynn Las Vegas.

The challenge for the top ten bartenders was a mystery ingredient contest- bartenders had 12 minutes to come up with a cocktail using the mystery ingredient before presenting it on stage. The ingredient in this case was Bombay Sapphire East, the newly-launched brand extension with lemongrass and black pepper added to the botanical mix.  Furthermore, the resulting cocktail was supposed to represent their home city in some way.

The top ten bartenders were:

The top three were:

Naturally, Brandon used Fernet-Branca in his San Francisco-inspired cocktail. He also used Bombay Sapphire East, maraschino liqueur, Benedictine, Regan's Orange Bitters, and sage leaves. It was garnished with orange and grapefruit twists with a sage leaf. It was a nice classic-style cocktail freshened up with sage. 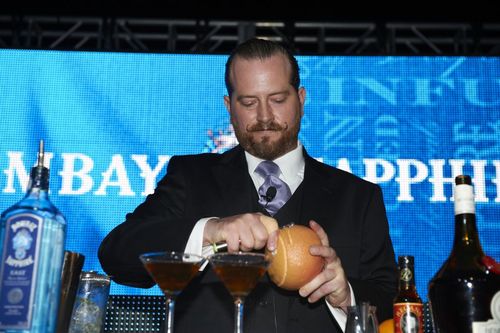 Scott made a variation of a Negroni using Bombay Sapphire East, Cocchi Americano, Aperol, and a tincture of black pepper, grapefruit, tarragon, blueberry bitters, and lemongrass. It was served up with a grapefruit peel. It was pleasantly syrupy and bitter, just like the drink it is based on. The tincture (made within the twelve minutes) was a nice touch. 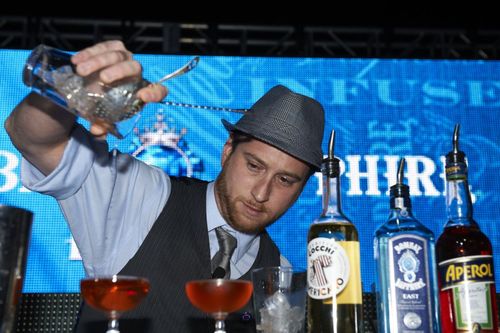 Winner of the 2011 Bombay Sapphire and GQ Magazine Most Inspired Bartender Contest: Bryan Dayton of Boulder's Oak at Fourteenth.

Bryan's cocktail was fresh and delicious, used the orchard fruit and berries of Colorado, had a freshly-made sage simple syrup, and added Chartreuse that brought all of the elements together and gave it extra depth. Bryan did everything right and his drink was the clear winner. 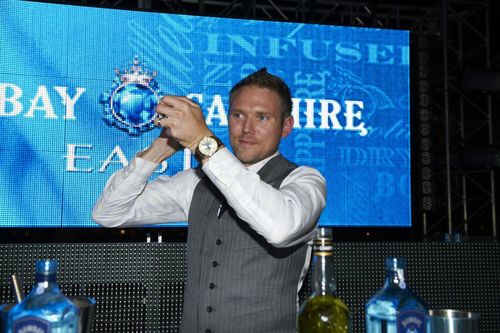 Here is the recipe - probably not the official version that will be announced later, but should be pretty close:

Shake and serve up.

Congratulations to Bryan, the runners-up, the top ten, and everyone who made it into the competition!

Interesting that Bryan shook the gin - did you notice any change in flavor (was the gin bruised at all?) due to the shaking?

Hi- the Shaking/stirring thing is not really about the base spirit, but about what else is in the drink. If it's 100% spirits/liqueurs (manhattan, martini, negroni, etc.), then we stir the drink. If it has fruit juice (pear in Bryan's drink), citrus, dairy, eggs, etc., (gimlet, margarita, lemon drop) then we shake. Of course that's just the rule; feel free to make exceptions.