During a recent trip to Copenhagen, I stayed an extra day to explore (and revisit) its bars, courtesy of the Danish Cherry Heering liqueur. My job was to run around and drink Cherry Heering cocktails at the best bars in town: tough job!

I began at Ruby, one of the city's most stylish bars. (I previously posted the menu here.) I had two drinks there, mixed up by Nick Hovind. The first was the Harvard Dropout, a spin on the Cherry Harvard that is usually made with cognac. 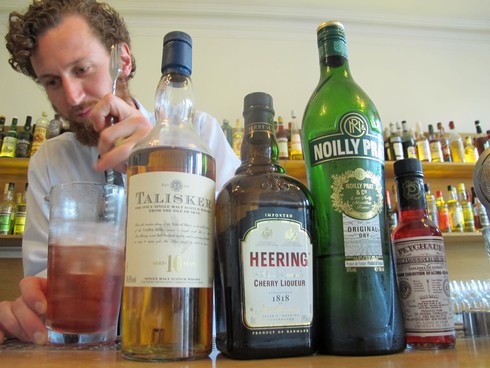 Harvard Dropout
From Ruby in Copenhagen

Stir, serve up. Garnish with a cherry. 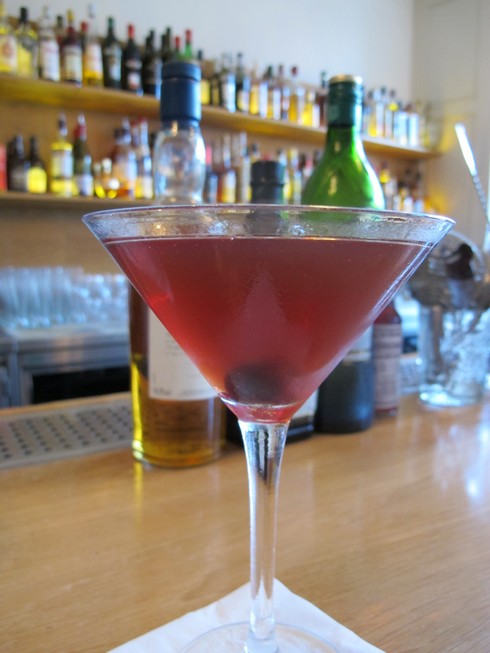 Then I moved on to the next drink:

Cherry in the Rye
From Ruby in Copenhagen 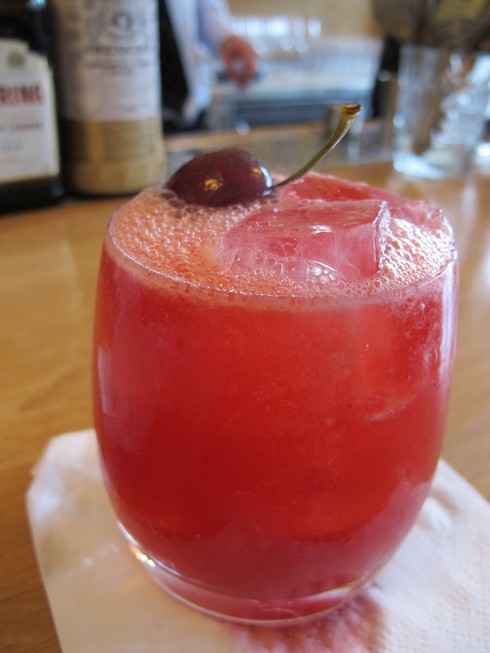 The next bar I visted was Moltkes Speakeasy. I think it is only open on Fridays. The building in which its housed dates back to 1702, but it is now owned by some trade guilds and has a Michelin-starred restaurant in the basement. The back bar is a cabinet built into the wall that may have once held financial books. The space is wonderful, the tiny bar in the front serving two rooms of tables. 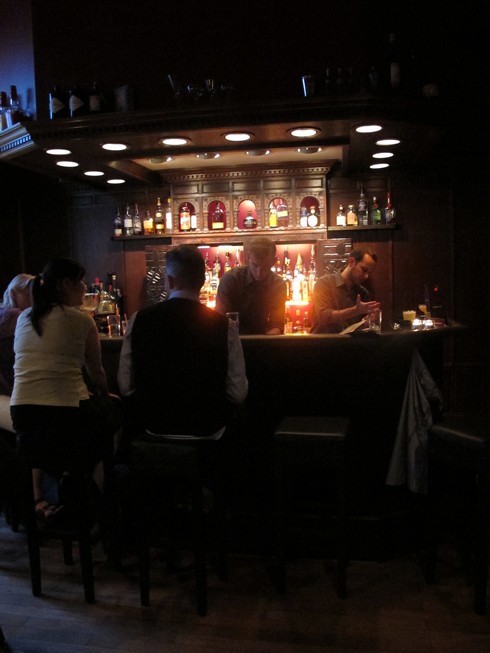 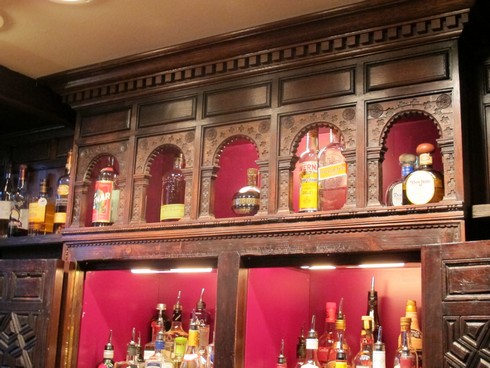 They serve classic cocktails; nothing too complicated or modern. That said, I had a modern classic cocktail there - the Copenhagen. The drink was created by Gromit Eduardsen, owner of the bar 1105, for a Cherry Heering cocktail contest in 2009. I visited Gromit's bar last time I was in the city.

The Copenhagen
By Gromit Eduardsen of 1105

Shake with ice and strain into a cocktail glass. 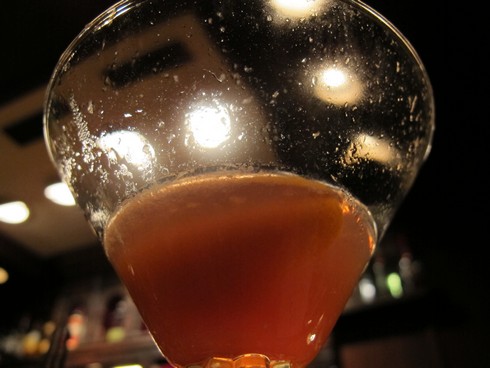 Next up at Moltkes, I had my favorite scotch cocktail and one of my favorite classic drinks of all time, the Blood and Sand. It has equal parts scotch, Cherry Heering, sweet vermouth, and orange juice.

Then it was on to my next stop, Restaurant Umami's U-Bar. The bar is chic, but at the time of the night I was there it was rather unpopulated. The bar carries an enviable selection of Japanese whiskies, plus sake, soju, shochu, and other Japanese ingredients.

There, Chris Doig served me a Night Blossom. The drink is usually served with a cherry blossom liqueur, but he substituted Cherry Heering in it, along with shochu, apple juice, and Calpico, a milk-based soft drink. 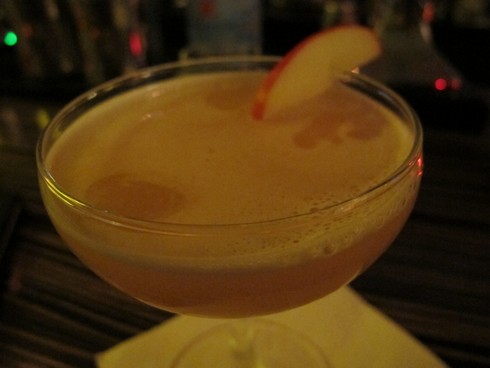 After that I went over to MASH, or Modern American SteakHouse. The restaurant is part of the same group as Umami. The place has a terrifying rabid cow on the sign- yummy? 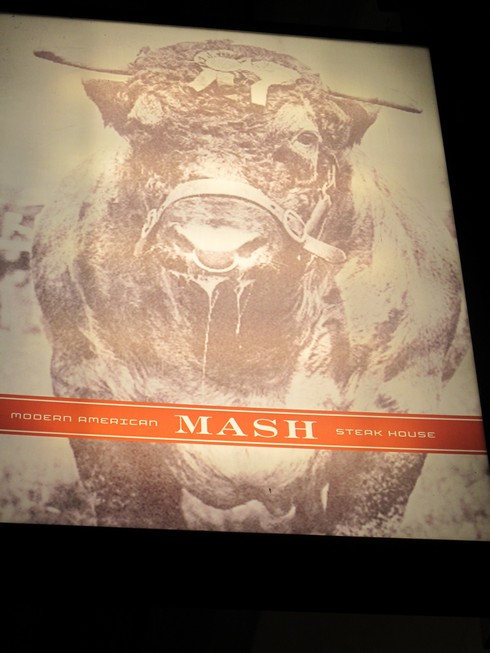 The place was jam-packed (it was Friday night, after all) with young professional-sorts out for dinner and drinks in groups after work. The only Cherry Heering drink they had on the menu was the Cherry Alexander, a verion of the famous brandy drink made with Germain-Robin brandy (they specialized in small batch American spirits, especially brandy), Cherry Heering, cherries, chocolate liqueur, cream, and muscat wine. 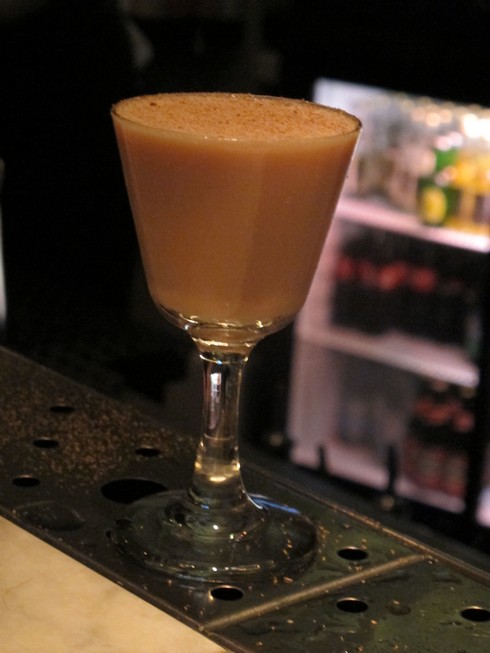 The drink was tasty, but just because I was drinking a dessert drink doesn't mean I was at the end of my drinking for the night.

My final stop of the night (and I'll note it was only my final stop because I got lost trying to find the next bar after this one) was Union. I love this bar, and you probably will too. It feels like home base. I posted the cocktail menu here. 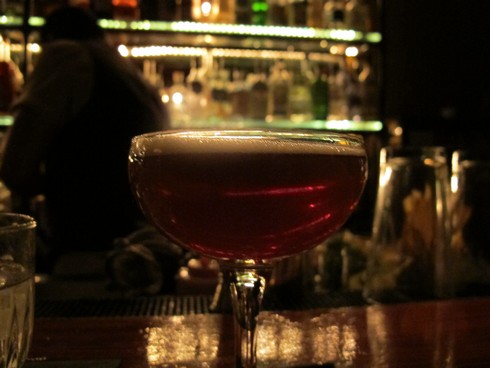 Almost (but not quite) faster than I could drink them, the cocktails kept coming out, courtesy of Geoffrey Canilao. He made me four drinks: 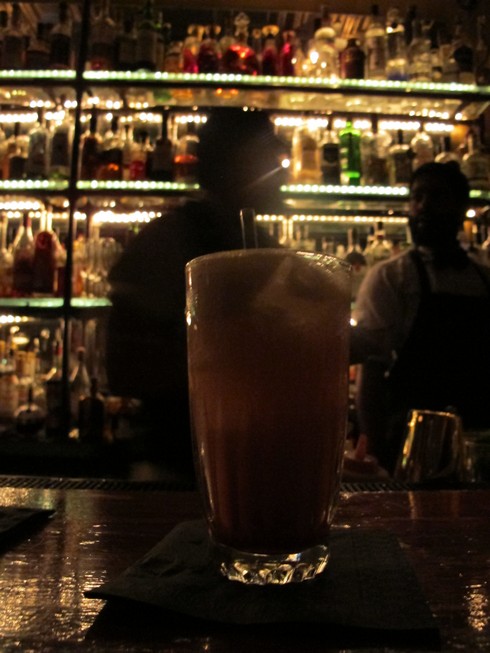 After that came my ill-fated attempt to hit 1105 which ended in me wandering the streets of Copenhagen apparently unable to read a map. Eventually I got some sense and hailed a taxi to return to my hotel.

Thanks to Cherry Heering for making the night great.

Just tried the Cherry in the Rye. Excellent drink! What is a danish cherry though?

Not sure, that's just what he specified when he muddled them in. They looked like big round soft and juicy cherries.

I just used normal bing cherries. It was delicious! Great recipes using heering. I always hesitated buying an entire bottle of heering just for blood and sands and Singapore slings. Might be worth buying now!

I find that rich berry flavors also play well with absinthe, one of my favorite ingredients.

Any recipes you wouldn't mind sharing that combines heering and absinthe?

I don't offhand. I've made a lot of recipes using raspberry syrup something like:
2 oz base liquor
1 oz raspberry syrup
1 ounce lemon/lime juice
barspoon of absinthe.

So I'd guess with Heering you might try it with bourbon and lemon for starters. Might have to increase the citrus with Heering. If you try it and find something that works, please share!