No bison were harmed in the writing of this blog post.

This summer I flew to Warsaw with ZU vodka, known in the rest of the world as Zubrowka. Zubrowka is bison grass vodka; vodka flavored with grass. The stuff tastes like caramel and jasmine and hay, and makes apple juice taste like apple pie.

Unfortunately, that delicious flavor comes from coumarin, a naturally-occurring compound that is banned as a food additive in the US. It is also in the tonka bean, which is why we can't have a historically-accurate recreation of Abbot's Bitters in the US either. (See this NYTimes story for more on that.) 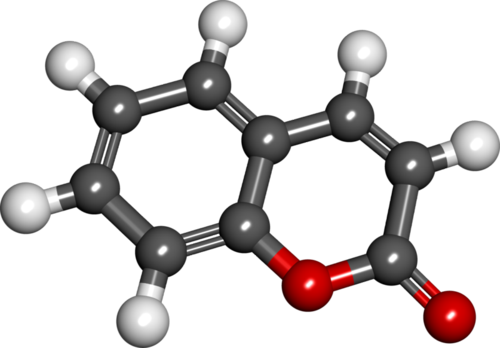 Coumarin is a blood thinner (anti-coagulant), and it is used to make Coumadin, a medicine that some people with blood clot disorders have to take before flying. Ironically, one of the people on the press trip had to take a shot of Coumadin before coming to Poland. If they had real Zubrowka in the US, she could have just chugged a bottle.

They've recreated the flavor of Zubrowka in ZU, using naturally-derived ingredients. In a blind taste test you can guess which is which, but they're pretty close.

A Trip to the Forest

We took a train for a few hours from Warsaw to Bialystok, where the distillery is located. But before seeing that, we went to see the Bialowieza Forest where the bison live and the bison grass grows. 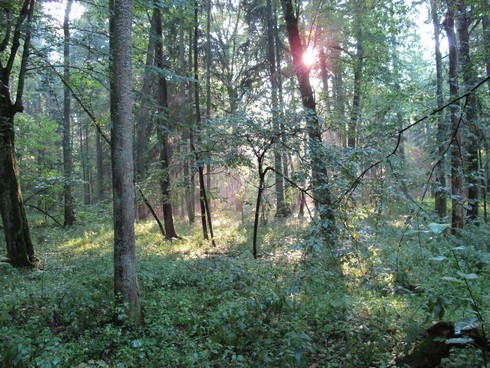 The forest has various levels of protection in different parts. The first visit we took to it was by carriage, to the most protected part. The carriages aren't just for old-timey charm: no mechanical transportation is allowed in the forest and you must be accompanyed by a licensed guide. 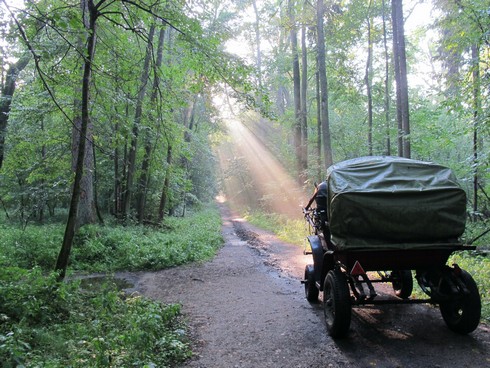 The reason this forest is special is that it has for centuries been the protected property of the kings. It was used as their personal hunting ground for bison and a food reserve for the army. The forest is a UNESCO biosphere preserve and on the World Heritage List. 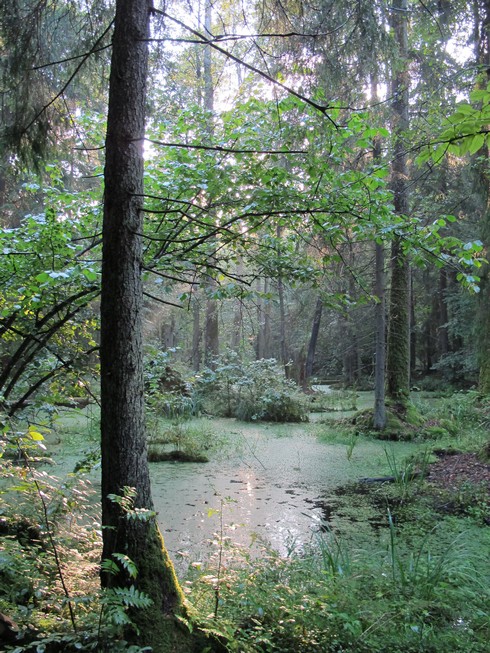 The forest is quite pretty, with tall skinny trees. This is the type of forest that would have covered most of Europe long ago.

Looking for Bison in All the Wrong Places

But to actually see the bison, you've got to get up pretty early in the morning. At 5AM we drove into the forest (this time, outside of the strict reserve but still where bison can be found) and walked along a path looking for them. 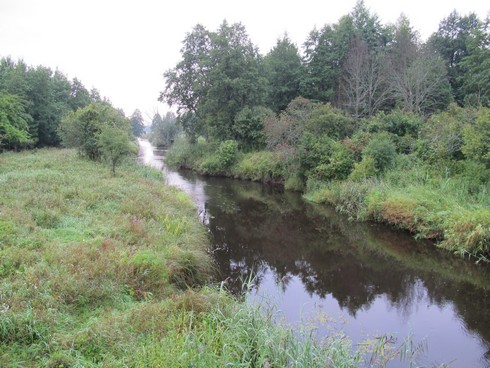 Unfortunately, none were to be found. The guide says at this time of the year the bison go into the deep forest to hide from the mosquitoes and flies, the very same ones that were biting us ferociously.

But it wasn't all for nothing. We also went searching for bison grass. The bison grass for Zubrowka is hand harvested by 21 or 22 families who know secret spots to pick it. Apparently you can grow bison grass on farms, but it doesn't have the same aroma as the natural stuff.

We walked down a trail in the forest, veered off it, cut through the woods, and found a whopping three blades of bison grass. Obviously, this wasn't one of the spots where they harvest it. But still, success! 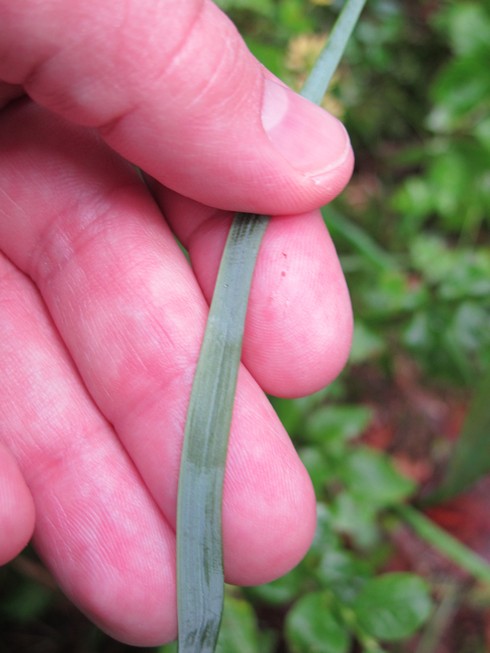 We did manage to see actual bison, though they weren't free-roaming. We went to a reserve (sort of an outdoor zoo) where they show off the bison and other forest animals. Hi bison! 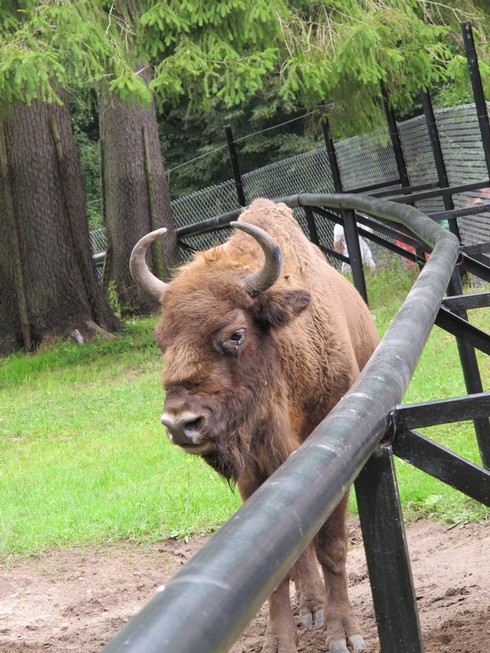 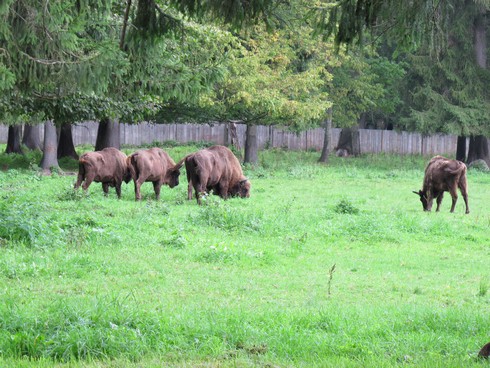 After our forest visit, we went to see the distillery in Bialystok. The place is huge, as they make a lot of vodka for their unflavored Zubrowka (not available in the US) as well as other brands. Interestingly, this is not the start-to-finish point for ZU and other brands. 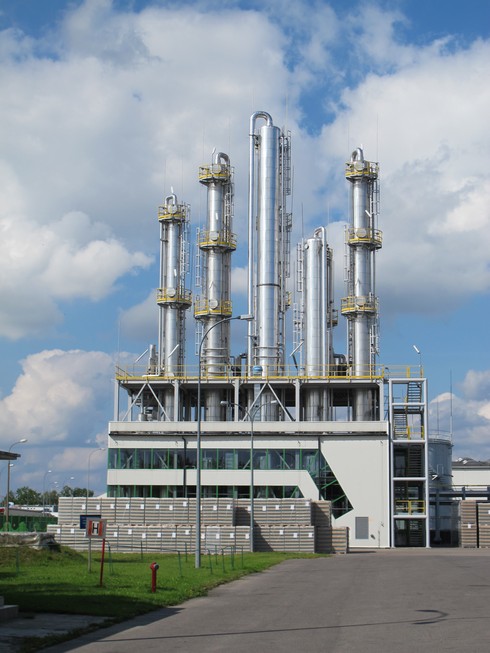 Closer to the farmlands where the rye is grown, there are smaller distilleries that do the fermentation and initial distillation. Polmos Bialystok (the name of this distillery) refines the distillation and adds any flavoring.

The bison grass is stored in a dark, refrigerated room in big paper bags. 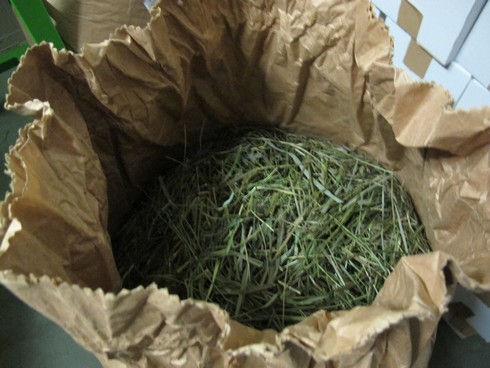 The grass used to flavor the vodka is soaked in alcohol and water in a big washing machine thing for a couple days. They make a concentrate of the bison grass flavor, then add whatever amount they need to the final blend. 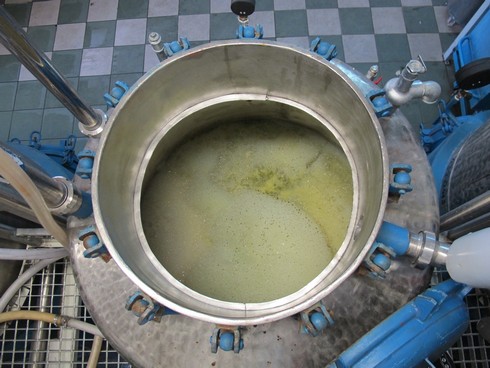 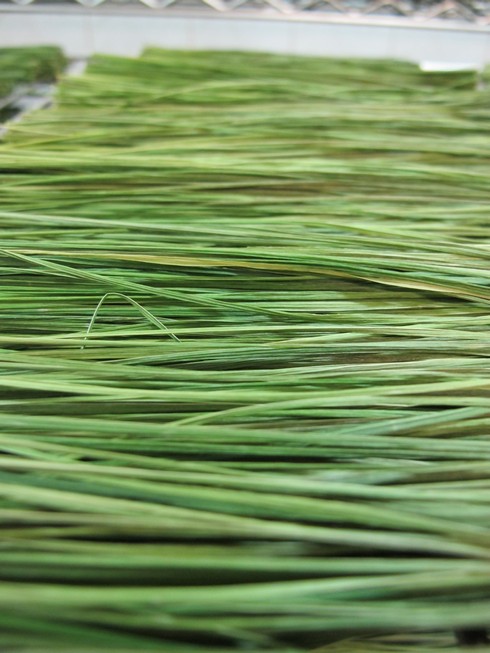 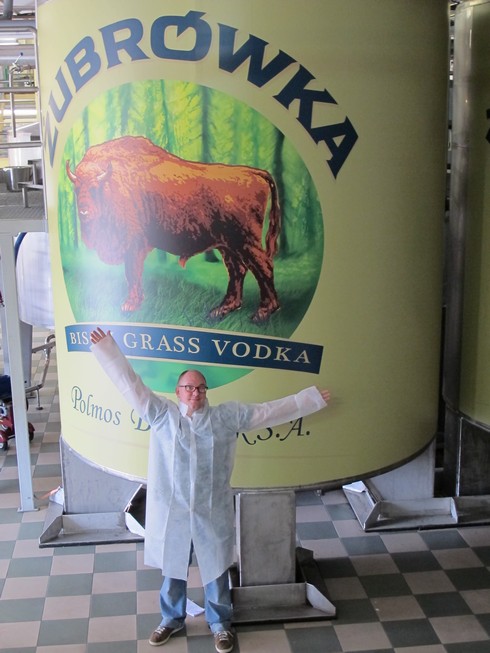 The grass that's used to decorate each bottle (there is a blade of grass in each) is soaked in higher-proof alcohol to suck out all the coumarin. It's then dried and inserted by hand in the bottling line. 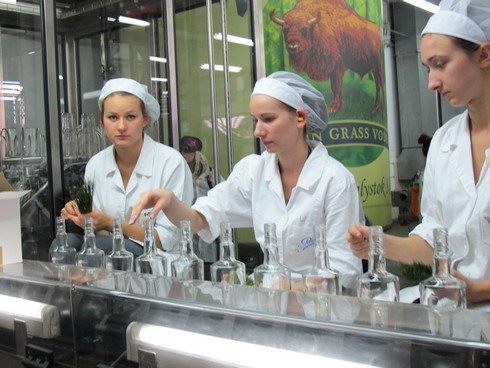 The way ZU/Zubrowka is most commonly consumed is mixed with apple juice in a drink called the Szarlotka. It tastes kinda like apple pie. It's dumb and fun and more American bars should offer it. In Poland the apple juice was pretty cruddy, and it would certainly be improved with unfiltered apple juice.

Is there any way to get a bottle of this? Are there any distributers that might ship this into the US?

Great piece! The forest looks amazing!....the girl on the left in the factory didn't look too happy you were taking her picture though.

For what it's worth, the FDA ban is actually just government silliness, while coumarin is a precursor of the drug, by itself it has no anticoagulent effects, from http://en.wikipedia.org/wiki/Coumarin: "Although coumarin itself has no anticoagulant properties, it is transformed into the natural anticoagulant dicoumarol by a number of species of fungi"

Coumarin probably is less bad for you than tons of other allowed things, certainly than the alcohol, and in any case it's in cinnamon, chamomile tea, nutmeg, etc anyway.

It's too bad, because as I discovered at a slightly less than legal tonka bean dinner a while back, it makes for some good eats, and of course drinks. I wrote a bit about it here: http://www.wordsmithingpantagruel.com/2011/01/gastronauts-chevaline-dinner-plus-tonka.html

ZU is available in the us. Go to zuvodka.com there is a search function.

Unfortunately i am pretty sure the distillery is not open to the public. I'll check and send u an email if I'm wrong.

The ZU brand has the same taste as the "original" brand?

Yes you can tell they are different in a blind tasting but ZU does taste very close to Zubrowka.

At last, after all these years of gnashing my teeth over the fantastic Tequila you get over there, I can finally laugh at how cool it is to be in Australia where Zubrowka is easy to find. Most bottle shops (aka liquor stores :) have it, even the drive through ones.

In Poland it’s dirty cheap. Outside of Poland I seen it in UK but its expensive, bottle is different and the liquid itself is paler than the original one.