On my five-day visit to Japan with Suntory whiskies I hit 21 bars by my count. I am talking about them in groups. Next up: Standing and Highball Bars.

The difference between the various styles of bars is subtle and I'm defining them as I see them. I'll be describing whisky bars, cocktail bars, highball and standing bars, and pubs/clubs/dives. As far as I can tell, highball bars are all standing bars but I'd imagine there are standing bars that don't specialize in highballs.

As you can guess, standing/highball bars are bars in which everyone is standing up drinking at tall tables rather than seated. They are popular after-work bars. Perhaps they're Japanese happy hour bars.

Anyway, in Kyoto we went to a bar called Getto, which is a pretty great name. The bar is as big as a hallway, with lots of traditional Japanese beverages. You stand up the whole time but are essentially leaning against the wall behind you. There I tried aged awarami, a beverage from Okinawa that is aged in ceramic containers. It tastes like shochu for the most part. A little gamey but nothing special. 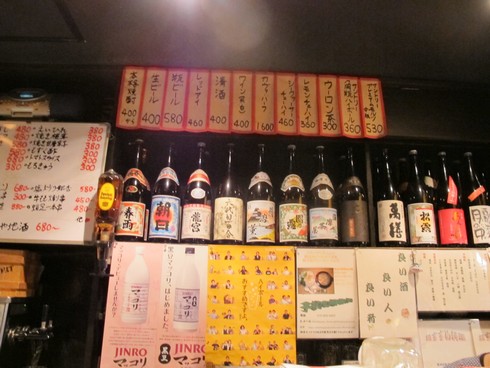 I also tried kokutojochu, which is sugar cane schochu fermented with rice mold. Basically, it's Batavia arrack and I wanted to see if it tasted the same. More or less! It was, as expected, completely disgusting, like fermented sweatsocks.

However, the cucumber was awesome. 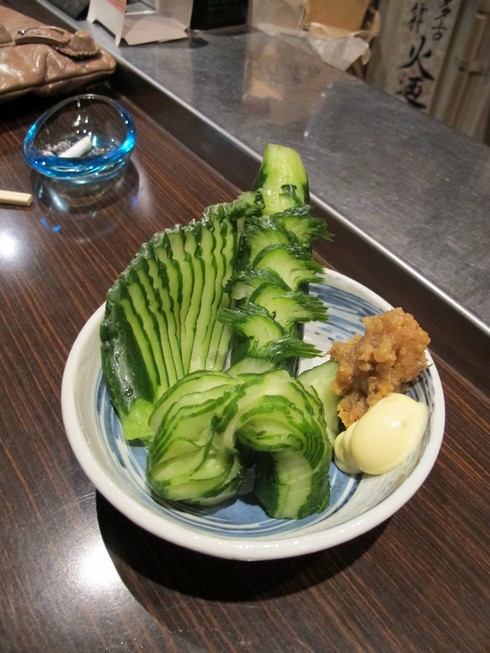 Gindaka is a highball bar in the Shinjuku area of Tokyo. It's  basically a take-out restaurant with one window facing the street and another into a tiny room for standing customers. They have a tap that serves highballs of Yamazaki 10 and Suntory Whisky (a blended whisky sometimes called "koku" which means "box" as the bottle is short and squareish.) 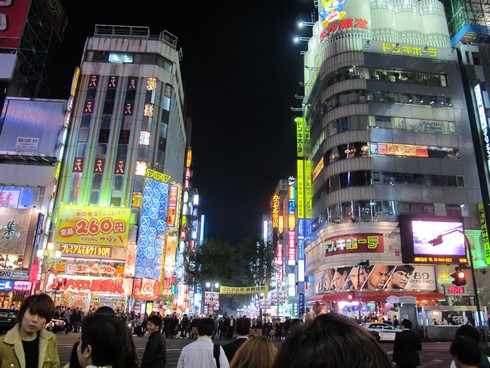 (This is the neighborhood where Gindaka is located. Busy, to say the least.) 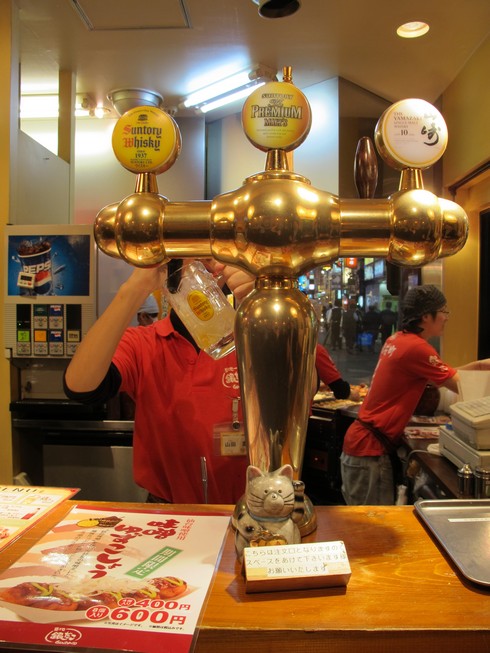 (Highballs on tap, with Suntory Premium Malts beer also on tap in the middle.) 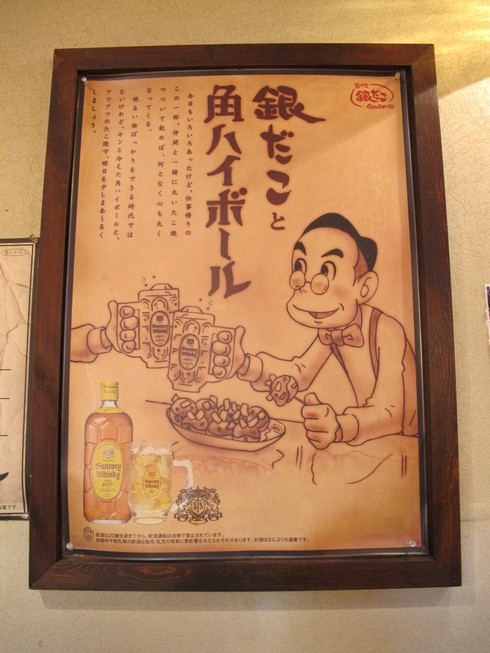 When they served us the Koku, it came with a lemon slice, served in a plastic mug. For the Yamazaki 10, they put it in a highball glass. And when we ordered a highball with Hakushu 10 they put it in the same glass with a tiny piece of mint on top. A nice little indicator that you've moved up in your drinking choice. 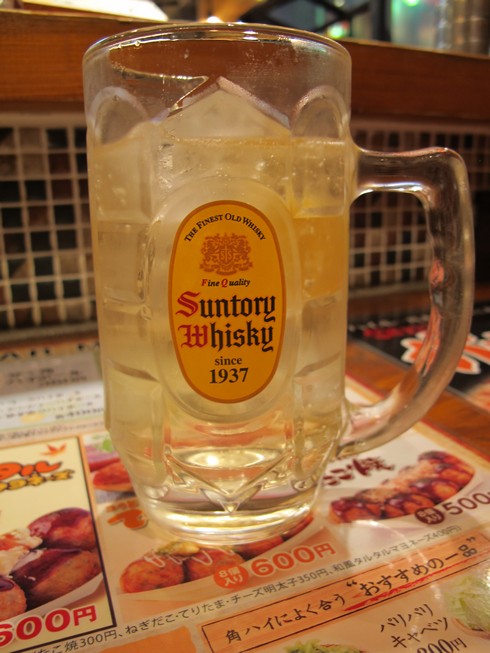 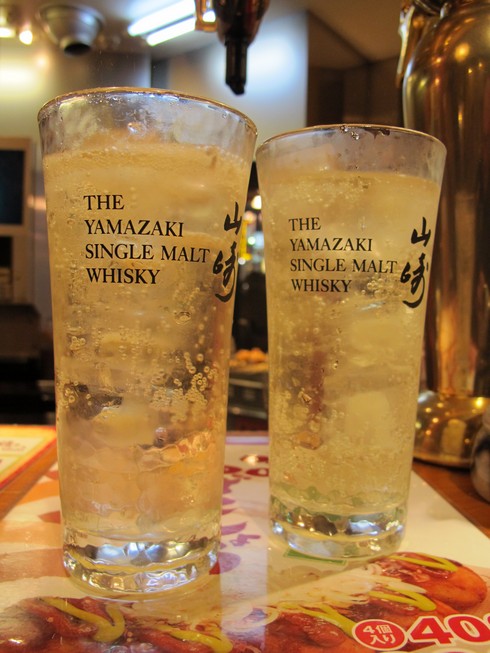 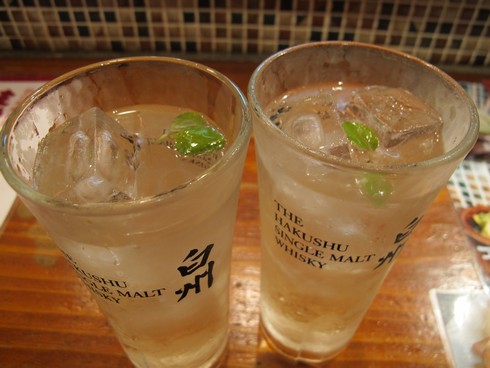 Marugine, my hosts tell me, is the most famous highball bar in Japan. It's what I would call 'regular bar' sized, but with all tall communal tables for standing and eating or drinking. 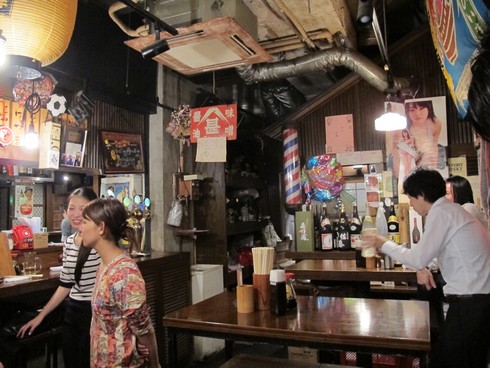 As this was my sixth bar of the evening, I am a little hazy about any other details. 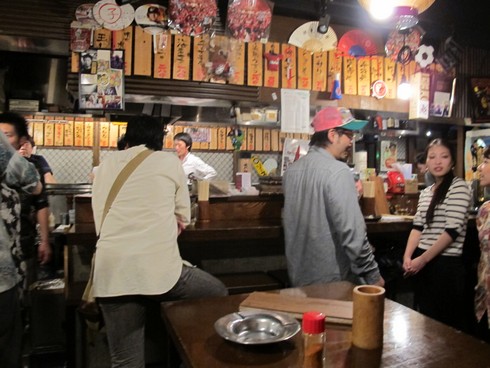 Fascinating. Are all highball bars standing? Do all standing bars feature highballs? Are highballs always whiskey and club soda? Always the same proportions? Always on the rocks? From what I've read the term 'highball' is defined much more rigidly there than it is in the USA. To Buffalo Trace's legendary master distiller Elmer T. Lee, a highball is Buffalo Trace bourbon and 7Up lemon-lime soda, rocks.

The highball is such a sensation that it seems you can get one anywhere- not sure if they're always made the same way but I believe 1:3 is the accepted ratio.

All of the bars my hosts called "highball bars" were standing bars.

All of the highballs were with soda water, yes. One or two places I visited had special highballs on the menu - a 'ginger highball' (some fresh ginger in it) and a 'rosemary highball' (sprig of rosemary) in particular. But it seems that a whisky highball is generally accepted as being with soda water.

Yes whisky highballs were always served on the rocks, except for at one bar where their signature serve was in a frosted glass without ice. Because it stood out it was clearly the exception.

You might also be interested in the Mizuwari highball ritual. I don't believe I witnessed that in Japan but it's certainly a vote for the highball being more rigorously defined:
http://www.finecooking.com/item/34065/japanese-whisky-and-a-drinking-ritual

Looks Cosy. I like the soft lights and the wood. Makes me wanna go

Great article. Want to visit "Gindaka" next time i go to Tokyo.

(Found this article by Googling for that Suntory mug btw)