On my five-day visit to Japan with Suntory whiskies I hit 21 bars by my count. I am talking about them in groups. Next up: Cocktail Bars.

The difference between the various styles of bars is subtle and I'm defining them as I see them. I'll be describing whisky bars, cocktail bars, highball and standing bars, and pubs/clubs/dives. Many cocktail bars look pretty much like whisky bars, since so many bars carry a massive amount of scotch.

Bar High Five is run by Japan's most famous bartender, Hidetsugu Ueno (Ueno-san). It was voted one of the world's 50 best bars. It's a tiny little place located in a building full of bars.

It only seats about a dozen people at the bar, plus there is an additional booth that can hold about eight more people. The mood inside was great - people complain about the formality of Japanese bartenders but I've found that when you're sitting at the bar it's fine to chat and laugh and have a good time with them.

Unfortunately we were only here for one drink as we were a large group at that point and didn't feel like we should hog the whole place. Someday I will be back for longer! 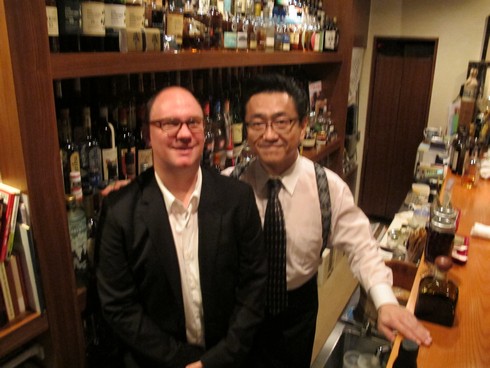 (At least Ueno-san looks good in this picture.)

Tender Bar is owned by Japan's other most famous bartender, Kazuo Uyeda (Uyeda-san). This bar is classy and weighty and feels expensive; the Pegu Club to High Five's PDT. 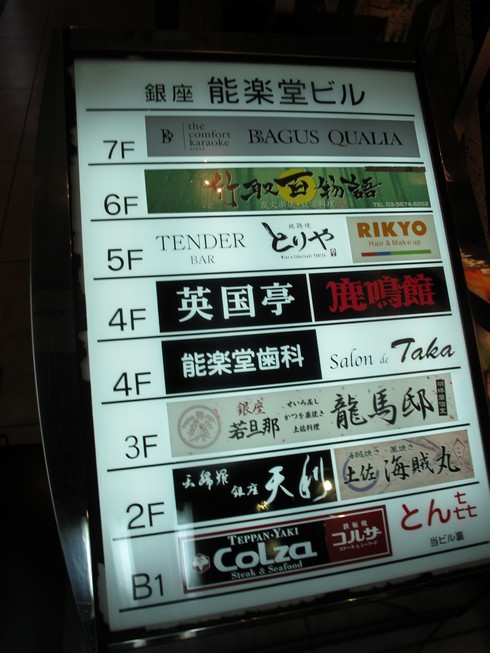 Though I was tempted to order Uyeda's famous Gimlet, I opted for a Jack Rose that came out dry, as opposed to my bar-mate's surprisingly delicious bitters-free Manhattan. 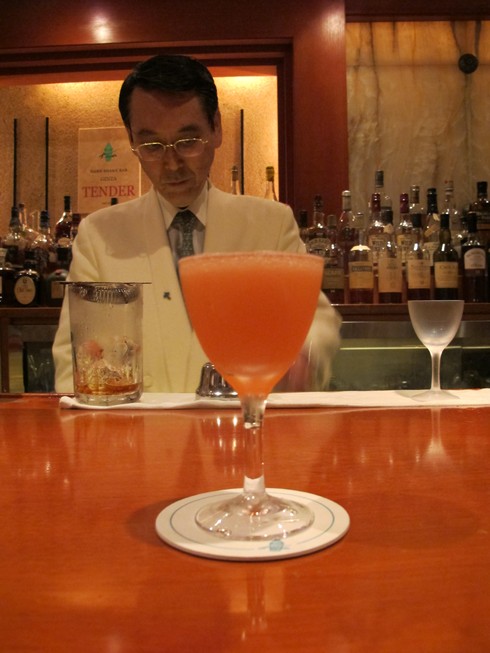 Uyeda-san's wife was our host for the evening and her English was quite good. I had met them both in New York for a 2-day seminar on Japanese bartending.

Bar Orange, near Shibuya in Tokyo, is a nearly-hidden downstairs cocktail bar. It's dedicated to the movie Clockwork Orange though you'd not call it a theme bar. It's very sleek and dark and I'd imagine attracts a stylish young crowd. The cocktails are served in gorgeous vintage-looking glasses. 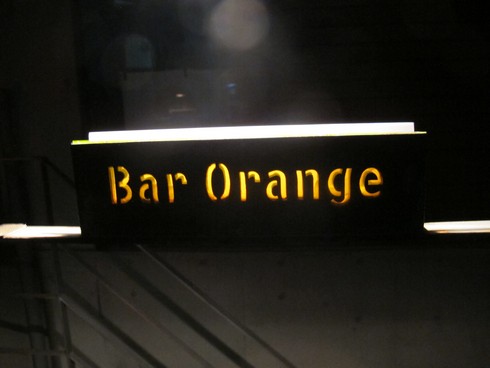 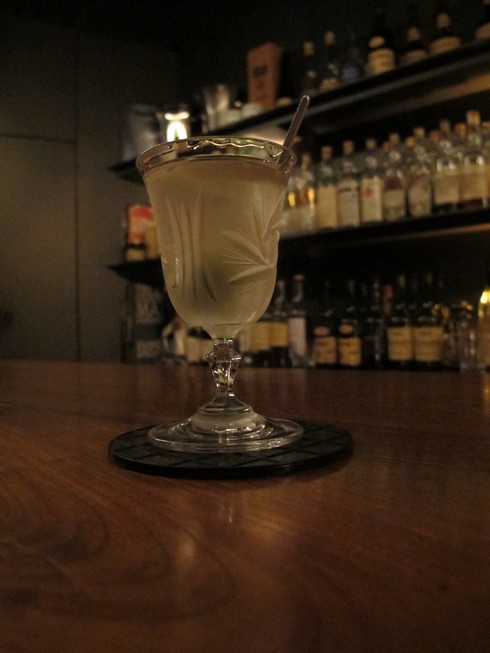 Ishi no hana was the most progressive bar we visited in Japan. It's run by bartender Shinobu Ishigaki, who won the Bacardi Grand Prix competition a few years ago with this drink: 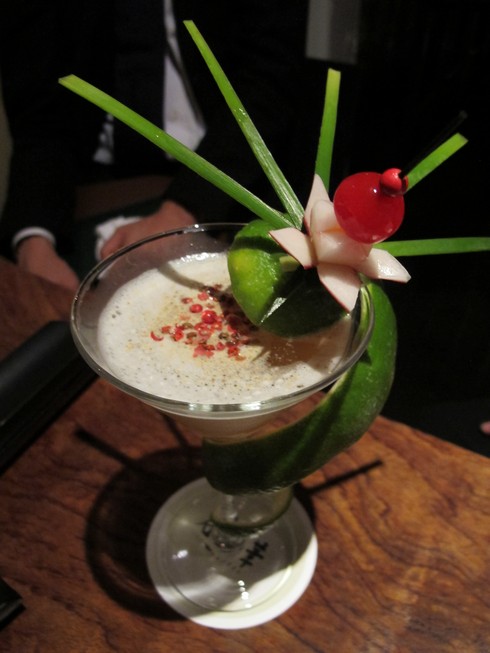 (That is some serious garnish.)

I had an Apple Vinegar Martini, while my bar companion had a Yellow Chartreuse Mojito. Other ingredients on the menu include rhubarb confit, jasmine, saffron syrup, and earl grey tea. 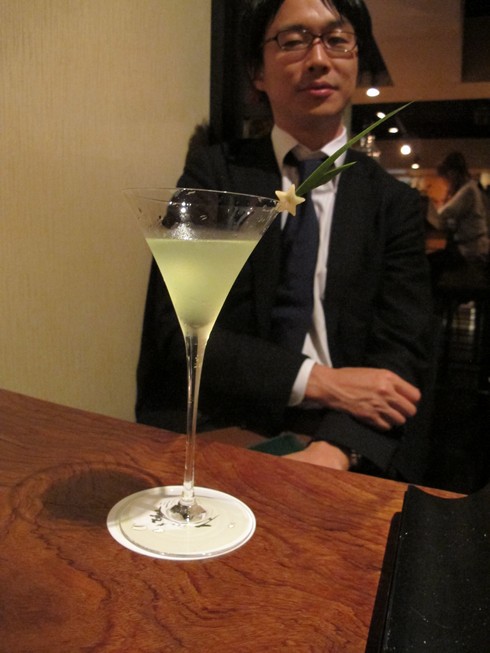 The bartender Shinobu Ishigaki even has his face on a can of a green tea beverage called calpis sour. 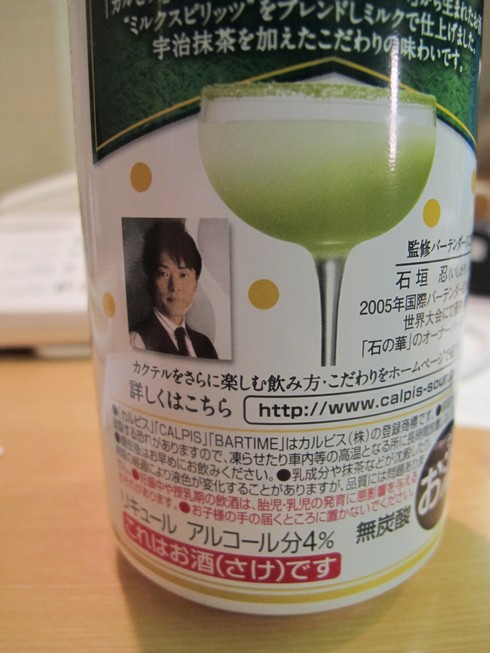 While the Ginza bars of Tender Bar, High Five, and Star Bar get all the glory, visitors to Tokyo should definitely put this one on their list.

I can't remember the name of it, but there used to be an anime series about bartenders in Japan. Each episode would feature a different cocktail or spirit, and so on. I'm sure I've got a few episodes on a CD somewhere...it's funny how they make animes and manga about anything over there.

Cool, I knew about the Drops of Gods about wine but not the bartender one.

It's actually just called "Bartender." It's a really fantastic mash-up of visual/narrative styles and techniques - like, part cooking show, part soap opera, part sitcom. I've got the series on a hard drive around here somewhere...

Actually, it seems to all be online right here

Sounds like a fun trip. I really enjoyed Bar Tender when I was there, although I wish I had more time to enjoy it. We just popped in quickly before our dinner reservation at the nearby (and fantastic) Sushi Sawada.

I too found it odd that the cocktail list just had names and no list of ingredients. I suppose it fosters discussion, but as an American I wasn't sure how it works, so I asked about a couple and ordered the first one that sounded interesting. But I was curious about the many names I didn't find out about.

They also did have a nice selection of Whiskeys, which I sampled for my 2nd and last drink there.

I'll definitely have to try some of the other ones you highlighted if I ever make it back there.

Star Bar was our stand-out in Tokyo—they indulged us for hours and seemed to enjoy it as much as we did. My camera had about 200 photos of ice on it the next day.

Something I love about these Japanese bars is that there is a good chance the man himself is going to make your drink. It was a much more personal experience than many US bars were someone dropped in to 'consult' on the cocktail menu and the staff changes over every few months.

don't forget about the TV drama "Bartender" http://asianmediawiki.com/Bartender_%28TV_Asahi-2011-J_Drama%29
Not sure if there is a subtitle version out.

I think that's the one mentioned in the comments above.

Actually, it seems to be a live-action adaptation of the anime. My mind is slightly blown.

I used your inisghtly post here as a guide last night in Tokyo.

Hit Tender, High Five and L'Essentiel last night. At Tender we had Ueda's undivided attention for quite a while. He expounded on his philosophy and approach. Ordered a Gimlet. He magically turned Gordon's gin into a refreshing zippy start to a great evening. At Bar High Five, Ueno was in Italy so we ordered some drinks from Kaori. Her Sidecar was good but not great. I should have ordered a Bamboo as she is a Sherry expert. L'Essentiel, the last bar we hit, is more of a Whisk(e)y bar. After three cocktails at Tender and High Five we enjoyed wine and food there.

Thanks for the update!