I know that several people are attempting bottle-fermented cocktails. Here's one program from Jeff Josenhans at the US Grant Hotel in San Diego that's about to come online.

THE US GRANT's award-winning Mixologist, Jeff Josenhans, has taken his mad-scientist cocktail crafting skills to a new level: straight to the basement of the hotel. After many hours of experimenting with various bottling processes, Josenhans is the first mixologist to successfully craft bottle conditioned cocktails combining the beer and champagne method of fermentation.

Launching as "Cocktails Sur Lie," (Sur lie is a French wine-making term that means having been rested on its yeast), he has combined the highly complex (and rarely attempted) process of the champagne method with the brewer's method, adding yeast to the bottle and allowing the bottle pressure to create carbonation, then spirits and sugar are mixed in according to the champagne method while the hopping process adds the brewer's flare.

A sneak preview of the Cocktails Sur Lie are currently on the week-long Autumn Mixology Dinner menu (names and ingredients below) but you'll soon be able to find the new flavors of 'Cocktails Sur Lie' on the Grant Grill's January cocktail menu. 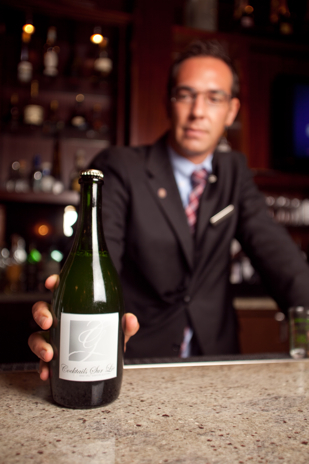 Hmm, good question. Home brewing is legal, and sometimes you can sell homebrew but I'm not sure what the conditions are. I seem to recall that a new law was passed to allow that.

i did this quite a few years ago when i was the bar manager at Dante. i had a cellar of over a hundred bottles going. we were hand disgorging and everything.

i think my coolest recipe was the saint germain wormwood soda which was a parody of the "bitter lemon". this was right around when saint germain came out.

i'd love to taste Josenhan's attempt. they read really well.

the method can be problematic for a quite a few reasons. you can end up with lots of yeasty aromas that are hard to eradicate and overshadow everything and some botanicals tend to produce lots of sulfur so your product ends up smelling like rotten eggs.

the holy grail for us was to take a chardonnay glass pour and turn it into a champagne. the aging process was too long unfortunately and we never were able to serve one side by side.

Very cool Stephen and thanks for the info! I was wondering about the yeasty flavors.