The 50 Best Bars in the World

I chose and polled most of the judges for this list of the 50 best bars in the world. It's the cover story for Drinks International, an industry magazine based in the UK. 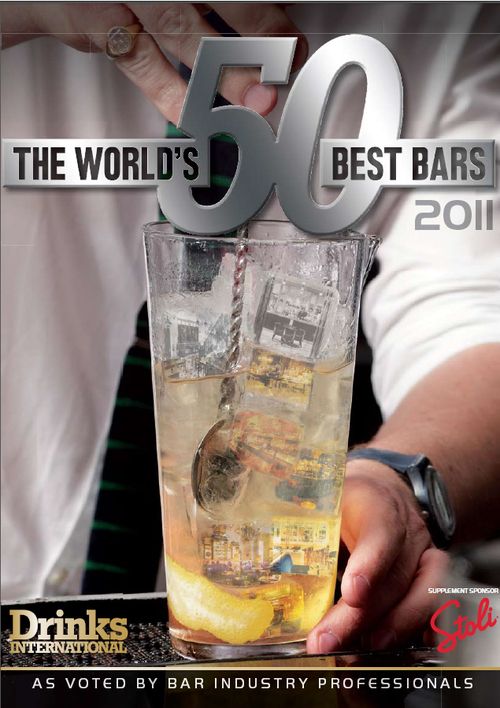 The rules were that the judges had to have visited the bar within the past two years and couldn't have a financial stake in them (so, no voting for your own bar). Each judge chose their top three bars and we averaged them together.

I think when you see the list of judges (not online yet) you'll agree that it's a very fair poll. For the most part the judges are people who travel extensively (so there are a lot of brand ambassadors), and we made an effort to include people in far flung places. These are people who have been to a lot of bars.

I have visited 29 of these bars, which is really good but still makes me feel inadequate. All of my top three picks made the list.

Now it's your turn: If you were the judge in this contest what would be your top three bars in the world?

The 2011 World’s 50 Best Bars list has been published, in partnership with sponsor Stolichnaya. This year, New York speakeasy PDT (Please Don’t Tell) took the top spot, with London hotel bars The Connaught and the Artesian in second and third place.
Back to New York for number 4 with Death & Co. A full list of the Top 50 can be seen below.

The poll was conducted by World’s 50 Best Bars editor Lucy Britner and US drinks writer Camper English. The pair canvassed around 100 bar professionals including the Playboy Club’s Salvatore Calabrese, King Cocktail Dale DeGroff, Esquire US’s David Wondrich and diamond ice-carver Hidetsugu Ueno. We believe this is the first time that the top names in the industry have come together to vote for their favourite bars – making it our most authoritative list to date.

These votes were coupled with global votes from 100 bars polled or featured in the 2010 list. Votes were received from every continent and bars in 16 countries made the top 50.

Lucy Britner said: “This year, voters have walked through phone booths and wardrobes, rung bells on unmarked doors and called to book appointments in order to file their nominations for the World’s 50 Best Bars. The list seems to pay homage to the speakeasy- style bar, which goes hand-in-hand with knowing how to create the classics, unearth old recipes and recreate forgotten ingredients.

“At the same time, voters are romanced by exquisitely decorated hotel bars that serve beautifully prepared drinks, made by immaculately turned-out bartenders.
The wealth of diversity and expertise in the bar scene makes this one of the most exciting lists to date.”

love to see the list of judges and where they live - way too many bars picked in NY and London.

A great list of bars created by a worthy list of those in-the-know. Having only been to 13, I share your sense of inadequacy. I would add Lebensstern and Rum Trader in Berlin as exceptional experiences worthy of this elite list.

I hope they put that online. There are a lot of US and UK judges but people from everywhere picked the bars in NY and London- as those are popular spots to travel to. We can't share the judges' individual choices but people tended not to pick all three of their bars in their own backyard.

Yes! I love me some Lebensstern.

Also, the bartenders and brand ambassadors who travel the most tend to live in NYC and London.

Hi, I'm quite surprised Tippling Club from Singapore made it to the list while Bugsy's and Hemingway Bar from Prague didn't. For service, cocktail selections and price those Prague bars mentioned would fare miles better. I'm saying this as a local in Singapore.

How do ANY of these qualify as best bars?

To say these are the best bars in the world is like comparing all the fruits of the world and then making a top 50 list without any classification of type. A wasted exercise, why bother? To make a list worth consulting, it would have to be divided into more logical categories like:
Hotel bars
Cocktail bars
Wine bars
Private members clubs
Restaurant bars
Traditional bars

I mean really, a list of best worldwide bars with no mention of any Irish bars? What the point? A good pub in Ireland is The Brazen Head (Dublin) or The Long Valley (Cork) Hotel bars will come and go, chasing trends and buying in "genuine" tradition but real bars are ones where the sheen on the furniture comes from the amount of people who have sat or danced or it.

If you are going to mention a Belfast bar, it would have to be Kelly's Cellars, the Crown Liquor Saloon or nothing at all.

These lists are always fraught with bias and other issues of composition, but this is a deeply flawed represention of San Francisco. Smuggler's definitely but Tommy's (huh?!) and Bar Agricole? Where is Alembic (probably should be in the top 10), Comstock, Bourbon & Branch, 15 Romolo? I live in NY, and all of the ones included are excellent, but must question 40% of the 50 best bars in the entire world being located only in NY and London. To mention just one which, in my opinion, should easily place in the top half of such a list, Franklin Mortgage and Investment Co. in Philadelphia.

By my count we had well-traveled judges in 20 different countries but I guess everyone has been through NYC and London while less have been through Philly and Wellington.

One thing those three SF bars have in common is that they're all influential outside of SF. That wasn't a criteria for judging but a common thread I noticed in some of the bars in SF and around the world.

Thanks for sharing this list. This is such a broad topic and there are so many ways to define best – drinks, decor, location, experience, price, etc. – I would be interested to see what criteria they gave to the judges to consider.

I’m a little disappointed nothing west of New York and Boston made it on the list because the US has great bars in Miami, LA, Chicago and remote places like Alaska, Denver, and the southwest – aka legitimate cowboy bars.

Thanks again for posting this.

Guys, this list is riddled with bias! The fact that not one Irish bar (a real one in Ireland and not the fake ones abroad) has made the list makes me really question the credibility of this list!!

The important thing to note is that this is an industry publication so it was a poll of industry people- bartenders, brand ambassadors, writers, a few brand owners. They'll have a different perspective than consumers. We asked them to celebrate great bars and great bar programs, which is probably not the same place as their favorite local joint.

The inclusion of Matterhorn in Wellington rather than Motel strikes me as a bit odd.

Matterhorn is a restaurant that happens to serve great drinks. Accordingly, the quality of the drinks is sometimes a little wanting.

Motel is a real bar.

Yeah there are a few restaurants, a lot of hotel bars, and even some clubby spaces on the list. I've only been to Motel Bar once but agreed it's great. As it takes time for people to travel around the world, the list can be more of a reflection of best bars of a year or so ago (though there are new ones like Worship Street Whistling Stop and Agricole there too). Furthermore I noticed that the list seems to favor importance and influence over what they're like right now.