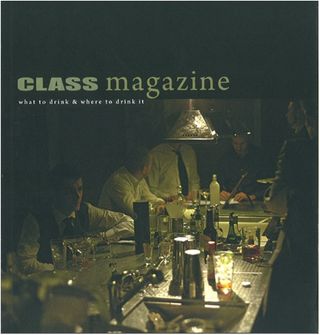 I love to read and am happy to contribute to CLASS Magazine and DiffordsGuide.com. They just announced a big lump of changes that will make it even more unique.

The print magazine will now be given out for free at many bars. Paid subscribers are going to get a single-spirit coffee table book (!!) quarterly along with the magazine.  And there will be a new industry-only section of the website.

Full details are below.

We thought people might stop subscribing to the paper magazine and we'd go totally digital, but we're selling more subscriptions to our print edition than ever. So rather than kill it, we've decided to rejuvenate our print publications and give something very special to our loyal subscribers around the world.

The print version of CLASS magazine will retain the same design ethos and irreverent editorial style (including the Page of Shame), but from issue #15 the content will focus on the world's greatest bars. Each quarterly issue will contain honest reviews and gorgeous photography of the very best bars in at least three of the world's most influential cities. In response to requests, we'll also be featuring the best liquor/wine stores in those cities.

An important change is that we are taking CLASS magazine directly to consumers. In accordance with our 'what to drink and where to drink it' ethos we'll be giving each of the bars and liquor/wine stores featured in CLASS magazine copies to hand out to their discerning drinkers.

So what will our loyal paying subscribers now get for their hard earned cash if others can pick up CLASS magazine for free? A full-on 300+ page collectible book with each quarterly print magazine, that's what. Yup, a door-stopper of a book every three months - each covering a specific drinks category in geeky depth with detailed distillery features, designed and photographed with our usual coffee table style. We've mapped out what's coming over the next year or so below.

Oh, and the weekly digital CLASS magazine? We will, of course, continue to release this every Tuesday afternoon for free, with a significant change. For bartenders and trade only, there will be a version we're calling 'Working CLASS', accessed through the soon-to-launch 'Bartender's Lounge' at diffordsguide.com - containing geeky articles, trade-related features, cocktail competitions and bartender interviews.

Our growing consumer readership will access CLASS magazine with content relevant to them through the main pages of diffordsguide.com.

* Very Special 'get the word out' Sub Offer

Subscription prices to print CLASS magazine will rise to help towards the cost of printing and mailing 4 magazines and 4 books per subscription year - rest assured we'll be holding the present price for existing subscribers who renew.

BUT we have a Special Offer for new subscribers. Subscribe before Friday 24 February and you'll receive 5 x diffordsguide books and 5 x CLASS magazines for ONLY £45 UK subscribers (£55 Europe / £70/$115 USA) INCLUDING diffordsguide Cocktails #10! Click here.

All our diffordsguide books will also be available from book retailers and selected liquor/wine stores, hardback cover price £28 / $45

CLASS magazine #16 - published end September 2012
The best bars and liquor/wine stores in two vodka capitals and one rather hotter city:

Hi Camper, I realize this is a really old post and you may not see this comment but I thought I would try. I'm one of the people who jumped at the chance to become a Class Magazine subscriber and get the 5 hardback books and 5 magazines. I do love the books I received: Cocktails #10 and Tequila Ambassador, but I didn't receive any of the other books. Just wondering if you or anyone you know subscribed and are in the same situation? I have contacted them multiple times but can't see to get anywhere. Thanks!

Hi - I'm sorry I don't know the answer to this one. I know they're good folks and I'd guess they have a plan in place but don't know what it is nor the schedule. My guess is that it's not a year schedule anymore but something longer. And if you get desperate, check out the prices the Tequila Ambassador is going for online….