Dushan Zaric, and owner of New York's Employees Only and Macao Trading Co., gave a talk at Tales of the Cocktail Vancouver about spirits that were made for mixing in cocktails. 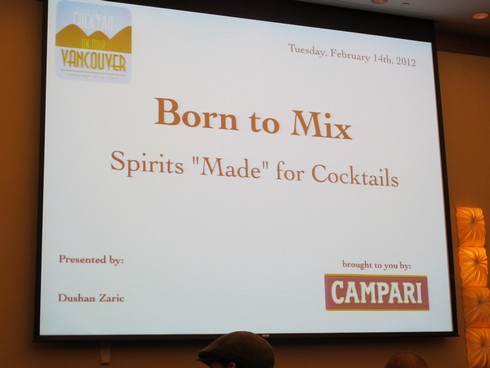 Zaric compared bartending to being a musician, using spirits as instruments and doing a ‘repetitive creative practice’ while making drinks behind the bar each night. He used the analogy in many ways, also noting that recipes are like reading music and can be performed differently by bartenders without deviating from what's written.

He noted that as brand materials are written by marketing departments, it's not okay to just go by what it says about a product on the bottle label. “You are not only a bartender, you are in charge of knowing everything there is to know about a spirit,” he said.

He noted a few thing to avoid in making cocktails:
1. One-dimensional taste
2. Two-dimensional taste- off balance, usually soft finish, low complexity
3. Overly complex taste – confuses the palate, too much going on. (I had a couple of these drinks while here in Vancouver.)

And he noted that the goal is to build a three diimsensoinal cocktail. The drink should have beginning middle and end in the mouth.

The he spoke about mixibility and quality in spirits. He noted for example that younger ryes are great for cocktails, while older ones are usually too woody for use- but they were made for sipping, not mixing. (And he said that producers make many spirits taste very woody as consumers associate that with quality, but that can be detrimental as far as the spirits' utility in cocktails.)

He next went through a few examples of how he might adjust cocktail recipes based on the base spirits used in them. For example, he'd use less Tanqueray gin in a Negroni than he would Plymouth gin, as Tanqueray is higher proof, and slightly more Herradura blanco tequila than El Tesoro in a Margarita. 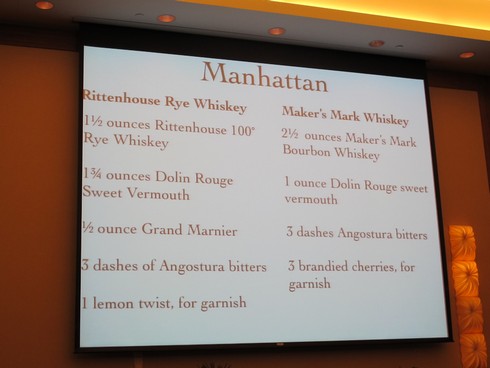 You can see the slides from the talk (that include the above mentioned recipes starting at slide 52, but probably not too much else useful information) on his Slideshare site here.

Audience questions at the end concerned how to help transition customers from basic vodka drinks to more complicated ones. One interesting suggestion was to do it with food- convince the Jack & Coke drinker to try a Manhattan by sending out a free appetizer of steak tartare to pair with it.

Other questions ranged from flavoring and smoothing agents in spirits, to some specific questions about operating Employees Only. People had good questions.

The seminar was sponsored by Campari, who also co-sponsored by trip to Tales. Thanks Campari!