The Science of Dilution

While at Tales of the Cocktail Vancouver, I attended the seminar on dilution by Audrey Saunders and Harold McGee. Saunders is the owner of the Pegu Club in New York and McGee is the author of the seminal work On Food and Cooking: The Science and Lore of the Kitchen 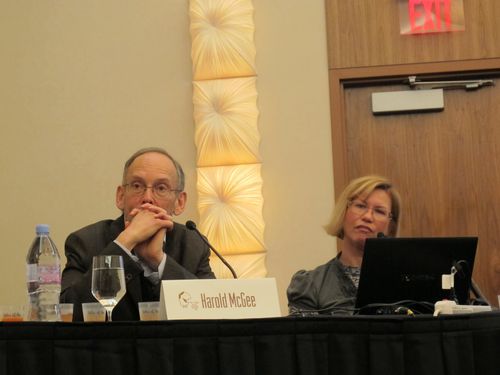 Part of the discussion was about why we get more aroma in weaker drinks rather than stronger ones. People add water to whisky and other spirits when nosing them to release aromatics, yet this is counter-intuitive: shouldn't the whisky on its own have a more intense flavor that a whisky with just water in it?

Other fun facts learned in the seminar:

Really interesting! I definitely noticed how salt affects the flavor profiles in cocktails like it does with pastry or other dishes in the kitchen. I'm more interested to see how other additives can enhance aromas as well.

Duggan McDonnell of Cantina uses a tiny pinch of salt in his simple syrups. Audrey said sugar has much less of a flavor-enhancing effect but it's still there. Carbon dioxide helps shoot those aroma particles into the air when its bubbles pop, but also effects the flavor of the drink. But it makes me wonder if a tiny float of soda water on top of some cocktails (juice ones?) would make them more exciting...

I'll admit to being a little unsure what the clusters have to do with it, when solubility alone seems like a sufficient explanation.