Where Irish Whiskey Really Is Really Made

In my story last week in the San Francisco Chronicle, I didn't get the chance to be as nerdy as I wanted to with the specifics of the three (and a half) distilleries in Ireland and which whiskies they make. So here are more details from an earlier draft of the story.

Jameson, which accounts for seventy percent of Irish whiskey sales in the US, is made at the Midleton distillery in Cork, in the south of Ireland, from a blend of column-distilled grain whiskey and triple distilled “pure pot still” (now called "single-pot still") whiskey.

“Pure Single pot still” in this case refers to distilling a blend of malted and unmalted barely. This came into practice in Ireland as a way to avoid taxes- malted barley was taxed but unmalted was not. Distillers often describe spirit from unmalted barley as “oilier” and “more citrus-spicy” than the spirit from malted barley that has more apples-and-pears fruity notes.

On the opposite end of the island in Northern Ireland is the Bushmills distillery, where the number-two selling brand in the US, Bushmills, is made. The company produces two blended whiskies, Bushmills Original and Black Bush, plus single-malt whiskies Bushmills 10, 16, and 21 year-olds.

The single-malt whiskey is pot-distilled from only malted barley (as is done in Scotland), as opposed to the malted/unmalted mixture found at Midleton. The column-distilled grain spirit used in Bushmills’ blends is actually purchased from Midleton.

The third best-selling Irish whiskey in the US is Tullamore Dew, which is a blend of column-distilled grain whiskey and pure single pot still whiskey from Midleton with single-malt whiskey from Bushmills. In addition to this blend, Tullamore Dew sells 10 and 12 year-old blended whiskies, plus a ten-year-old single-malt that is made at Ireland’s third distillery, Cooley.

Cooley, located north of Dublin, has boasted of being Ireland’s only independent distillery, but it was recently purchased by the Jim Beam company. Cooley operates both column and pot stills, plus the small nearby distillery Kilbeggan. Kilbeggan is also a whiskey brand that is largely produced at Cooley, though they also have a single-malt Kilbeggan Distillery Reserve produced entirely on-site.

At Cooley, pot still whiskey is distilled twice rather than the three times distillation of Bushmills and Jameson. Whiskies from Cooley include the peated (smoky) single-malt Connemara, Tyrconnell single-malt that is aged in a variety of casks, and Greenore, Ireland’s only single-grain whiskey, which is column-distilled from corn and aged in ex-bourbon casks.

Cooley also produces Concannon Irish Whiskey, launched this January, in partnership with Livermore Valley’s Concannon Vineyard. It is a blend of column distilled grain whiskey, pot-distilled single-malt whiskey aged for four years in ex-bourbon barrels, and some of that same malt aged for an additional four months in Concannon’s Petit Syrah casks.

Michael Collins whiskey offers both blended and single-malt bottlings, also made at Cooley.

Here's a handy diagram I just scribbled. Click to enlarge. 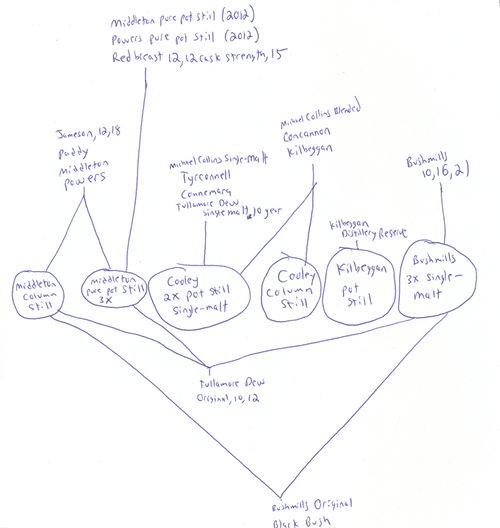 Now, this doesn't take into account how specifically these spirits are distilled, where they are aged, in what, and how they might be blended and finished, so the final flavor profile of Irish whiskey isn't as simple as all this. But I do think it's interesting to see how much Irish whiskey is born in so few places.

Love the diagram. You are the coolest.

What about Finnegan's Single Malt?

Nice Chart! Thanks for putting together.

john L and Finnegan's are both Cooley

Awesome info, thank you.
Do you know, or can you point me to where I can find out, where the grain comes from for each of the producers? I have many bad food sensitivities, and am wondering if any of them definitely do NOT use genetically modified grains. Organic would be fantastic, but I expect that's too much to hope for.
While Northern Ireland does not grow GMO crops, they import them - so technically Bushmills could still be GMO based.

To follow-up on my own question, https://westmeathwhiskeyworld.wordpress.com/2016/09/21/jamesons-whiskey-makers-series-at-midleton-distillery/ has a story by someone who had a tour of Midleton distillery ans says that Midleton uses only non-GMO barley and maize for its mash bill.

HI - Thanks for following up to your own question! When I visited Jim Beam many years ago, they had non-GMO whiskey aging in barrels just for Europe. I don't know if there is an anti-GMO law for spirits in the EU generally but that might be worth a google.