The American Whiskey Trail: History in the Making

A few weeks ago I traveled along the American Whiskey Trail, from Washginton DC to Tennessee to Kentucky. While I'll have a lot more to write about the whiskey distilleries I visited, here's a first story in CLASS Magazine about the rest of the trip: the historic sites, copper still makers, and cooperage. 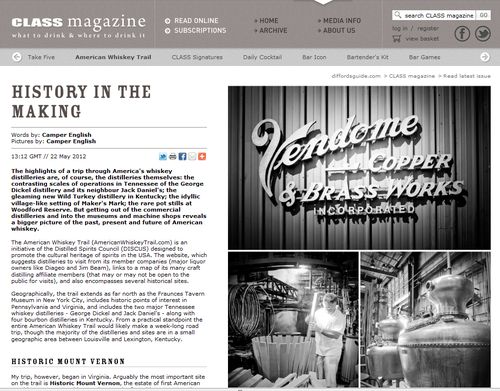 The highlights of a trip through America's whiskey distilleries are, of course, the distilleries themselves: the contrasting scales of operations in Tennessee of the George Dickel distillery and its neighbour Jack Daniel's; the gleaming new Wild Turkey distillery in Kentucky; the idyllic village-like setting of Maker's Mark; the rare pot stills at Woodford Reserve. But getting out of the commercial distilleries and into the museums and machine shops reveals a bigger picture of the past, present and future of American whiskey.

The American Whiskey Trail (AmericanWhiskeyTrail.com) is an initiative of the Distilled Spirits Council (DISCUS) designed to promote the cultural heritage of spirits in the USA. The website, which suggests distilleries to visit from its member companies (major liquor owners like Diageo and Jim Beam), links to a map of its many craft distilling affiliate members (that may or may not be open to the public for visits), and also encompasses several historical sites.

Geographically, the trail extends as far north as the Fraunces Tavern Museum in New York City, includes historic points of interest in Pennsylvania and Virginia, and includes the two major Tennessee whiskey distilleries - George Dickel and Jack Daniel's - along with four bourbon distilleries in Kentucky. From a practical standpoint the entire American Whiskey Trail would likely make a week-long road trip, though the majority of the distilleries and sites are in a small geographic area between Louisville and Lexington, Kentucky.

My trip, however, began in Virginia....

Read the rest of the story here.