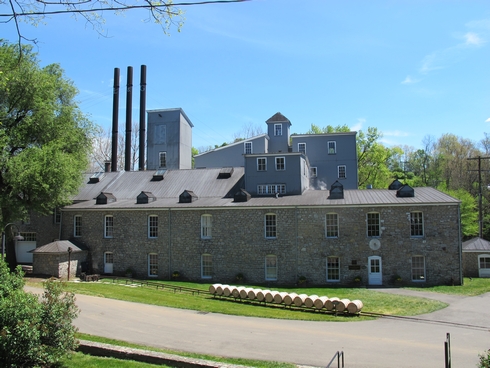 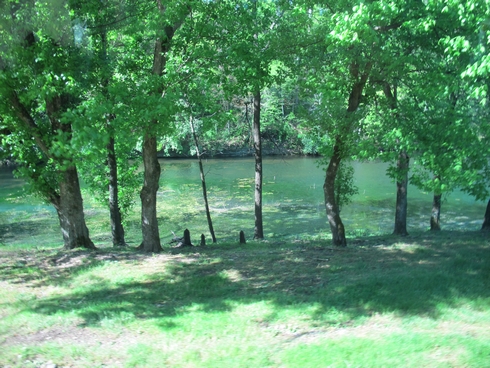 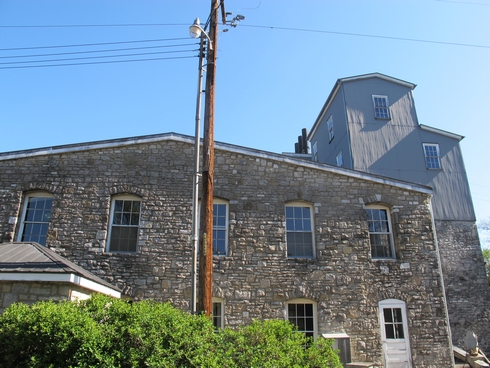 Woodford Reserve is made from a mashbill of 72% corn, 18% rye, and 10% malted barley. They use limestone-filtered well water to ferment the grains in Cyprus wood fermentation vats. They ferment for six days - quite a long time. The fermenting grains taste very sour, kind of like sour green beer. 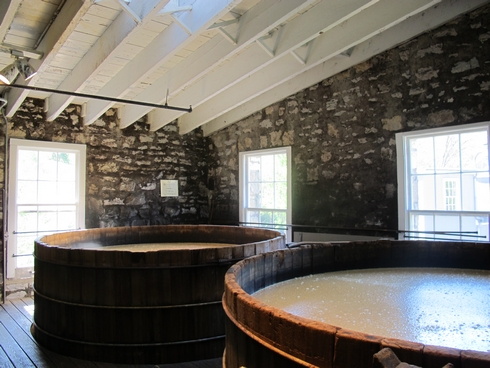 The sour mash process is where you take leftover grains that have been fermented back into the new batch of grains that are going to be fermented. Here at Woodford Reserve, they "sour in the cook" as opposed to souring in the fermenter. That means they add the last batch's spent grains to the new grains when it is being cooked, previous to when yeast is added for fermentation. Sour mash is known for keeping consistency between batches, but also it is acidic and helps reduce bacteria in the new batch.

Woodford Reserve is unique in that they make a portion of their whiskey in pot stills. The stills look much as they do in Scotland, but here there are three of them. In Scotland, after the grains have fermented they separate out the grain solids from the sugary beer and only distill the liquids. In bourbon, solids and liquids are put together into the column still. So at Woodford Reserve, they put solids and liquids into the first pot still and distill it only up to 20 percent alcohol. For the most part they are just separating out the solids in this step, taking care not to burn them into the inside of the still. 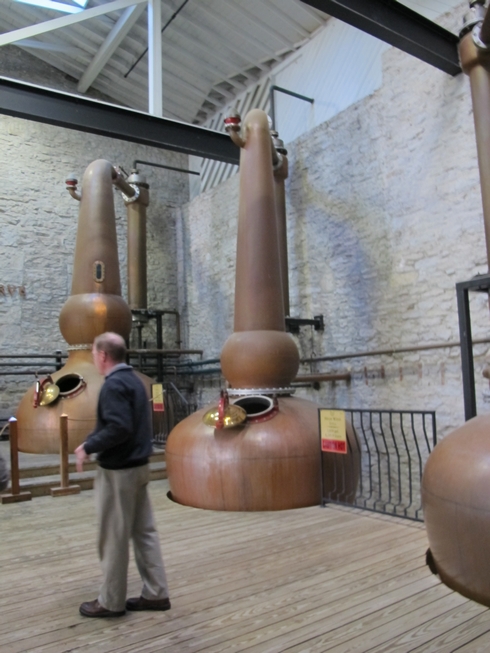 The second and third distillations bring the alcohol up to 55 percent and 78 percent (this is just under the legal limit of 80 percent maximum distillation percent for bourbon), and then it is put into barrels. The spirit goes into the barrels at 55 percent alcohol.

The rickhouses for the aging spirits are heated for Woodford Reserve. They put a temperature sensor in a barrel on the ground level. When it reaches 60 degrees Fahrenheit, they heat the warehouse until the spirit reaches 85 degrees and then turn off the heat. This makes for faster cycles of the spirit moving in and out of the barrel wood. 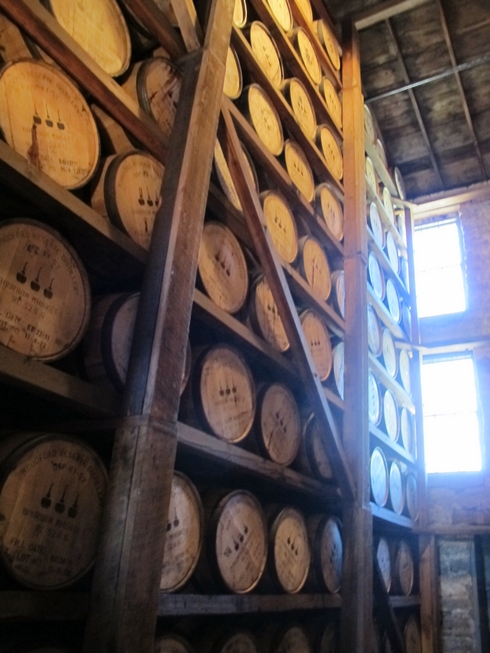 Woodford Reserve is aged for an average of 7.3 years, and when they take it out of the barrel, they've lost about 50% of the whiskey to evaporation.

After aging, the pot distilled spirit is blended with column distilled spirit (distilled elsewhere) to make the final bottling blend. They do not say at which ratio these two spirits are blended for the bottle (and they didn't mention the column spirit at all until it came up in conversation), but say that it changes depending on flavor. 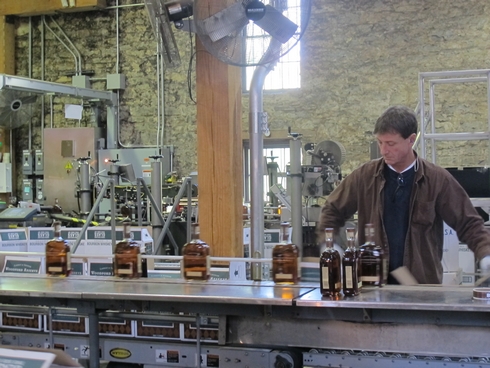 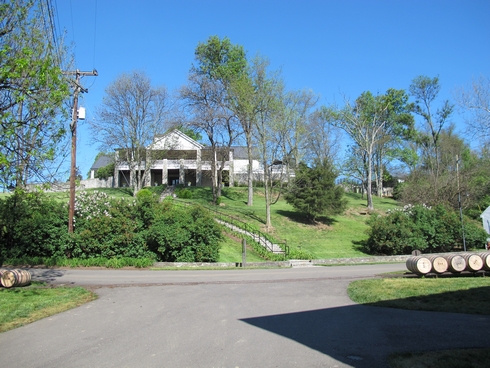 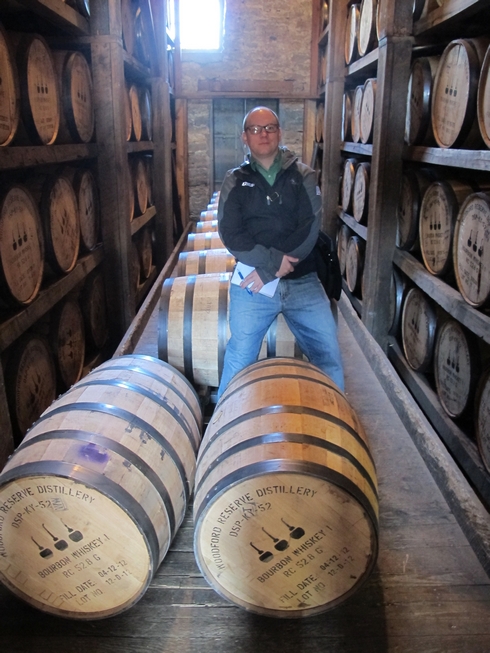 So is the column distilled spirit that they're adding to the pot stilled spirit a neutral grain or another Bourbon? Or would Woodford not release that information either?

The column still spirit would still have to meet the legal definition of bourbon. It would be cool to taste their column vs. pot spirit side-by-side sometime.

Yes, you can taste it. Column still bourbon used is called Old Forester bourbon. It is made at Brown-Forman's Early Times distillery. Pot spirit you can taste if you buy one of the Woodford's Master's Collection bourbons (noted that they have some sort of finish, oak seasoning etc).

I am disappointed that there is almost a deception with WR as they market their unique distillery & pot stilled whiskey as if was the full finished product for sale in the bottle. This type of deception is off putting for me, it shows a compromised integrity of the company & turns me off the product. I probably won't buy it again out of dignity.

I agree the 'final blending' is off-putting. I let my nose and tongue decide for me, and while I do like WR, I like others in the same price range more. To each their own!

Yep - I for one am totally cool with the taste and production of WR. This is a case I think not of deception - they don't claim 100% pot still anywhere- and more of focussing on the uniqueness of the product and as far as a distillery visit goes, not complicating the discussion. Heck, most excellent bourbons are all column still. Also this post was written 4 years ago and everyone is more detailed than everyone used to be thanks to nerds like us asking questions, so I'd not be surprised if column still is part of the discussion on every tour.