Buffalo Trace put out a press release that as part of their Experimental Collection series of whiskies, they declare their experiments aging whiskey in small barrels - 5, 10, and 15 gallon - to be a failure. They will not be released to the public.

After years of exposure to awful-tasting white whiskies, dozens of start-up brands of whisky aged in small barrels that taste of too much wood and not enough maturity, and other experimental products from major brands that were released even when I think they should not have been, I'm happy to see a press release about what didn't get thrown at the market. Experimentation is part of achieving success, and failure is part of experimentation.

And y'all know I've had a failure or two that I was happy to share here.

The press release is below the jump.

FRANKFORT, FRANKLIN COUNTY, KY (Aug. 22, 2012) Sometimes, not all experiments are successful. Buffalo Trace Distillery learned this the hard way with its small barrel experiments started in 2006.

Using 5, 10, and 15 gallon barrels, the company filled each small barrel with the same mash bill (Buffalo Trace Rye Bourbon Mash #1) around the same time, and aged them side by side in a  warehouse for six years.

The results were less than stellar.  Even though the barrels did age quickly, and picked up the deep color and smokiness from the char and wood, each bourbon yielded less wood sugars than typical from a 53 gallon barrel, resulting in no depth of flavor.

While Buffalo Trace is NOT releasing these experiments, the Distillery did feel it was important to release their findings. The company hopes others can learn from such an experiment, just as they have.

“As expected, the smaller 5 gallon barrel aged bourbon faster than the 15 gallon version. However, it’s as if they all bypassed a step in the aging process and just never gained that depth of flavor that we expect from our bourbons.  Even though these small barrels did not meet our expectations, we feel it’s important to explore and understand the differences between the use of various barrel sizes,” said Master Distiller Harlen Wheatley.

Each of the three small barrel bourbons were tasted annually to check on their maturation progress, then left alone to continue aging, hoping the taste would get better with time.  Finally, after six years, the team at Buffalo Trace concluded the barrels were not going to taste any better and decided to chalk up the experiment to a lesson learned.

“These barrels were just so smoky and dark, we just confirmed the taste was not going to improve.  The largest of the three barrels, the 15 gallon, tasted the best, but it still wasn’t what we would deem as meeting our quality standards.  But instead of just sweeping this experiment under the rug and not talking about it, we felt it was important to share what we learned, especially in light of the debate about usage of small barrels.  It’s one experiment we are not likely to repeat,” said Wheatley.

These small barrel experiments are part of the more than 1,500 experimental barrels of whiskey aging in the warehouses of Buffalo Trace Distillery. Each of these barrels has unique characteristics that differentiate it from all others. Some examples of these experiments include unique mash bills, type of wood and barrel toasts. In order to further increase the scope, flexibility and range of the experimental program, an entire micro distillery, named The Colonel E.H. Taylor, Jr. “OFC” Micro Distillery, complete with cookers, fermenting tanks and a state-of-the-art micro still has been constructed within Buffalo Trace Distillery. 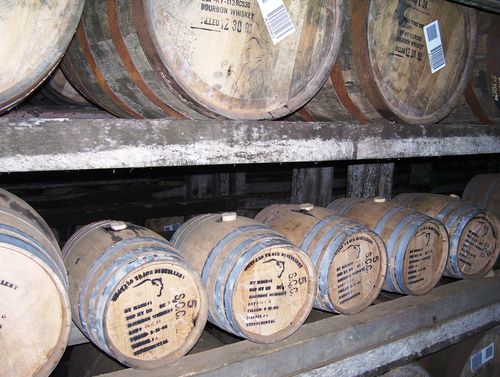 Admittedly they do have a certain incentive to release this kind of information as it pushes back against the micro-distillers claiming that small barrels can work wonders. If it gets more people buying bourbon from BT instead of Hudson or someone else, it was probably worth the bother.

Absolutely. And six years in a 5-gallon barrel, of course it would be gross. But if small barrels did work as well as big ones, you can bet they'd be aging in those!

I agree. And there are a few micros like Clear Creek who are patient enough to age in full-sized barrels for a few years to turn out excellent products.

Well said Jordan... I think it's funny BT feels threaten enough by micro-distilleries that they needed a press release on small barrels. I guess it means we are doing something right at the micro level.

Looks like BT has their hands full, or at least should have their hands full dealing with their mold problem. Perhaps thats why they forgot about their 5, 10 and 15g barrels for 6 years.

Camper, Id have to disagree. Using small barrels is EXTREMELY expensive, and not something a company with big shot CFOs like Brown-Forman, Heaven Hill, and Diageo would seriously consider. They have tight margins, and boards of shareholders to answer to. Increasing oak costs 10 fold would not go over well.

Oak costs would go up, but inventory costs would decrease radically. The only reason people use small barrels is to age the booze faster, to try to achieve 6 years of aging in under 2.