Filtration in Spirits: A Primer

For CLASS Magazine online at DiffordsGuide.com, I wrote an article about filtration in spirits. This was based on the research I did for my talk on the subject at the Manhattan Cocktail Classic earlier this year.

Nearly every spirit undergoes some sort of filtration, yet we rarely acknowledge it as part of production. But filtration makes vodka what it is today, practically defines Tennessee whiskey, is the standard in making white rum, and is changing the look of tequila. Filtration is important.

Generally speaking, filtration refers to the mechanical process of passing a liquid or gas through a medium that keeps out solids of a certain size. But in spirits, we include carbon filtration (sometimes called carbon treatment) as filtration too. Carbon filtration works differently: by absorption, the adhesion of particles to a surface, like flypaper.

I researched filtration in spirits for a talk at this year's Manhattan Cocktail Classic. While I can't claim category-wide or hands-on expertise in this matter, I spoke with several industry sources who know their stuff. Consider this an introduction to the subject.

The article covers filtration in vodka, rum, tequila, whisk(e)y, and cognac. I hope you'll find it interesting. Get the full story here. 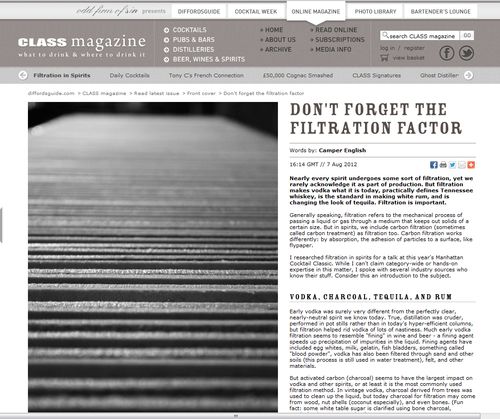 Update: The story came off the site, so here it is in its entirety:

Nearly every spirit undergoes some sort of filtration, yet we rarely acknowledge it as part of production. But filtration makes vodka what it is today, practically defines Tennessee whiskey, is the standard in making white rum, and is changing the look of tequila. Filtration is important.

Generally speaking, filtration refers to the mechanical process of passing a liquid or gas through a medium that keeps out solids of a certain size. (Think of a screen door.) But in spirits, we include carbon filtration (sometimes called carbon treatment) as filtration too. Carbon filtration works differently: By adsorption, the adhesion of particles to a surface. (Think of flypaper.)

I researched filtration in spirits for a talk at the Manhattan Cocktail Classic in May 2012. While I can’t claim category-wide or hands-on expertise in this matter, I spoke with several industry sources who know their stuff. Consider this an introduction to the subject.

Early vodka was surely very different from the perfectly clear, nearly-neutral spirit we know today. True, distillation was cruder, performed in pot stills rather than in today’s hyper-efficient columns, but filtration helped rid vodka of lots of nastiness. Much early vodka filtration seems to resemble “fining” in wine and beer – a fining agent speeds up precipitation of impurities in the liquid. Fining agents have included egg whites, milk, gelatin, fish bladders, something called “blood powder.” Vodka has also been filtered through sand and other soils (this process is still used in water treatment), felt, and other materials.

But activated carbon (charcoal) seems to have the largest impact on vodka and other spirits, or at least it is the most commonly used filtration method. In vintage vodka, charcoal derived from trees was used to clean up the liquid, but today charcoal for filtration may come from wood, nut shells (coconut especially), and even bones. (Fun fact: some white table sugar is clarified using bone charcoal, rendering it non-vegetarian.)

Vodkas today advertise a range of other material to complement the carbon. These include birch charcoal, quartz sand, and algae (Ladoga), Herkimer Diamonds (Crystal Head), freeze filtration, Z-carbon filter, and silver (Stoli Elit), Platinum (Platinka), Gold (Lithuanian), Lava Rock (Hawaiian, Reyka), and marble (Akvinta). Though many of these methods sound like pure marketing, in fact some of these precious materials like platinum and silver do improve filtration efficiency. (For very detailed information on some vodka filtration technologies, this site http://www.vodka-tf.com/ is quite a read.)

Charcoal filtering is also commonly used in tequila. According to one tequila producer, this is because the law for tequila production (the NOM) specifies amounts of impurities like esters and furfural that may be present in tequila, and these numbers are difficult to consistency hit with distillation alone. Thus, charcoal filtration cleans up the impurities in tequila a little bit – but also removes some flavor with it.

Charcoal filtration can remove color as well as flavor and impurities. Many ‘white’ rums are aged a year or more in ex-bourbon barrels, and then filtered for clarity. Charcoal filtration (and other new-at-the-time technologies such as aging and column distillation) helped make Bacardi the popular and later global brand of rum that it is today. This lighter, clear style of rum born, in Cuba, is often called the ‘international style’ that won out in popularity over regional production methods.

All charcoal isn’t created the same, however. Should you take a dark rum and run it through a water filter repeatedly, you may not lose any color. (I tried.) Some parameters that distillers investigate in choosing the right carbon filtration material include the base material (bone, nut charcoal, wood, etc), the “iodine number” and the “molasses number,” the latter a measurement of decolorization. Activated carbon meant for cleaning up water may not be of any use in stripping color from liquids.

Decolorization has allowed for a new trend in tequila: aged tequila filtered to clarity. Probably the first tequila to do so was Maestro Dobel, a blend of reposado, anejo, and extra-anejo tequila filtered to near-clarity. In recent months, new brands have followed suit, including Casa Dragones (blanco and anejo mixed together and clarified), Milagro Unico (blanco with ‘aged reserves’), and Don Julio 70th Anniversary Anejo Claro (clarified anejo). In the opposite direction, the first tequila that I’ve seen labeled as ‘unfiltered,’ a special cask-strength bottling of Ocho, has also just hit the market.

In both scotch and in bourbon, there is an increasing trend toward unfiltered whiskey, while chill filtration is still very much the norm. Chill filtration prevents cloudiness in spirits (particularly at low temperatures) and precipitation of particulates in the bottle. It is purely an aesthetic choice, not meant to affect the flavor of the spirit. However, many experts argue that it does alter (flatten) the flavor to some extent. (For a very nerdy analysis of chill filtration, we refer you to this information from Bruichladdich http://www.bruichladdich.com/library/bruichladdichs-guide-to-chill-filtration.)

As far as I have been able to learn, in chill filtration activated carbon is not used. The spirit is chilled to a certain degree, and then a cellulose or other paper filter is used to remove the esters and fatty acids that are less soluble at low temperatures. Whiskies bottled at higher proofs tend not to cloud, so many cask-strength whiskies and many (if not most) whiskies bottled at 46 percent alcohol or higher are non-chill filtered. Outside the bottle, however, when ice or water is added and they dilute, they may get cloudy.

Tennessee whiskey has its own style of filtration. After the spirit is distilled but before it goes into the barrel for aging, the whiskey is dripped through or soaked in tubs with about ten feet of charcoal made from sugar maple trees. Contrary to popular opinion, this is in no way required by law, but both Jack Daniel’s and George Dickel employ this technique. Gentlemen Jack is unusual in that it undergoes charcoal filtration a second time before bottling.

One cognac distiller revealed that filtration in cognac is also standard: cognac is run through paper filters of a specific (depending on the product) pore size to filter out undesired molecules. While most cognac is not chill-filtered, one producer said that when bottles are destined for cold-weather countries (cognac is popular in Scandinavia), it is often chill-filtered to prevent cloudiness in the bottle. It might be interesting to taste chill and non-chill filtered versions of the same cognac. The opportunity is rarely, if ever, afforded in scotch.

So, some form of filtration is used in about every type of spirit, whether that’s to change the color, clean up undesired impurities or clean out off flavors, to prevent cloudiness, or just to keep out chunks of stuff from floating in your bottle. As with the water used in fermentation, the type of still, and the location/condition of aging barrels, filtration is an important part of the process of making spirits and shouldn’t be so often overlooked.

Nice job--I left a comment over at the Class site.