A Few Things Learned in the Agave Fields in Mexico

On my recent trip with the Tahona Society, we visited took ATVs into the agave fields and "helped" harvest some agave. 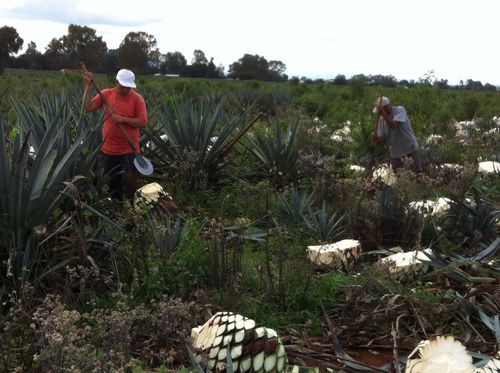 There, Olmeca Altos tequila Master Distiller Jesus Hernandez filled me in on some details about agave I didn't know, so I thought I'd share them:

I also learned something from Guillermo Sauza, distiller/owner of Fortaleza Tequila. 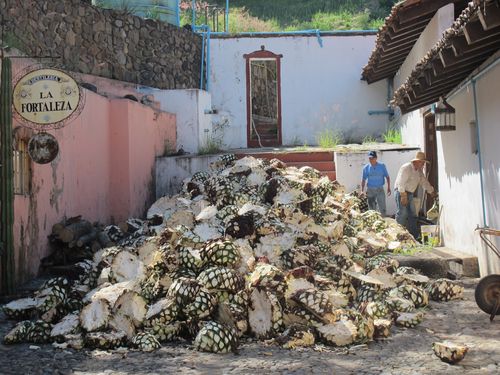 Good information and useful to me

How does one differentiate a male agave from a female agave

Why does the phenomenon of a male plant not sporting a quiote happen?

Hello - I think I see where the confusion arises, and I think it's because I was unclear in my writing. I believe what I meant to write was "Only the male plants, WHICH do not sprout quiotes, have a cogollo."

In other words I think I was saying (this was 5 years ago) was that females have quiotes and males have cogollos. However due to the time passed I am not sure of this, and recommend that you find another source to verify it.

If you find one please comment again! Apologies for the confusion.

From when the blue agave is 3 years old it clones rhizomatic offshoots (baby agaves) known as hijuelos (or pups) or matecuates which are typically harvested after around a year of growing around the parent. These are dried , cleaned of and dead leaves and taken by the avagero to be transplanted in neat (spaced out) rows in the fields where they will prosper and grow into mature agaves attempting to sexually reproduce by growing a quiote (flowering stalk) when they approach maturity (or botanical puberty). Hijuelos produced after an agave is around 6 years are not transplanted as they are considered to weak (parent is not as virile for asexual reproduction) for replanting. Anyways hijuelos whether replanted or not are cleared away as they use nourishment from the parent which needs to be avoided for healthier development of the adult (parent)

Regarding male and female, i would think the words should be used with inverted commas as 'males' and 'female' agaves since technically they cannot be male and female (in the biological sense) as agaves are monecious in nature (male and female parts exist on the flowers) so i believe, the reference to males is a local and colloquial way of expressing mature agaves that have not sprouted the quite and female for those that have sprouted the quiote and had it castrated (to conserve the sap). Eventually, all agaves will sprout the quiote if not harvested. The jimadore will decide on harvesting the heart based on the sugar level reading taken by field refractometers and the visual appearance of the agave (reddish brown when mature).