I finally secured permission to print the cocktail menu of 28 HongKong Street in Singapore. The bar program there is run by Michael Callahan, formerly of San Francisco.

The menu has a couple of shout-outs: one to Steven Liles of Smuggler's Cove, and another to me(!) for supercharged Aperol. I think this is the first time with my name on a cocktail menu, so I'm psyched. 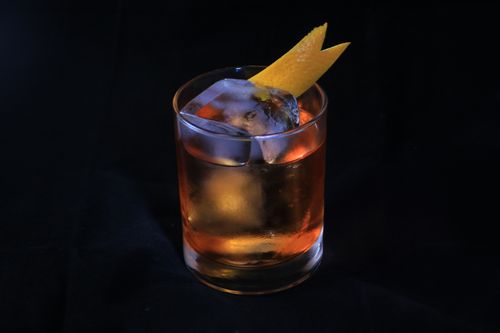 
Callahan makes the Aperol variation a little bit differently than I did: mine was high-proof Aperol. His is double-flavored: He dehydrates a bottle of Aperol and adds the resulting sugar to another bottle of Aperol.

Anyway, tons of good stuff here: I can't wait to return to Singapore and visit the bar in person.


BARREL-AGED GOODNESS
only at 28. these gems are hand-blended and then aged
with oak right here. limited supply, so rationing applies.

Double Barreled Martinez
$25 · Unknown · 1860's ·
Father of the Martini? When it's this tasty,
does it really matter? We went extra old
school with Bols barrel aged genvever,
added the standard fixins, and let it rest.

RUM ROULETTE
rapturous rums showcased in the venerable old fashioned.
you pick the lady and we’ll doll her up the way you like.

SMASHBOX
a fresh and tarty little sister of the mint julep,
the smash is a beauty with all kinds of spirit.

THE FOUNTAIN
prohibition was the dark age for bartenders in america, but
a new industry was eager to give them a home. let's get fizzy.

Golden Fizz
$21 · Jerry Thomas · 1862 ·
Hayman’s old tom gin, lemon, simple,
orange flower water, egg yolk, soda, and
orange zest. In your journey through the
world of fizzes, you have had the Silver,
now try the Golden. Next stop Diamond!
Ramos Creole Cocktail
$22 · New Orleans · Mid-1800's ·
Russell’s Reserve 6 year rye, house-made
Curaçao bitters, creole and Angostura
bitters, absinthe, sugar, water, and love.
An unjustly forgotten rival of the Sazerac.
Hard to get right, but worth it.
Prof. Marshall's Daisy
$19 · Unknown · Late-1800’s ·
Orange-peel Scotch, three fresh-squeezed
citruses, a touch of grenadine, and soda.
Named for a man who drives fast cars
in skirts, this dandy of a daisy is tall,
refreshing, and goes down with ease.
Rosita Cocktail
$23 · Unknown · 1900's ·
Sino reposado tequila, Sombra mezcal,
sweet and dry vermouths, and Camper's
supercharged Aperol made inhouse. This
gal is a bitter lover with lots of depth.
Negroni lovers, meet your next fling.
Painkiller
$20 · British Virgin Islands · 1971 ·
Steven Liles makes it best, but damn, we
try. This easy drinker has been a tabloid
darling of late. Rum, pineapple, orange,
coconut cream, nutmeg, and a lawsuit.
Sherry Shrub Cobbler
$19 · Colonial America · 1800's ·
Amontillado sherry, 72-hour housemade
shrub, and fresh-squeezed OJ. A staple
tipple at any tavern in its day. Some will
modernize it. I'm going with,
"If it aint broke, why fix it?"
Manuka Bees knees
$18 · Prohibition America · 1920's ·
Ok, so I tinkered with this one a bit...
Beefeater gin, lemon and Manuka honey
syrup. The official cocktail of the flapper
generation. A drink you can't help but
love.


NEW KIDS ON THE BLOCK

Whore’s Bath
$22 · 2010 ·
She’s made a few rounds and won a few
contests. A quick rinse and she’s ready
to go again. Manuka honey vodka,
umeshu, poire william liqueur, lemon, and
Hawaiian lava salt pickled ginger.
Beginner’s Luck
$23 · 2012 ·
28‘s own Vanessa’s amazing showcase for
the lost joy of gomme! Tito’s ever-lovin’
vodka, bourbon, housemade Earl Grey
& basil gomme, and lemon. OMG, soooo
good. One for you cocktail geeks.
Joiner Fee
$20 · 2011 ·
Armed with Wrey & Nephew overproof
rum, this funky little island dweller is
ready for adventure. A mod homage to
Tiki, this drink refuses to take is self
seriously… but you should!
Hard to Port
$21 · 2012 ·
A time-consuming drink to make, but a
dockworkers delight. Housemade porter
beer reduction, rye whiskey, lemon, egg
white, and allspice dram, embittered by
“28”. It's worth the wait!
Modest Mule
$18 · 2010 ·
A variation of a variation that is so
popular... this damn drink will never leave
me alone. Lemongrass-soothed 42 Below
vodka, ginger beer, lime, rosemary, and a
Branca Menta pipette to keep it cool.
The Cottontail
$19 · 2012 ·
Bulleit bourbon, fresh carrot juice,
grilled-peach marmalade, ginger beer,
celery bitters, served long and tall for the
bunnies. Because I never did care for duck
hunting season.
Border Wars
$22 · 2012 ·
Bulleit bourbon, Sombra Mezcal,
awesome apricot brandy, a lil' latin
sumpin', & cherry-bark bitters, served
strong and straight. With flavors that go
on and on, it's heaps of history in a glass.
The Gateway
$23 · 2012 ·
Square One Botanical vodka, Cocchi
Americano, cardamom bitters, and orange
bitters. A vodka drink for gin drinkers, or
a gin drink for vodka drinkers? Beware
what’s on the other side of the door.

300 of the tastiest bottles of artisanal spirits anywhere.
Pick Your Poison
$15 to $500
House-standard 45ml pours from our
far from standard spirits lineup. Neat,
cracked, or with a side of remarkably
fancy ice. Check the hall longboard for
options or ask the staff for counsel.
Mini Master Class
m.p.
You'll find a unicorn before you'll find
Michael with free time, but plan ahead,
be sweet, and he might just hold an
hour-long class on a cocktail or spirits
topic of your choice! Six guests max.

You posted this on my birthday!!!! Well if that's not a present I don't know what is. Thanks for the luv!!! Hurry over, the scene is explosive in this neck of the woods!!

Nice. One of my favourite places to be. Try the 'Gateway' - Best drink I've had in a long time. Great bar.

Just went here about a month ago. This is simply one of the best bars in the world.

I'm coming back for that Ramos Creole :)