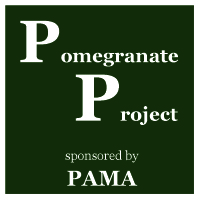 What the heck is a pomegranate?

The name "pomegranate" comes from two Latin words for "seeded" and "apple", which makes a lot of sense, given that a pomegranate looks like and apple and is full of seeds. (Fun fact: The word "grenade" was inspired by the pomegranate.)

The pomegranate fruit grows on a small tree or shrub. The tree is native to the area of Persia in the Middle East, but it is now grown further abroad, including in California and Arizona.

The interior seeds are surrounded by spongy pulp, and the mess of them together makes the pomegranate particularly difficult to work with. 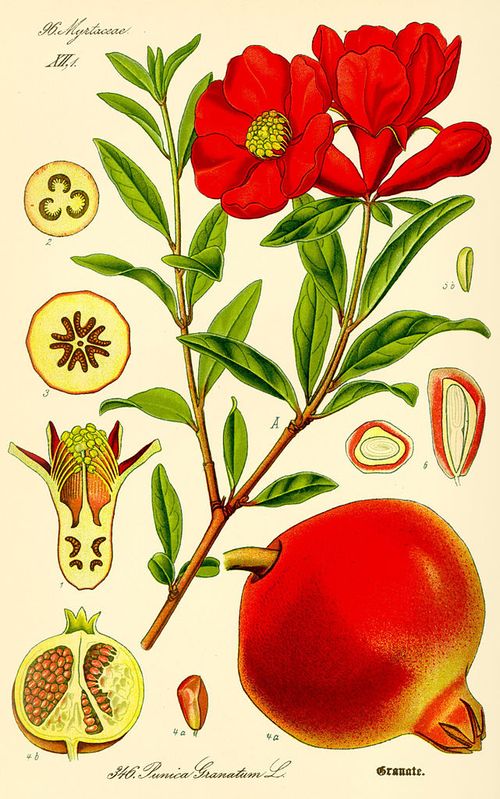 
Pomegranate juice became popular in the US after 2000, but of course has been around a long time.

Pomegranates in the West

Pomegranates were introduced into California by Spanish settlers in 1769. [source]

According to the 1917 book The Pomegranate, we learn a bit more.

After Cortez conquered Mexico in 1521 the Jesuit padres soon began their missionary work among the Indians With them they brought the fruits of France and Spain and among these the pomegranate.

All the fruits from the older missions in Mexico were carried northward and planted in the new mission gardens in California In these gardens may still be seen some of the old olive and date trees and pomegranate bushes. In 1792 Vancouver found an orchard at Mission San Buena Ventura in which pomegranates were growing together with apples pears plums figs oranges grapes and peaches. Robinson mentions an orchard of pomegranates at the Mission San Gabriel.

The type of pomegranate grown at these missions is of a mongrel seedling origin but is of fair quality and well liked by many people. It has a rather wide distribution. Since 1850 many new varieties have been introduced some by way of the southern states principally Florida and Georgia but mainly from the Mediterranean countries and China. Until recently most of the plantings in California have been seedlings or cuttings taken indiscriminately. The number of different forms now growing in the state is therefore large and varied and furnishes excellent material for the selection of better commercial varieties. Several superior varieties have appeared and are now being propagated. The most promising of these is the Wonderful which is the only pomegranate now being grown commercially in California.

Although the exact date of the introduction of the pomegranate into the eastern United States is not known it is probable that it was taken along with the orange and other fruits to Florida at an early date. However it was not until the middle of the nineteenth century that attention was directed to the culture of this fruit in the south. At that time varieties from California and southern Europe were introduced and a few plantings made chiefly as garden and door yard trees. However pomegranate growing has never become a commercial industry although the shrub is now quite common throughout the southern states. Some very good varieties are found but little attempt has been made at developing a market for the fruit and it is principally grown for home use. Pomegranate plants will grow as far north as Washington DC but they will seldom mature fruit farther north than eastern North Carolina and at that latitude fruiting is quite uncertain. 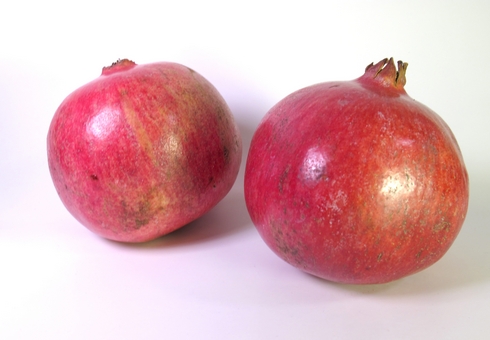 I was going to post here a few notes about the history of grenadine in cocktails, but then I started sorting through my cocktail books and I'm trying to figure it out still. More to come!

I look forward to your grenadine story, it's a bit of history I've often pondered. We seem to use grenadine is such small amounts in modern cocktails, it's often hard to see its utility. Thanks for pursuing this.