The Cocktails of Lolinda from Best to Worst

Chris Lane, formerly of Heaven's Dog and Wo Hing General Store, took over the bar manager position at Lolinda in San Francisco in December. (The original menu was done by Lane Ford.) Lolinda is a large, modern steakhouse owned by the same folks who brought us Beretta, Starbelly, and Delarosa.

The cocktail menu is split between eight original cocktails (six of them Lane's) and nine classics including the Negroni and Americano. This is Lane's first full menu.

Lane says his directive with the menu was to make the drinks as boldly flavored, modern versions of steakhouse cocktails. Most of them are quite spirit-forward, and on average the drinks are dark brown or yellow in color.

I found them to be food-friendly yet not food-dependent. You can definitely just have a drink and grab a snack, like the delicious smoked artichoke. 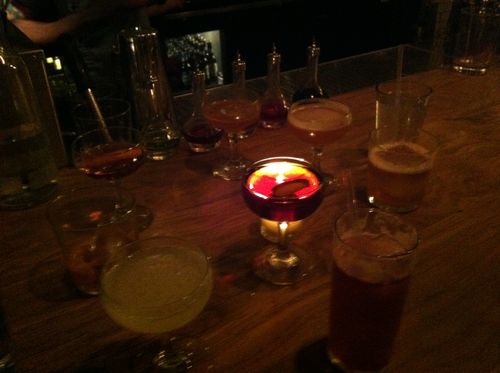 Modern Cocktails of Lolinda, From Best to Worst

This drink owes its magnificence to the choice of brandy - Marie Duffau Armagnac. It's a little funky and wild, with so much character it carries through over the other ingredients. The chocolate notes of the sherry seem to grow in intensity as the drink slowly melts on the big ice cube. This drink hits it out of the park.

Robust, delicious, surprisingly exciting, and smoky, this cocktail tastes like the cigarette after sex, and also the sex. It should definitely be your last drink of the evening, as it's rich enough to accompany or replace dessert.
3. Flor de Jerez  amontillado sherry, jamaican rum, lemon, apricot, bitters,
served on the stem.  by joaquin simo
One of just two drinks on the menu not designed by Lane, the Flor De Jerez is credited to Joaquin Simo (Death & Co., Pouring Ribbons). The drink is juicy and citrusy and delicious and fairly low in alcohol and a joy to sip. There are more novice-friendly cocktails on the menu, but I'd recommend this to your cocktail-shy friends.
4. Cloak and Dagger   reposado tequila, Cynar, apricot, bitters, orange peel, served on the stem.
Peppery tequila is the dominant flavor note here, with a dry bitter finish. This is a tequila cocktail that will pair well with food.
5. The Lone Palm  house spiced rum, lime, grapefruit, honey, bitters, served on the stem.
One of the two crowd-pleasers on the menu, the Lone Palm has that lime-grapefruit-honey flavor combination (often seen at Heaven's Dog) with which it's hard to go wrong.
6. Rock n’ Rolla  bourbon, apple, lemon, maple, allspice, bitters, nutmeg,
served on the rock.
The other crowd pleaser and the top-selling drink by far at Lolina. It's all about apple cinnamon with maple in this one. Even your grandmother would like it.
7. Bergen St.  aquavit, Plymouth gin, lime, vanilla, Galliano, absinthe, served on the stem.
This cocktail was created by Lane Ford and rolls over from the previous menu. Despite all the ingredients it screams Gimlet in flavor profile. The aquavit, absinthe, and Galliano all dance around the anise flavor note.
8.  Oaxacan Cross  mezcal, ruby port, lime, pineapple, ginger, maraschino, orange peel, served long.
The pineapple juice was a little vegetal tasting on the day of my visit and maybe that's the reason, but overall I just couldn't get into this mezcal cocktail. But heck, one out of eight ain't bad! 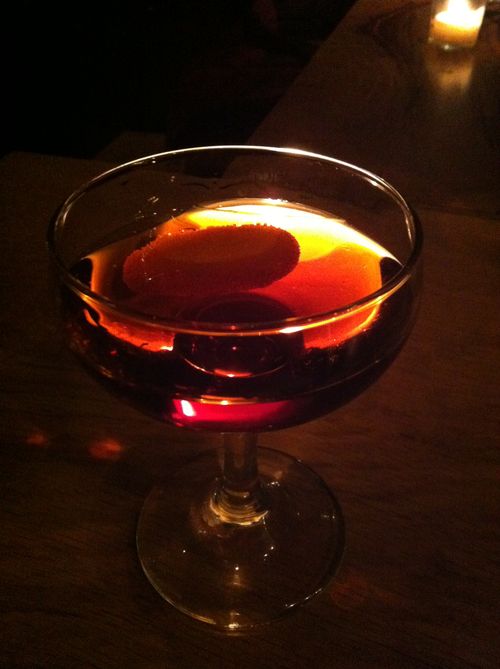 The Carpenter's Hand by Chris Lane at Lolina in San Francisco

Truly impressive for a first menu. A great array of drink choices here and plenty of room in the place to enjoy them with a group of friends.

I've made the first two drinks at home using the recipes from Serious Eats and I agree, they're both excellent. I'm looking forward to trying the Flor de Jerez cocktail tonight (recipe snagged from good ol' Gary Regan via my friend the Google). Definitely going to have to visit SF one of these days with all the articles I've been reading about the cocktail scene there.

Any idea of the recipe of the Rock n' Rolla? That thing goes down way too smooth for me to make it on my own, but not a bad one to have in the repertoire.