Sugar House in Detroit has launched a new cocktail menu with both seasonal drinks and 100 Classics "carefully selected & perfected for your consideration".

I asked Dave Kwiatkowski what the criteria were for being on the list - Most popular? Essential? Best?

His answer was a little bit more involved than I expected but interesting.

I started out by picking my favorite classics (Manhattan, Sidecar, Gimlet, etc.) and made each one, dialing in the recipe until I was happy with the result. Once I had those (maybe 40 all in all) I started digging thru old books, looking for familiar names that maybe I had forgotten about (Stinger, Presbyterian, Suffering Bastard,) - stuff that I couldn't make by memory, but wasn't completely unknown to me. I went thru and made each one of those, keeping some, ditching some. At that point I probably had 75, so I started going thru any old books I could get my hands on and trying out anything that looked interesting... The fallout on these last recipes was much greater (if you've ever actually made the drinks in Baker's Gentleman's Companion you know what I'm talking about.) But after a while I found enough to fill out the list that I could get behind. That's where the drinks like the Hanky Panky, Brown Derby, etc., came from. Some of them, like the West India Couperee (cognac, cointreau & vanilla ice cream) are amazing, but it's just not worth having ice cream on hand in the off chance someone orders one of them. And then of course there were some revisions like when Wondrich unearthed the original recipe for the Singapore Sling (my recipe was totally wrong), and Beachbum Jerry found the Zombie recipe from Don the Beachcomber's...

So, I suppose if I had to categorize this list, I'd say they are the 100 best classics I've ever heard of and made with satisfactory results. Every drink on here I consider an excellent mixed drink. Having said that, there's always room for change.

So here they are: 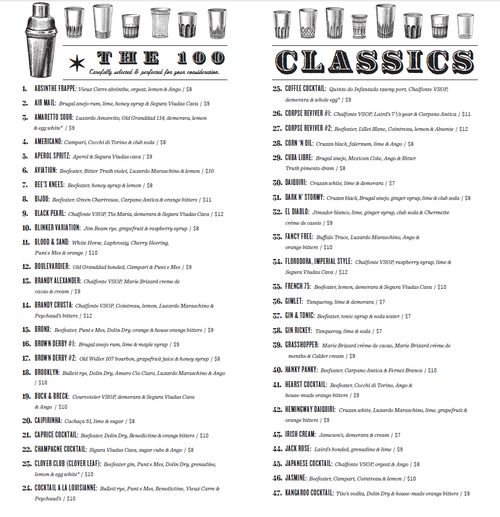 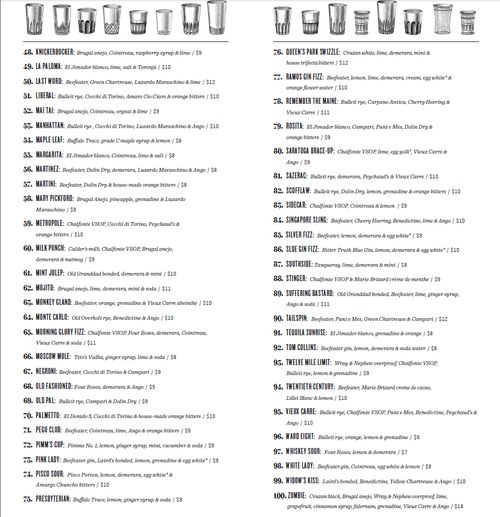 It might be fun to compare these with the 100 Classic Cocktails Bobby Heugel Says You Should Try.

The seasonal drinks look pretty good too. I've pasted them below.

Ceremonies Out of the Air 9
Brugal Extra Viejo, Nux Alpina walnut liqueur, jasmine syrup,
lemon and yuzu bitters, shaken and served up in a coupe.