In January I flew to London for an event to celebrate the life and career of Harry Craddock, author of the Savoy Cocktail Book. The event was sponsored by Plymouth Gin, which is mentioned by name many times throughout the Savoy.

The tour was attended by Plymouth's distiller Sean Harrison, the top London bartenders, and a few special folks flown in from around Europe. Just a few of the bartenders presernt were Ago Perrone, Alex Kratena, Esther Medina, Gareth Evans, Geoffrey Cannilao, Stuart McCluskey, and Nick Strangeway. They helped bring over Erik Ellestad from San Francisco; probably the only person to make every cocktail in the Savoy.

American Bar head bartender Erik Lorincz came up with the idea initially, and he was joined by former Savoy head bartenders Peter Dorelli, Salim Khoury, and Victor Gower. Gower had actually met Craddock.  To study Craddock's life, they enlisted Anistatia Miller, co-author of the just-released book The Deans of Drink that is about both Craddock and Harry Johnson. Max Warner, on his last day as brand ambassador for Plymouth, helped lead the show.

We began at the recently-discovered grave site of Harry Craddock. Craddock died at age 87 in 1963, unfortunately poor despite a life of fame as a bartender. We toasted to him, took a picture, then piled in to vintage cars from around 1930 (when the Savoy came out) to hit a few spots where Craddock worked. 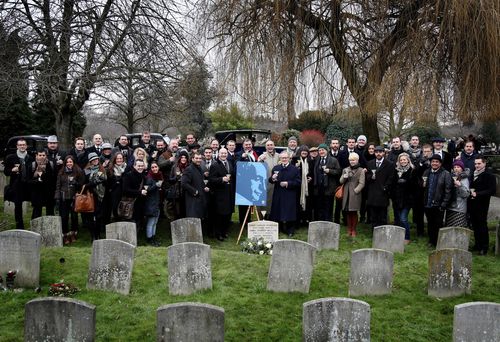 Craddock was born in 1875 in England, but moved to the US in 1897. He worked there at some of the most popular bars including the Holland House, Hoffman House, and Knickerbocker. He was said to have mixed the last pre-Prohibition cocktail in the USA.

He left the US after Prohibition and never returned, though he may have made drinks off the coast of New York on a boat (where it was legal) for millionaires at one time. 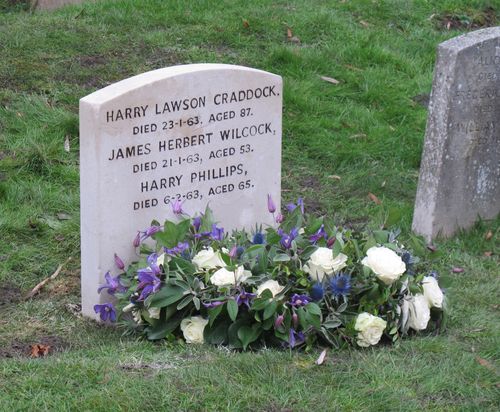 The American Bar at the Savoy Hotel

In the early 1900s, despite having "American Bars" (usually denoting the use of ice and serving the fashionable cocktails of the US), the drinking scene was reportedly quite bad. So Craddock's entrance onto the London cocktail scene was a big deal, and everyone loved his American accent.

The Savoy had two female bartenders on staff, including the famous Ada Coleman, creator of the Hanky Panky cocktail. According to Miller, Craddock basically got Colemand and another female bartender booted from their positions at the bar, as he didn't believe woman should be doing that job. (They didn't have Speed Rack in 1921.) Craddock took the Head Bartender position in 1925.

Craddock became super famous in his job at the Savoy. In 1927, Madam Tussaud's even had his figure in the famous wax museum. That same year, the American Bar at the Savoy was redorated in the Art Deco style. When the did this renovation, Craddock was permitted to bury a cocktail shaker containing his creation the White Lady cocktail in the walls of the bar.

Though the bar has been renovated since then, the shaker has never been found.

In 1928, the hotel announced that Craddock had collected 2000 cocktail recipes, both originals and ones from other places. Over 1000 of these were published in the Savoy Cocktail Book in 1930.

Craddock never worked at the Cafe Royal, but it did play a part in his history. The Grill Room there had just been restored to its former glory - the room is a hall or mirrors with gold frames and accents, and red furniture. They specialize in champagne and caviar. According the the website:

It is in this very room that Oscar Wilde fell in love with Lord Alfred Douglas, Aubrey Beardsley debated with Whistler, David Bowie retired Ziggy Stardust and Mick Jagger, the Beatles and Elizabeth Taylor danced the night away. 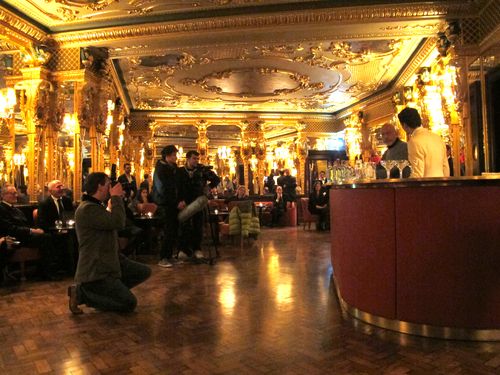 
They do not mention that it was from this bar that the Cafe Royal Cocktail Book was launched in 1937. (The book is significant in that it is the first cocktail book anywhere to include a bunch of recipes with tequila- and Margarita by another name is found in its pages.) The book was not actually a list of original recipes invented at the bar, but was a book of recipes from the United Kingdom Bartenders Guild.

Craddock was the co-founder and first president of the guild, along with Cafe Royal's head bartender. Thus our visit. 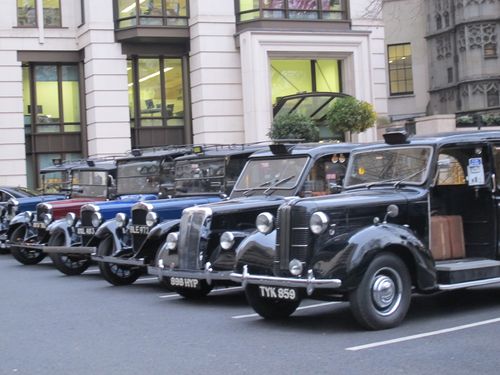 While Craddock was still employed at the Savoy, luxury hotel The Dorchester was renovated in 1938, and they asked Craddock to bury a cocktail shaker with drinks in the walls there also. In this shaker, Craddock put vials containing a Martini, Manhattan, and White Lady, along with recipes and a scroll.  When the bar was rebuilt in 1979, they found this shaker and its contents.

The next year, Craddock left the Savoy after nearly 20 years and went to work at The Dorchester.

Though previously there hadn't been much evidence that Craddock had actually worked at the Dorchester, former Savoy bartender Salim Khoury was given a letter written by Craddock to one of his favorite Savoy customers (who didn't live in London) informing him of his move to the new hotel. 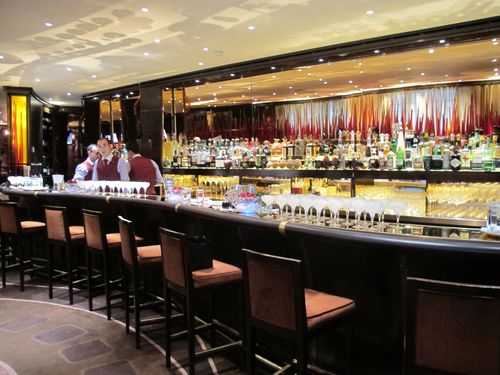 Since this hotel was recent and built of reinforced concrete, it became one of London's safest buildings during the Second World War. Though we don't know for sure that he served them, Winston Churchill stayed at the Dorchester and so did Dwight D Eisenhower. Given Churchill's fondness for booze, the two probably got together.

Though Craddock worked at the Dorchester until 1947, he still opened one more bar; a place called Brown's Hotel in 1951.

Though our town didn't visit that spot, we returned to the Savoy for a final moment. Cocktails were mixed up and poured into vials. The vials were put into a shaker and sealed. And that shaker was buried in a wall in the Savoy Hotel in tribute to Harry Craddock.

As Max Warner said, Craddock didn't get a grand funeral, but he certainly deserves a grand day of remembrance. 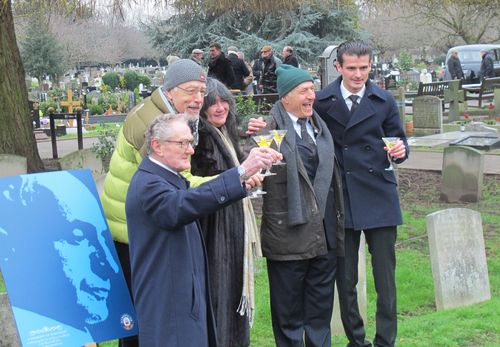 Thank you to Erik, Anistatia, Max, everyone else who helped put on the day, and to Plymouth Gin for making it all happen.

This is a fantastic story!! We are going to post this on our Twitter if you don't mind..its Damien at http://www.socialandcocktail.co.uk/ btw.

"Harry Craddock, 74-year-old bartender who claims to have invented 250 cocktails, including the "White Lady" and "Paradise" has retired from the bar of the Dorchester hotel in London."

hallò, I'm search a photo of the harcover of the fist edition of the savoy cocktail book for make e restauration of my copy! i hope that you have the possibility of aid me! thank's! acv09@libero.it