Book Review: The Deans of Drink, about Harry Johnson and Harry Craddock

The Deans of Drink by Anistatia Miller and Jared Brown is a biography of bartenders Harry Johnson and Harry Craddock.

Harry Johnson is famous for his book, Harry Johnson's New and Improved Bartender's Manual from 1882. (Apparently there was also an 1860 that nobody can seem to find.) Johnson worked as a bartender in San Francisco, Chicago, Ne York, and Philadelphia.

Harry Craddock was a London bartender and author of the Savoy Cocktail Book from 1930. You can read all about him in this previous post on the matter. 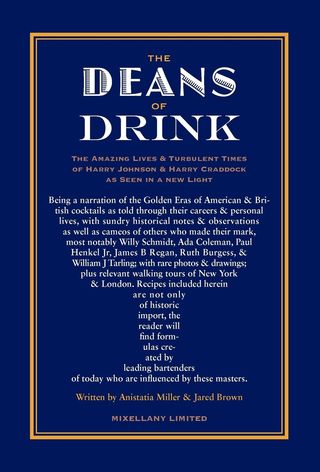 The Two Deans details the lives of these bartenders, but also others including "The Only William" Schmidt, Ada Coleman, William J Tarling, and more. Thus the lives of these bartenders are put in context with the times in which they lived and worked - the German influence on American bartending; the effects of US Prohibition; women in bartending, and the other important bars of the day.

Beyond the text, the authors offer up several illustrations and cocktail menus, list recipes for important cocktails in the books, and for each Harry have a section of "liquid tributes" to these bartenders and their creations by some of today's top mixologists.

My favorite parts of the book, though, are at the end of each section, where the authors list the addresses and information about the bars in New York and London where these guys worked, and what is there now. That way after reading, you can visit all the sites (several of them are still there) you've just read about.

While not nearly as thorough as David Wondrich's biographical information and cocktail archeology in Imbibe, for example, this book provides an important look at what happened to American and ex-patriot bartending in the years after Thomas through the 1940s.

what was the german influence on american bartending?

From the German bartenders like Johnson and Schmidt. There is more to it than just 'they were German' but I'm trying to think of specific examples where German ingredients snuck into American cockatils, etc. I attended a seminar by Jared and Anistatia on this topic about 4 years ago but can't recall specifics just now (coffee hasn't kicked in yet...)