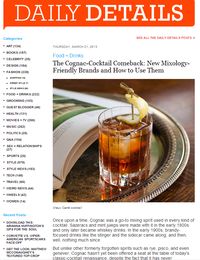 In my latest story for Details.com I wrote about the new cognacs designed with mixology in mind.

I ended up rewriting the story to be less nerdy than the first version, but the first version has more dates and price specifics. I pasted that stuff below, but you'll want to visit Details for the intro.

But a few brands are coming around. One of the first to do so was Courvoisier, which launched Exclusif in 2007, and was billed as “the only cognac designed specifically to be mixed.” But bartenders balked at its $50 retail price. It was discontinued, and last year replaced with C by Courvoisier for the much more doable $35.

Hennessy came out with Hennessy Black in 2009, their first new product to the US market in about 50 years. It was targeted more at the Cognac-and-Coke nightclub crowd than at mixologists, and was developed to have a “lighter and fresher” profile than their other products. Taking the opposite approach with a “bold flavor” that shoves through the soda instead was D’USSE Cognac, which launched last year.

Most of these new cognacs eschew the standard VS/VSOP/XO age statements, but are quite young in order to keep costs down. D’USSE is a rare exception that puts its age category – VSOP – on the label. It’s more expensive than most of the mixable cognacs at $45, but is marketed as a club luxury product whether you mix it or not, complete with Jay-Z-hosted launch parties.

Remy went in a radically different direction with the launch of Remy V in 2010, which is a clear, unaged cognac that can’t legally be called cognac. It can use cognac’s caché, however, to try to win over Grey Goose bottle service drinkers at clubs, or at least that seems the plan.

A few new cognacs are playing fully to the high-end cocktail crowd. H by Hine, launched at the end of 2012, was “crafted with mixology in mind” as the cellar master consulted with a French bartenders association to create it.

The story continues with information about high-proof cognacs and a few things to do with these products.