But I haven't given the book a proper write-up yet, so here's this. 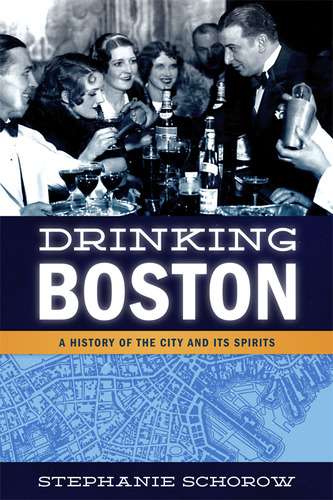 The book is a history of drinking in Boston, from the earliest days of the tavern culture in th 1600s right up through today's cocktail renaissance. The first 70 or so pages take us through the taverns of Boston and their crucial role in the American politics and revolution.

Then we take a step back and look at Prohibition, from early movements through to national Prohibition of 1920-1933 and the thriving speakeasy culture. Prohibition takes us another 50 pages. We then look at a history of Boston's beer brewing, its neighborhood bars, and modern cocktail history.

Because the chapters are thematic and not all a linear narrative history, there tends to be some repeated information in different chapters. That's nothing I'll mind on subsequent reads when researching a particular topic, but it was a little annoying when I read the book from beginning to end. No biggie.

The early history of the tavern culture in Boston is done well, but for a more thorough look at this (and of American bar history in general), pick up the wonderful America Walks Into a Bar by Christine Sismondo.

Because of my familiarity with the earlier information, I was most excited for the brewing history, the era of the big nightclubs in the 1940s, the Great Molasses Flood,  some of the modern bartenders' history, and the new characters and events of which I was previously unaware. After I put the book down, my Amazon Wish List grew by about 8 books on subjects inspired by this reading.

I think that no matter your interest level in different historical eras or aspects of bars, bartenders, or drinks, you'll find new information in Drinking Boston to add to it and to inspire further reading.