London Bars: Shoreditch and Around

In London, one of the best areas for bar-hopping is Shoreditch. It seems to be a nightlife neighborhood filled with smaller pubs and a few clubs with some of the city's best cocktail bars smattered about.

Ones I've been to include in the neighborhood include Callooh Cally, Nightjar, Worship Street Whistling Shop, and Happiness Forgets.

On my visit to these bars I took a long walk from my hotel, the budget-priced Tavistock Hotel that I'd recommend for those who can't afford the usual $350+/night rooms of London. (Even looking on AirBnB I couldn't find of anything much in neighborhoods I wanted to stay in for less than $150/night; this hotel cost about that with taxes and all.)

Along that walk I popped into Zetter Townhouse, a great little bar/cafe with drinks by Tony Conigliaro of the famous 69 Colebrooke Row. On the street is Zetter Hotel and behind it is the townhouse; a boutique hotel on the ground and basement floors of which is the bar/cafe.

I was there on Sunday afternoon, and the cafe was filled with small groups enjoying the brunch whilst food sitting on the plush red chairs. The whole room had this bohemian glamour style with red wallpaper, fancy lamps, and fringe accents. The tiny bar had just four barstools in front of it, so this is really more of a lounge than a bar- at the time I was there the bartender was acting more as a barista to the lunch crowd than as a mixologist. 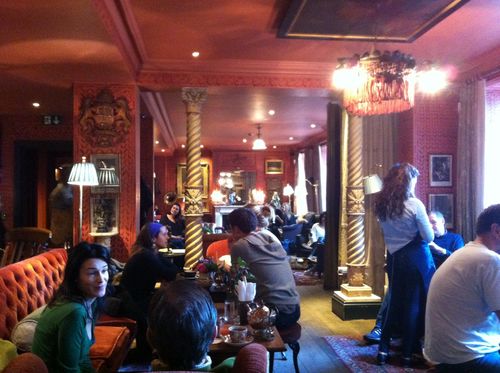 I enjoyed the Flintlock, which I remember as a signature drink of Conigliaro's. It's made with gin, gunpowder tea tincture, sugar, Fernet-Branca, and dandelion-burdock bitters. You can find the recipe in Conigliaro's book Drinks, which I've heard will be printed as a US edition (American measuring units rather than metric) next year. When they serve it they light a piece of magician's wool next to the drink, which flames up and dissappears. The cocktail was delicious, even for the first drink of the morning.

I then had the Milk Collins, made with gin, lemon, soda, sugar, and milk syrup. The latter is a wine-based lemon syrup that is washed with milk as in some milk punches. All the drinks were 8.50 pounds (13 bucks US), which is not bad for London.

I've been to this bar once or twice previously, and love it. The menus all have a sense of humor to them - a previous one was drawn as a comic book; the current one was a Pantone menu. There is a main room, a back room, and also an upstairs lounge that I didn't know about until this trip. 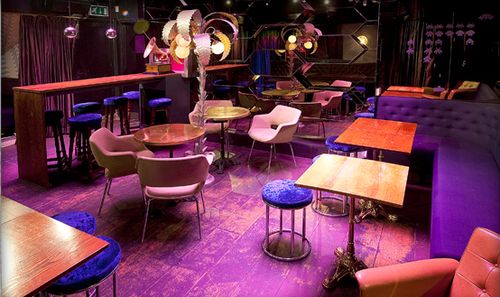 The upstairs room is quite small, and available to members. (I don't recall if there is any actual membership fee.) Upstairs is run by a single bartender, who takes a 'residency' there for four weeks. They develop their own cocktail menu and own theme for the month. The theme when I visited was cocktails from the movies; in March it's oysters and absinthe. I *love* this idea.

I'd not been to Happiness Forgets previously. It is a small and very hip cocktail bar that was completely full even when all the other bars in the neighborhood were quiet on a Sunday night. 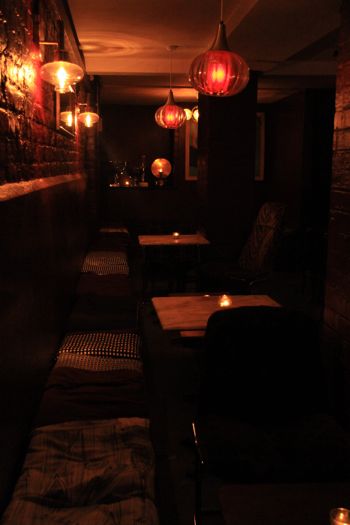 This is about as much as you can see inside, too. Image stolen from their website.

There I had some of the booziest drinks (all costing around $12 US) in my time to London (outside of the Duke's Hotel, of course). I guess the drinks were strong enough there that I didn't take any notes about them except "Boozy drinks. Rich flavors," which is right up my alley.

I seem to recall having the Jerezana cocktail, which is made from manzanilla and amontillado sherries with sweet and dry vermouths, plus vanilla syrup and orange bitters. Hell to the yes. 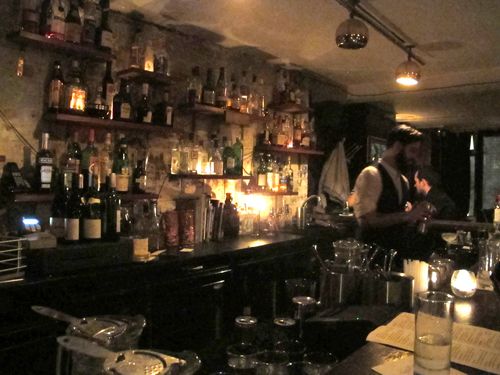 True to its name, I was happy in this bar and forgot all about it.

I have visited Nightjar in the past and loved it, and after this visit I'm even more in love. Nightjar is known for its spectacular garnish program (great pictures here). On this visit, one drink had a dehydrated whole lime floating atop the drink. Another was served inside a giant half cocoa bean pod; a third had a meringue topping. 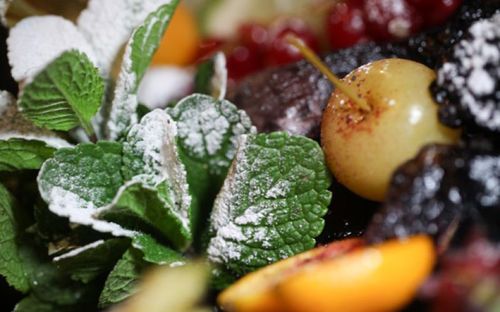 (stolen from Nightjar's website; my pics were too dark)

On this visit, nearly all of the cocktails tasted as great as they looked as well.

So given one night in London and traveling on a budget, this is definitely the neighborhood I'd recommend checking out.

Very enticing and useful report, Camper! We'll be in London in May and, along with our sine qua non visit to Nightjar, we'll have to check these out.