Here at Tales of the Cocktail in Buenos Aires, taking place at the Intercontinental Hotel, I have attended three seminars on one day. The last one was about the science of cocktails. Below are my notes- these are hard to translate from science slides to text, but here goes:

The Science of Cocktails: Ice, Infusions, and Insight by Don Lee and Mike Ryan

In cocktails being precise is more important than being accurate - it's better to have all drinks be exactly the same than have the occasional one be perfect. That's an argument for measurement in cocktails.

Don Lee measured the amount of dashes when you dash bitters - to see how accurate a dasher was and how that changes over the course of a bottle. He found that it changed over time, but on average:

Salad dressing oil and vinegar doesn't mix because one is polar and one is non-polar. 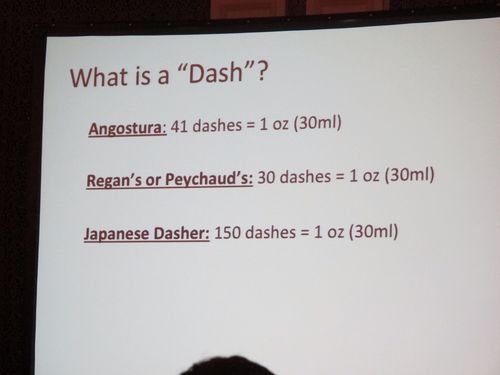 No matter what the temperature the ice starts at (freezer vs. well ice) when shaking, the drink cools to the same level. So colder ice doesn't result in a colder drink at the end.

It also doesn't matter if you're using big ice or small cheater ice when shaking-it all reaches the same final temperature in that same time- in about 15 seconds. This is because small ice has more surface area, and on that surface, water that sticks to it and makes the drinks more dilute without great cooling (because it releases a lot of energy to convert ice to water). But if you shake with dry (non-wet) vs. regular wet ice, you get less dilution from dry ice. So shaking with dry ice doesn't make drink colder but there is less drink dilution.

Stirring- things are different. You will get to the same dilution with different ice at the same rate- but you have to stir for a ridiculously long time for that to happen and most people don't. However stirred drinks have less dilution at a normal stirring time, and softer silky texture.

"Cooking ice" - letting it sit on ice and then stirring it later to get a drink colder - this is a myth. It will get just as cold as a stirred drink in the same amount of time. Only when you are actively stirring does it get really colder.

In stirring a drink, it takes a lot longer to do this, so using the smallest ice cube (without surface water - so right from freezer) makes drinks coldest fastest. But of course this is not practical in a bar.

Infusions- consider it with the following variables: base liquid, ingredient you're infusing, the surface area of that ingredient reacting with the base, time, temperature of infusion, and filtration method to get that infusion solids out. 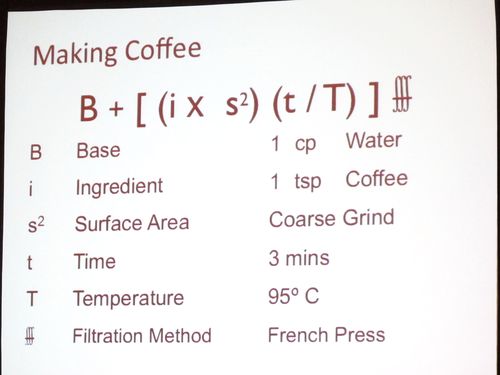 In whisky, you could consider the barrel as being the thing infused. With gin, the filtration method is the type of still - Carterhead vs. other stills. Small batch bourbon - small barrels are larger surface area. But these same factors affect regular infusions we would make at home.

Fat Washing - Surface area in fat washing is the width of the container- where the two liquids are touching. So wide pot = faster fat wash. 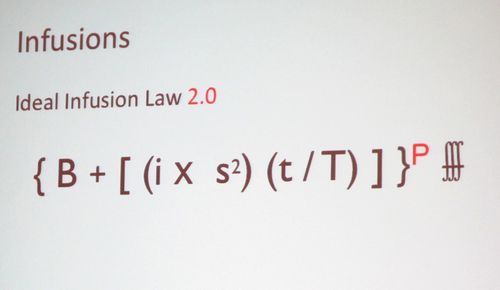 Including Pressure in the Formula


Don Lee came up with a formula for infusions, and then a second one including pressure in the equation. Pressure comes in when you use an iSi Soda Canister or a vacuum sealer.

Negative pressure infusions = vacuum = good for putting liquid flavors into solids. (So the solid thing is being infused.)

Positive pressure infusions = iSi soda siphon = good for getting solids flavors into liquids. Don says 5 minutes under pressure and 5 minutes after venting can be the equivalent of weeks of regular infusing. Flash infusions won't extract as many tannins (soluble in alcohol) as flash infusion so you get different results than just letting things steep in alcohol.

Can use a superbag to get most of color out of quinine powder for homemade tonics.

For clarificaiton using agar agar, a refinement is: Agar + Superbag + Salad Spinner = ghetto-fuge that will get liquids out of agar gel the best and most efficient way. A superbag alone if you squeeze it will get agar into final drink. ghetto-fuge is a solution to that.

At least as it is written above, the point about ice in a freezer vs. ice well seems to be a misunderstanding of what Cooking Issues published a while back.

"If your ice is in the freezer, it can chill your drink before it starts to melt. The ice will lower the temperature of your drink while getting warmer till it hits 0° C. After the ice gets to 0° C, it doesn’t get any warmer. ALL FURTHER CHILLING IS DONE BY MELTING ALONE"
(http://www.cookingissues.com/2009/07/24/tales-of-the-cocktail-science-of-shaking-ii/)

In other words, ice stored at -23° in a freezer will indeed make a colder drink than ice in an open ice well, which is right around 0°.

I would love to further explore the science of optimal infusion time and temperature. Do you have a legend for the "ideal infusion law"?

Keep up the awesome,
Kevin

Makes sense - most likely I mistated the assumption. It could be that the premise was to get a drink to a final temperature it wouldn't make a difference between the ice, as freezer ice isn't cold enough to get the drink down to a final desired temperature (need the big energy released from melting).

Anyway, thanks for your clarification.

I added an image with the infusion law with a legend and their refinement with pressure.